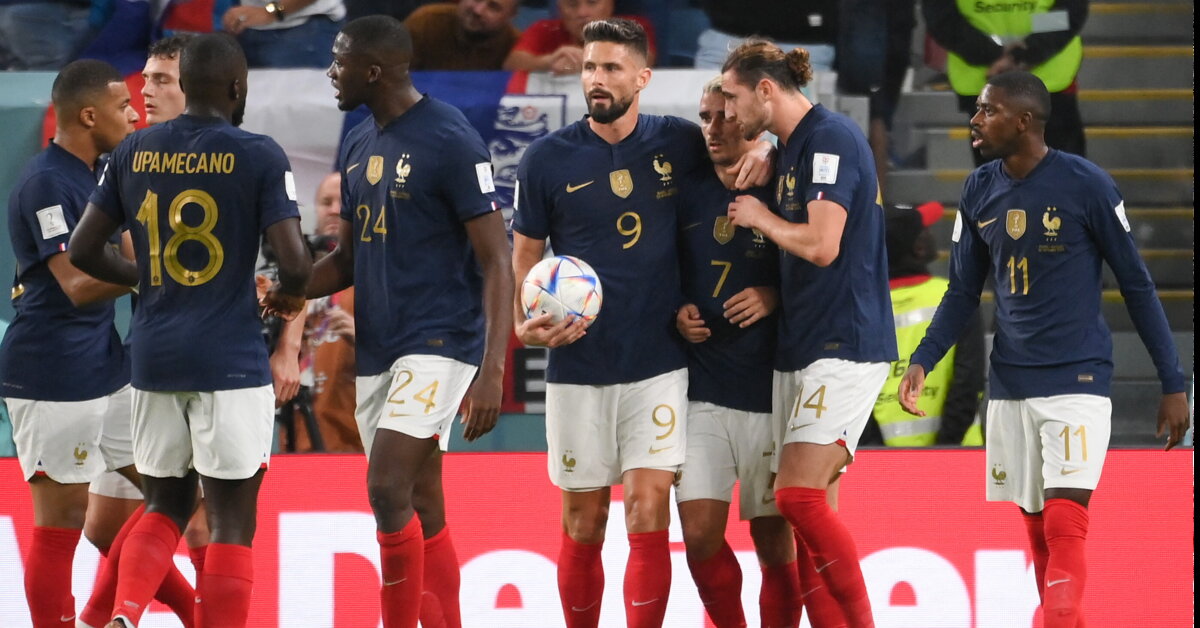 At the Al Janoub Stadium Goodwin opens the dance, then Deschamps’ men overturn the result and rampage. Olivier signs a brace and hooks Henry at the top of the Blues bomber standings

France’s World Cup kicks off with a poker show. In the first round of Group D the reigning world champions they beat Australia 4-1 comeback and start strong in Qatar. At the Al Janoub Stadium the goal by Goodwin (9′) surprises the Blues, then the men’s deschamps they react, rev up and rampage. In the first half Rabiot (27′) and Giroud (32′) overturn the result, then in the second half Mbappe (68′) and again the AC Milan striker (71′) close the accounts.

THE MATCH
France responds present in Qatar and sends a loud and clear message to the other big candidates for the final victory. After a muted start, Deschamps’ gang holds its nerve, clings to the quality of its jewels and overwhelms Australia in terms of games, rhythm and results. Scoreboard in hand Giroud is the man of the match with a splendid brace that takes him to 51 goals for the national team like Henry. But on a tactical level, it is the positions of Rabiot and Griezmannn and the accelerations of Mbappé that break the bank. Free to move between the midfield and the attack, the “Petit diable” is relentless between lines, an inexhaustible source of ideas and verticalizations. As for the Juve midfielder and the PSG phenomenon, the impression is that together they make up a perfect mix of quality, quantity and power. All with still some balance to record and devastating firepower despite the many absences.

Without Benzema, Pogba, Kantè, Kimpembe and many other important players, against Australia Deschamps is betting everything on Giroud in the center of the attack with Dembélé, Griezmann and Mbappé in support. With front-wheel drive, France started strong and tried to immediately put Australia on the ropes by pushing from the outside. Without rhythm and intensity, however, Deschamps’ men did not break through and at the first good opportunity Arnold’s gang sensationally unlocks the match. Caught with the rev counter by a change of play by Souttar, Leckie jumps the man on the wing and serves Goodwin the lead ball. Goal that freezes the French rearguard and also leads to the injury of Lucas Hernandez, who was immediately replaced by his brother Theo. Coldly punished, France takes the blow and takes a few minutes to sort things out. The first to react is Mbappé, but his incursions are too solitary and are not enough to disrupt the crowded Australian defense and wake up Giroud. Under pressure, Deschamps’ team spun the ball well, but the phrasing was too slow and Arnold’s men held up the impact, even scaring Lloris with a right foot near Duke’s cross after a clearance error by Theo Hernadez. An error that the Rossoneri full-back immediately made up for by serving Rabiot with the assist for the draw. A gore that together with Griezmann’s retreat in the median puts France back on track and changes the match. More orderly and aggressive, the reigning world champions increase their laps, press on the frontline and sink the shot again with Giroud, precise to back a pass from Rabiot into the net. Doubling that overturns the result and gives more thrust and confidence to the transalpine maneuver. In the lead and in control, Rabiot & Co. dribble with precision in the midfield, take possession of the outside lanes and collect bursts of opportunities. Giroud, Dembélé and Griezmann didn’t find the goal from a good position, then Mbappé devoured the trio and a header from Irvine closed the first half by printing on the post and scaring Lloris.

The second half began with a spectacular bicycle kick from Giroud following a perfect cross from Theo Hernandez and with France trying to manage the match with possession. Taller and with Grizmann acting as the glue between the midfield and the attack, Deschamps’ team dominated the game, maneuvered well in range, recovered balls immediately and got the game going. Rowles anticipates Mbappé after a great back-heel play from Giroud, then a header from Konaté goes high and Behich saves a left foot from Griezmann on the line. Shots that give the shock and prepare the ground for the French show. In fact, the couple Mbappé-Giroud will take care of putting an end to the match. The first signs the trio of headers by deflecting a brushed cross from Dembelè into the net, then Olivier drops the poker again with his head on a perfect assist from the PSG phenomenon. Goal that closes the accounts and brings the Rossoneri striker in the history of France next to Henry in the all-time ranking of national team scorers. France starts well in Qatar and scares everyone.

THE STATISTICS
• Olivier Giroud scored his 51st goal in all competitions for France, equaling France’s all-time leading goalscorer Thierry Henry.
• At 36 years and 53 days, Olivier Giroud is the second oldest player to score a brace at the World Cup after Roger Milla in 1990 (38 years and 34 days).
• Olivier Giroud (36 years and 53 days) became France’s oldest World Cup goalscorer tonight (surpassed Zinedine Zidane) and the oldest Frenchman to play in a World Cup match.
• Adrien Rabiot is the second player to score on his World Cup debut for France this century, following Karim Benzema in 2014.
• 3,077 days elapsed between his first goal at the World Cup and the first of Giroud’s goals tonight – the longest between two goals by a French player in the competition.
• Didier Deschamps became the first French manager to collect ten World Cup victories (W10 D2 L1).
• France have scored at least four goals in back-to-back matches for the first time at a World Cup; they are only the third club to do so this century, after Brazil in 2002 and Germany in 2010.
• Olivier Giroud is the oldest goalscorer (36 years, 53 days) for a European team at the World Cup (own goals excluded) since Georges Bregy in Switzerland-USA in 1994 (36 years, 152 days).
• Adrien Rabiot is the first France player to score and assist on his World Cup debut since Christophe Dugarry against South Africa in 1998.
• Kylian Mbappé became the fastest French player to score five World Cup goals (23 years, 11 months), surpassing Just Fontaine in 1958 (24 years, 9 months).
• France are the first team to score three headers in a World Cup match since Germany against Saudi Arabia (five, in 2002).
• France won a comeback in the World Cup for the fifth time overall and for the second time in the group stage, following a 7-3 defeat of Paraguay in 1958.
• Craig Goodwin’s goal (8:23) is Australia’s fastest since the start of a World Cup match.
• Theo Hernandez is the first French player to participate in a World Cup substitute goal since Paul Pogba against Switzerland in 2014 (one assist).

David Martin is the lead editor for Spark Chronicles. David has been working as a freelance journalist.
Previous Angelina Jolie for children’s rights
Next What to see tonight on tv? Tips for Tuesday 22 November