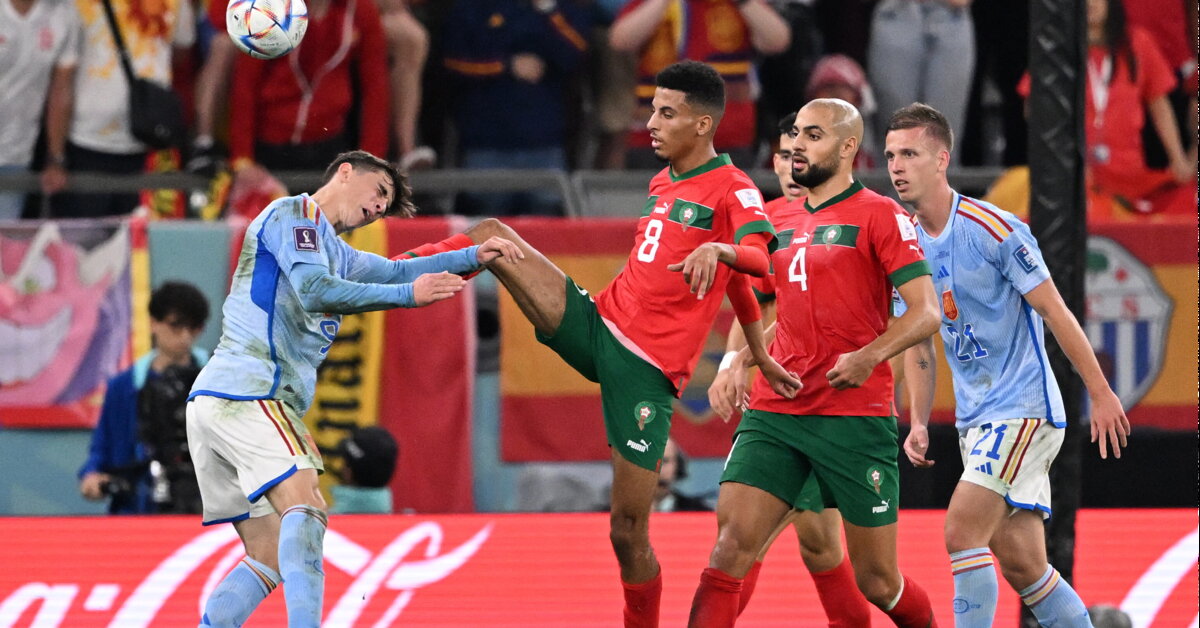 World Cup 2022, Morocco in the quarterfinals! Spain beaten on penalties

The Morocco he’s in the quarterfinals ai World Cup 2022 in Qatar after clearing the Spain on penalties. The wall erected by Regragui’s formation resisted for the entire 120′ of the game, but even beyond with Spain unable to score a single shot from eleven meters making a mistake with Sarabia, Rodri and Busquets. Decisive for the Moroccoto the best result in its history at the World Cup, the spoon of the former Inter player Hakimi after the goals of Sabiri and Ziyech.

Everyone was waiting for her and the surprise in the round of 16 of the World Cup 2022 in Qatar it came at the hands of Morocco. African selection eliminated the Spain from Louis Enrique, who started the tournament by scoring seven goals against Costa Rica and receiving worldwide praise. The Iberians, however, hadn’t come to terms with the defensive phase imperforable of Morocco by Regragui who in four matches in this World Cup, including penalties – and it’s incredible – has only conceded a goal when he scored alone (unfortunate own goal against Canada). After 120 minutes in which the occasions were few and well divided with Cheddira on one side and last-gasp Sarabia on the other, from the penalty spot there was no story: 3-0 for Morocco and clean sheet also from eleven meters for Bounousomeone who is building his career in goal in Spain.

The script of the match was almost the one imaginable already on the eve with Spain in full control of ball possession and dribbling, but with Morocco with two faces. In the first half Thank you asked his boys for an aggressive game in a 4-5-1 ready to bite the ankles in the midfield of the Spain in order not to allow him to crash or triangulate. Mission accomplished, many mistakes for the Spaniards and no shot on goal by Bounou. Indeed, first Mazraoui and then Aguerd came close to taking the lead.

In the second half the pressure of Morocco it has lowered as well as the center of gravity, taking away depth from the maneuver of the Spain and forcing Busquets and his companions to often play horizontally even after Morata’s entry into the trident. The exaltation of the technique of the Red Furies went out against the neat and no-nonsense defense of Saiss and El Yamiq, with Spain without a man capable of engaging one-on-one decisively to break the bank. Nico Williams tried in the final ten minutes, but without finding Morata’s winning play in the middle of the area while in the 91st minute Unai Simon took a big risk on the dribble.

However, the greatest opportunities on both sides came in extra time. Morocco came close to scoring twice with the Bari striker Cheddira, stopped with his feet by Unai Simon in the 104th minute and by too many dribbles ten minutes later. Spain, on the other hand, stopped at Spiked post by Sarabia in the 123rd minute, who came on a few minutes from time to take the penalty in the final series and, as almost always happens, missed it by hitting the Bounou post for the second time. The beginning of the end for Spain who have eleven meters also wrong with Rodri and Busquetsleaving in Sabiri, Ziyech and Hakimi (with spoon) the honor of the party for a historic milestone.

• Today was Spain’s fifth World Cup shootout, the most on a par with Argentina. He has lost four times; the most in the history of the competition.
• Morocco are the first African national team to win on penalties at the World Cup, only the second time an African team has contested it (previously Ghana 2-4 Uruguay in 2010).
• Spaniard Rodri became the first player (since 1966) to complete more than 600 passes at a single World Cup (637), with the previous record set by another Spanish player (599 – Xavi in ​​2010).
• Spain have played extra time for the fifth time in a row between the Euros and the World Cup.
• Spain attempted just one first-half strike against Morocco; at the World Cup, since 1966, he had always made at least two shots in the early stages.
• Sergio Busquets equaled Sergio Ramos and Iker Casillas as the Spanish player with the most World Cup matches (17).
• Spaniard Gavi (18 years 123 days) is the youngest player to start a World Cup knockout match since Pelé in the 1958 final (17 years 249 days).
• Achraf Hakimi and Hakim Ziyech became the players with the most World Cup matches for Morocco (seven), overtaking Mustapha Hadji (six, like Romain Saïss).

David Martin is the lead editor for Spark Chronicles. David has been working as a freelance journalist.
Previous +++From Magenta to New York, the dream of Matteo Belletta – self-taught talent – has come true: his (successful) life in the Big Apple
Next The Devil Wears Prada, Anne Hathaway rules out a sequel