In front of my usual newsstand I meet a middle-aged gentleman I don’t know. He notices that my gaze fell on the sports head he has just bought and he says to me: “Now the soccer he’s in the recovery room.” And I think to myself that the toy is definitely broken by now; a death foretold in the Arabian peninsula, from where we receive an overdose of television images in apologetic celebration of horrifying Qatar 2022 World Championships. Whose first gravedigger has the arrogant face, like a dull Cominform bureaucrat, of Gianni Infantino; the Swiss lawyer with an Italian passport who has presided over Fifa (supreme board of the football capital) since 2016 and pursues the goal of eliminating any position taken in the stadiums that could disturb the oppressive repressive culture of the patriarchal delirium in vogue in the host country.

The only concern of the petrodollar-hungry Zurich-based football Sanhedrin, which claims to turn players into opinionless puppets, much less outrage, and the quadrennial event, an immense world showcase, in a laundry of the wrongdoings against their own populations – women and workers above all – implemented by the anachronistic dynasties in power in the Arabian Peninsula. That propaganda showcase that is turning out to be the mirror of fearful involution of the game with the largest number of fans on a planetary level and which has fascinated generations, producing passions and related mythologies. 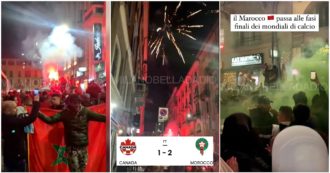 World Cup, the enthusiasm of Morocco fans in Milan: hundreds in Corso Buenos Aires to celebrate qualification for the second round

The incessant mythopoetic work that is becoming even annoying in the mouth of its most accredited celebrants; like the commentators in search of the wonderful at any cost type Federico Buffa and the epigone Lele Adani. That Adani who made his mark in his transition from free-range and free commentator (albeit always at the risk of ending up crushed by digressions, like Laocoon by the snakes) in the talk show “Bobo TV” (where he still Anthony Cassano resists not to drink it in his “bread and salami” style) to the sitting rooms of the thinkable thought of mamma Rai; in which he offers us clichés between the apologetic and the consolatory by celebrating the cult of Diego Armando Maradona (the sinister magical son of the Bonairen slums, friend of pushers and of an imbolsito Fidel Castro, whom he defines as none other than “one of the most influential men of the century”), reiterating demagogic hierarchies (Pele second to Maradona, despite having two magical feet and superior acrobatic skills, as he would only celebrate his triumphs in Brazil. Ridiculous thesis to belittle those who have won three Rimet around the world: Sweden, Chile and Mexico. And he would have won another – English – if a Bulgarian hadn’t crippled him).

An unbridled passion for Platensian players, which makes him unleash on November 26th, in trance from possessed to the cry “everyone stand before the best player in the world”, for a goletto from outside the area of ​​the Argentine export Messi (he gave his best in the protective Catalan habitat) with a certain complicity of the late Mexican goalkeeper, the elderly Francisco Ochoa (born in 1985). The same “best left foot in the world” who had a penalty saved by the Polish goalkeeper four days later Wojciock Szczesky.

And here we come to the point: Leo Messi and the other superstar certified by the golden balls Cristiano Ronaldo they are now survivors of themselves and of advanced age, reduced to freaks for the show that goes on. But the staging turns out to be extremely modest, without the apparition – Mbappe apart – of worthy successors of the rulers of the last decade: the elusive Barcelona star and the Portuguese with ballistic skills such as have not been seen since the premature retirement of Marco Van Basten, the one on holiday at Paris Saint Germain and about to end up in the gerontocomio of US football, the other frantically looking for the last signing. A sterility to explain, which probably depends on the transformation of a beautiful game into a container for commercials; in its reduction to a financial/stock market mechanism that has dried up everything else. 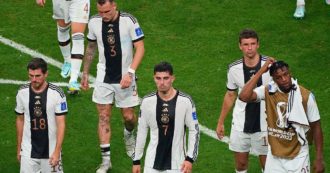 In fact, Germany has already packed, England is a flash in the pan, the Belgian catastrophe (which in addition to the shadow of Eden Hasard fielded the best midfielder around: Kevin DeBryne), we know the miseries of Italy four times world champion, the brilliant Spanish coach Louis Enrique which insists on fake new without the Messi of the good times (or David Villa). And the five-times champion Brazil? Meanwhile he loses with the Cameroon and clings to O’Ney Neymar; an acrobat stunt performer compared to O’Rey Pele, and where did the partners of the “Black Pearl” end up: the Garrinchas, the Santos, Didì and Zito plus Vavà, then the Jairziño, Gerson, Rivelino, Tostao, of whom there are no traces between the current green-gold? All ground from the current football meat grinder.

In short, the end of the European-Latin American hegemonic duopoly. Imploded. Only the Third World is saved (although many players of him militate in the European vampire Barnum). That obscene Qatar is turning out to be some sort of Bandung of football (like the old conference of 1955, which sought a “third way” between the two blocs of the Cold War)? Even today it is cold.

David Martin is the lead editor for Spark Chronicles. David has been working as a freelance journalist.
Previous The Walking Dead cast thanks fans after series finale
Next Emily Ratajkowski opens the new offices of her brand in SoHo, inspired by the 70s