World Cup: Japan wins and qualifies, Germany out of Qatar 2022

Japan beats Spain 2-1 and qualifies for the round of 16 as first in group E, and thanks to this result Germany is eliminated despite the 4-2 victory over Costa Rica. The other qualified is Spain, but as second.

The penultimate day of the group stage at the World Cup in Qatar decided two more pairings for the round of 16, where Japan, first in group E, and Croatia, outgoing runners-up, will face each other on one side. On the other hand, Spain will play against group F winners Morocco. 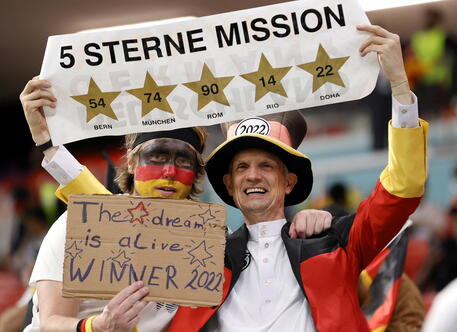 ‘Coloured’ fans inside and outside the stadiums (ANSA)

ON THE DAY OF STEPHANIE FRAPPART, GERMANY FLOP

For a few minutes of her splendid evening, Stephanie Frappart, the first female referee to referee a match in the men’s World Cup, risked witnessing history even more than writing it herself. It was the brief interval between Costa Rica’s 2-1 over Germany – which in addition to the Germans also kicked Spain out of the World Cup – and Havertz’s temporary 2-2 which put the Spaniards back in. It ended with the useless victory of the Germans, a 4-2 that is not enough for them. For the second consecutive time, Germany is out of the World Cup in the first phase, a very heavy flop.

Flick’s national team salutes all the controversies that accompanied their stay, at the end of an emotional amusement park evening. We needed to win and wait for Spain to beat Japan, who instead repeated the surprise and with the 2-1 over Luis Enrique they go to take the round of 16 from before.

It means Croatia, while Spain luckily draws Morocco. Alternatively, the Germans could have netted Costa Rica as Spain did, but that never seemed like a thing. Indeed, the Central American national team was much closer to the qualification that would have been exceptional. Germany pays for a lackluster game and a lot of inaccuracy on goal, against the soft Costa Rican defense and in a game without fouls. In her evening, the first French woman referee only a yellow: hers was a serene and authoritative direction, without flaws (a couple of questionable offsides go to the linesmen). On two occasions, the 2-1 in Vargas and the 4-2 final in Fuellkrug, she had to resort to off-side technology, but she didn’t get upset when – on the final choice – her earphone went off.

More or less like Germany’s light bulb, after a first half that could comfort his fans. For the match of his life, Flick sends Fullkrug back to the bench, savior against Spain, and relies on Muller as the terminal of a formation full of half strikers, from Sane to Gnarby, with the young Musiala instilling verve. On the other hand, the coach of Costa Rica, Suarez, exercises pragmatism and unleashes a double-throw bolt. The line of 5 defenders is thickened from the midfield, but at the start whistled by Frappart, Germany’s assault finds only one real barrier: goalkeeper Keylor Navas.

Musiala shoots after a hundred seconds, the PSG goalkeeper rejects easily and repeats himself on Gnabry’s strong diagonal after a few minutes. On the other hand, he couldn’t do anything in the 10th minute, when Raum crossed from the left undisturbed and Gnabry in the center, forgotten by the markers, headed over to the far post. The 1-0 gives enthusiasm and push to the Germans, but also underlines their limits: Germany is not fluid in maneuvering and wooden when it comes to closing the action. Goretzka also tries in the 14th minute, and always heads, while from outside Gnabry and Sane are imprecise. So in the 42nd minute all Germany shivered, Neuer took care of saving by deflecting for a corner on Fueller, alone in front of goal due to the double mistake by Raum and Ruediger.

Upon his return, Flick inserts Klostermann for Goretzka, moving Kimmich to midfield in search of balance. Before reaching him, Germany hears the news of the incredible Japanese one-two punch on Spain that cuts her off, and inevitably she is shaken. Tejeda takes advantage of it in the 13th minute, with the winning tap setting the 1-1. In the quarter of an hour Musiala is stopped by the post, a fraction after Mueller shoots but the deflection of the defense raises just above the crossing. It’s a German assault, Musiala repeats the woodwork on 21′, then the evening becomes a merry-go-round of emotions. In fact, Vargas’s doubling arrives in the 25th minute on a great German defensive mess with Neuer who sees the ball slip between his legs into the net (and then sees himself awarded an own goal by Fifa, a total insult). At this point it would be Japan first, Costa Rica second, Spain and Germany out. He puts Havertz back in place, who finds himself in the center of the area the rebound for the 2-2 good to readmit the Iberian national team to Qatar. Germany, on the other hand, would need to score another six goals: Havertz does it again 5′ from the end, another Fuellkrug 1′ away, but many miss the center forward and Mueller himself. Costa Rica doesn’t have the strength to win back the World Cup, Germany doesn’t even seem to believe it despite 10′ of added time. She ends up caught in the twists and turns of fate that never see her qualify. And he says goodbye to Qatar. 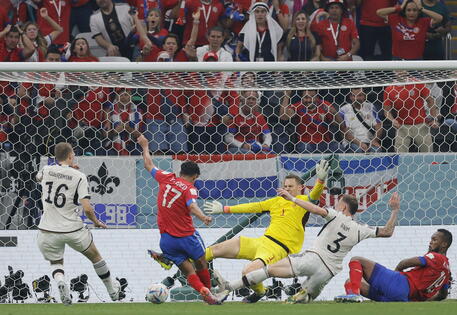 ANOTHER COMPANY FROM JAPAN, BEAT SPAIN 2-1 AND WON THE GROUP

One point was enough for Spain to secure qualification for the round of 16 of Qatar 2022 but Luis Enrique’s national team, strong with a 7-0 win over Costa Rica in their debut, could afford to lose their last match, 2-1 against Japan, and go ahead in the tournament anyway. All to the detriment of Germany, equally second in terms of points (4) but condemned by the lower prolificacy despite the 4-2 inflicted on the Central Americans. The second place also allows the Iberians to avoid the dangerous Croatia, second in group F, who will face the Japanese, and instead find a less formidable Morocco on paper. The ups and downs of results between the Khalifa International in Doha and Al Bayt in Al Khor however made the Red Furies tremble, when with Japan already ahead 2-1 Costa Rica found themselves ahead of Germany and therefore qualified against typical of the 2010 world champions.

It was therefore the Japanese who made it to the knockout stage in full swing, capable of beating, with the same strategy, first Germany and then Spain, making the defeat against Costa Rica irrelevant, in the match that seemed easier. In both cases, Moriyasu’s team managed to close the first half with a minimal disadvantage and then turn the situation around in the second half. A script that yielded two prestigious victories and that Japan will now try to reproduce with another great European team, the one led by Modric.

For the last match in the group, Luis Enrique has decided to focus on Morata as starter instead of Marco Asensio and the former Juventus striker immediately (11′) returned the trust by scoring his third goal in the tournament after those scored in Costa Rica and Germany, when instead he had entered the tender in progress. The coach introduced full-back Balde and deployed Williams as a winger, while two changes involved Azpilicueta for Carvajal and Pau Torres for Laporte. Five changes in Japan since the defeat against Costa Rica: forwards Ito, Maeda and Kubo, and midfielder Tanaka return as starters. Absent director Endo, Taniguchi replaced Yamane in defense.

Spain started with the usual quick and enveloping maneuver with Japan lined up rather high and ready to react. Morata’s header, following a precise cross from Azpilicueta, seemed to have steered the match and in fact the European team continued to lead the game, risking little or nothing from Unai Simon’s side. However, when it came to closing on the net, the Red Furies didn’t find the right starting point, with a clear disparity between balls played and chances had.

However, nothing hinted at what would happen in the second half, when Japan showed up on the pitch with the attitude they had in the match against Germany, crowned by an unexpected comeback. Coach Moriyasu put Doan on the field in place of Kubo and as he had done with the Germans, the Freiburg forward only took 3′ to equalise, with a shot from just outside the box that surprised a not faultless Simon.

Spain didn’t react right away, making a mistake, because the Japanese pushed again on the accelerator and doubled through Tanaka, who deflected an assist from Mitoma from two steps away. At first the goal was not validated because the ball seemed to have gone out on the back, but the Var ascertained its regularity.

The Japan-Germany script was thus repeated, with Spain a little stunned despite the many substitutions by Luis Enrique and the Japanese, aggressive on every ball, which prevented their opponents from organizing an effective reaction, so much so that Gonda risked very little , if not in the last few minutes, by which time it was too late to turn the tables. The treasure trove of goals protected the Spaniards, but finding a bit of malice will be useful against a Morocco that doesn’t seem to want to give anyone discounts. 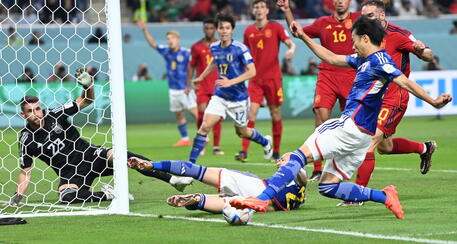 David Martin is the lead editor for Spark Chronicles. David has been working as a freelance journalist.
Previous After 20 years, Dakota Fanning and Denzel Washington together in The Equalizer 3
Next The Crown 5: Netflix series review