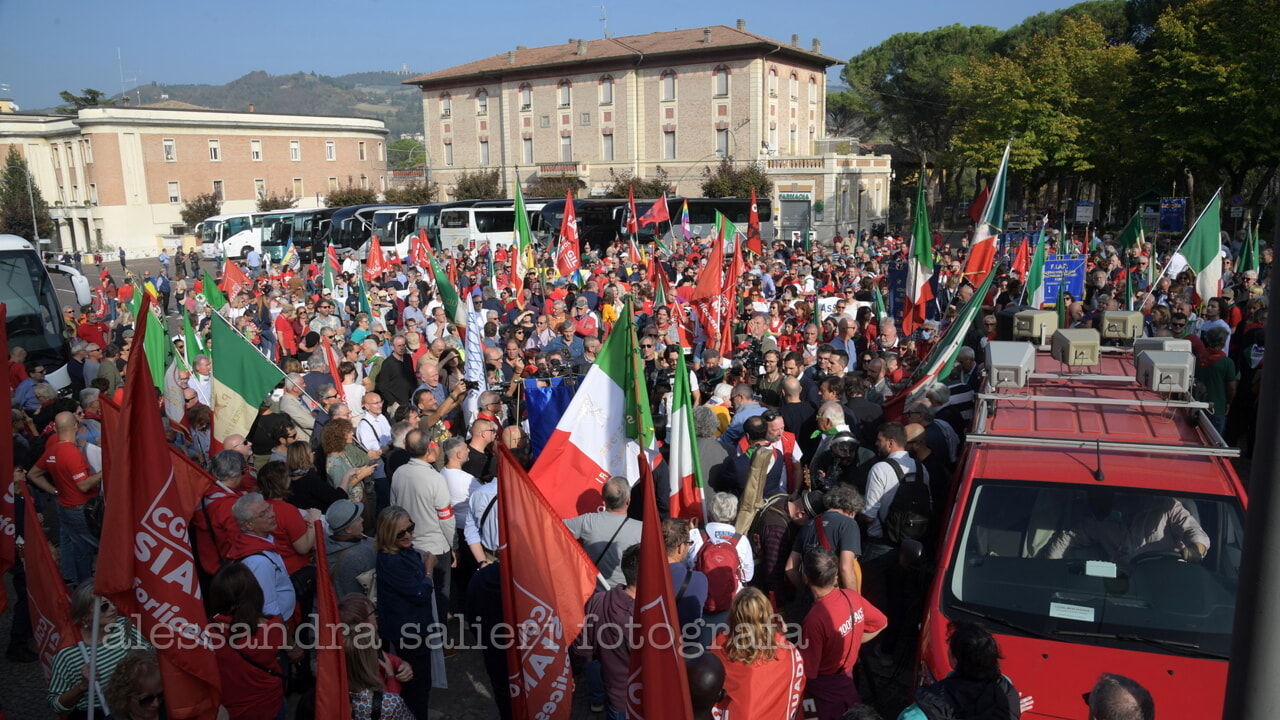 A thousand in procession to Mussolini’s birthplace, a century after the March on Rome: “We, different from the fascists”

There were Nara Lotti, 94, Giovanni Nanni and then Ugo da Piacenza and Vittorio da Imola. They were present among the audience who marched through the streets of Predappio. And even if well over the years, this small group of partisans that the Resistance saw directly with their eyes and made with their actions, did not want to miss the symbolic appointment of Predappio, in exactly a century away from the March on Rome, the historical event that marked the beginning of the fascist dictatorship in Italy. It is here that the Anpi (the national partisans association) organized a procession on Friday afternoon that had its epilogue in Piazza Garibaldi, under the windows of the birthplace of Benito Mussolini, which has long since been transformed by the Municipality into a place for exhibitions and of culture.

The procession for the liberation of Predappio

Approximately a thousand people came mostly from Emilia-Romagna, but also from further afield such as Milan and Ancona. There were 12 coaches of the participants. The official occasion of the demonstration was the Liberation of the country, which took place on October 28, 1944 at the hands of the VIII Garibaldi partisans and the Polish soldiers, a date that is also symbolic: even if there are no official testimonies that attest to it, in fact , for the entry of the allies in the birthplace of the Duce, the same date was chosen that just 22 years earlier marked his rise to power. So much so that the expulsion of the Germans from Predappio was also prominent in foreign newspapers at the time. A symbolism of Predappio that has lasted for a century now.

Failure to sponsor the Municipality

The event did not have the patronage of the Municipality of Predappio, led by the center-right mayor Roberto Canali officially for traffic reasons, as the main road through the town, Viale Matteotti, was closed from 2.30 pm to about 4 pm. , but traffic problems were scarce, also because once the demonstrators gathered in the hemicycle of Piazza Garibaldi, the one that opens up to the climb to Mussolini’s birthplace, the road was reopened.

The Anpi: “We will never mediate on our diversity from the fascists”

The Anpi, in the final speech by the member of the national secretariat Vincenzo Calò, then reaffirmed its principles and claimed its relevance: “We are the only real defense for the protection of democracy and the Constitution in this country”, because “there is still a fascist culture”. Then he lashes out against what he considers a “linguistic metamorphosis to change reality” with the use of ‘nation’ instead of ‘country’ and the term ‘patriots’ by the leader of the Brothers of Italy Giorgia Meloni. He therefore claims the difference “between those who fought for the values ​​of the Constitution and those who for other values, are not the same thing, it is the only difference on which we will never mediate, beyond any trivialization of fascism”. Then, veering on topicality, there are a series of no: no to presidentialism, no to the differentiated autonomy of the Regions and no to the war in Ukraine.

Whistles to the mayor: “A missed opportunity to remove ambiguity”

Departed from under the Municipality, at the address of which some whistles started when the president of the Province Enzo Lattuca he beat the mayor’s absence (“A missed opportunity, we don’t need these ambiguities”, he said), the procession unfolded between music, readings and speeches. Numerous TVs present, including foreign ones. There was no lack of controversy against the new premier Giorgia Meloni. “If he is on that seat today it is for democracy that the partisans have conquered”, he thunders Ivan Pedretti, secretary of the Spi-Cgil pensioners’ union. “The Resistance gave us freedom”, again Pedretti who then invited a closed fist and recalled how the beginning of fascism was marked by the attack by squadrists on the Chambers of Labor. “The same attack of those who attacked the headquarters of the national CGIL last year, but we will respond blow by blow, because democracy must be defended”, again Pedretti.

Moments of tension, then, when the procession paraded in front of the fascist gadget shop ‘Predappio Tricolore’, which was voluntarily closed by the owner precisely in order not to create friction. A cordon of plainclothes policemen and of the same service of order of the parade removed the protesters without any difficulty, in a demonstration however abundantly armored by police and carabinieri and without any problem of public order.

VIDEO – The images of the procession in Predappio

In Garibald squarethe Luigi Lolli, the secretary of the Anpi of Predappio (section that has 40 members) therefore dismantled the myth of a Predappio safeguarded from the atrocities of the Germans because it was the country of the Duce, recalling the Scala family who was rounded up and killed in retaliation for the death of a German soldier, as well as the shooting of two young people in their twenties. He then transmits to those present the warning bequeathed to him by his partisan father: “Woe to do, after the end of the war, what they did with their squad attacks, never circulate hatred”. To the Municipality of Predappio, therefore, the request to name a street after Giuseppe Ferlini, partisan leader of the Romagna town.

Among those present in the procession were Emma Pettitti, president of the Legislative Assembly of Emilia-Romagna; Enzo Lattuca, president of the Province of Forlì-Cesena, several mayors of the area such as Daniele Valbonesi (Santa Sofia), Elisa Deo (Galeata), Matteo Gozzoli (Cesenatico), Gessica Allegni (Bertinoro) and several others. Also present was the senator of the M5S Marco Croatti, the only member of parliament. Some former mayors also paraded, by Paolo Lucchi (Cesena), Davide Drei (Forlì) and Giorgio Frassineti (Predappio). In the procession many flags of the CGIL, but also of the Democratic Party, of the parties that refer to communism, of the Arcigay and rainbow flags of peace.

Outside the procession, but in the village, several groups of people strictly dressed in black. In fact, in view of the “nostalgic” demonstration on Sunday, the one held three times a year in Predappio (birth, death of Mussolini and March on Rome), small groups of pro-fascists have already arrived. He confirms it Francesco Minutillo, curator of the exhibition of memorabilia ‘O Roma o morte’ which is held in a restaurant at the entrance of the town: “Today there were over a hundred visitors to the exhibition, also from abroad, especially French. Partisans have not been seen. I myself did four interviews with Rai and TV in Austria, America and France ”. Many, about a kilometer from the event, meanwhile continued to access the Mussolini crypt in the San Cassiano cemetery, to pay homage to Mussolini’s tomb. The police estimate is that on Sunday at least two thousand other people nostalgic for fascism will gather in Predappio.

Videogames entered his life in the late '80s, at the time of the first meeting with Super Mario Bros, and even today they make it a permanent part, after almost 30 years. Pros and defects: he manages to finish Super Mario Bros in less than 5 minutes but he has never finished Final Fight with a credit ... he's still trying.
Previous Sampdoria, the Sheikh’s emissaries in trouble: they wanted Salernitana, reported for false surety | First page
Next The Umbrella Academy: Season 3 receives a new trailer