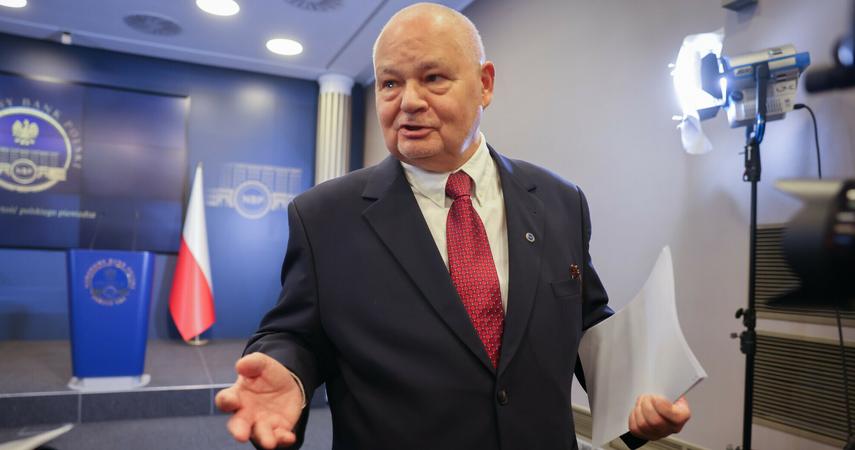 Adam Glapiński. NBP head on attacks on the central bank

“Attacks on the National Bank of Poland will continue until the law on defense of the homeland is signed by the president. There are many surprising events associated with the announcement that we can afford to modernize the Polish army. Also an unprecedented attack on the president of the NBP,” says Adam Glapiński, president of the National Bank of Poland. , in an interview for “Gazeta Bankowa”.

Let us recall: the draft law on the defense of the homeland was announced at the end of October by Deputy Prime Minister Jarosław Kaczyński and Minister of National Defense Mariusz Błaszczak. Politicians then presented plans to expand the army to 300,000. soldiers and the creation of the Armed Forces Support Fund, which is to be funded from many sources, including the profit of the National Bank of Poland.

Adam Glapiński: NBP will not allow heightened inflation to persist

Fragments of the latest interview of the head of the NBP were sent to the media by the bank’s press office on Thursday evening. Some of the quotes were also published on Twitter.

Adam Glapiński has recently given more than one interview in which he emphasized the role of the government and the central bank in protecting the Polish economy from the serious effects of the pandemic. And this time he took up this thread. “It was possible to protect the income of Poles and Polish companies, which provides the basis for the continuation of the economic development of our country in the coming years,” he said “Gazeta Bankowa”. He also assured once again that the NBP would not allow heightened inflation to persist.

“Just as we were determined to save the Polish economy during the pandemic, we will not allow the elevated inflation to persist,” said President Glapiński.

In 2020 – both at home and abroad – we faced an unprecedented shock to the economy caused by the outbreak of the pandemic. At that time, the NBP took many decisive measures very quickly to mitigate the economic effects of COVID-19 as much as possible. (…) The recession in our country was relatively shallow and short-lived, and unemployment hardly increased, making it one of the lowest in the European Union.

As a result, it was possible to quickly make up for the pandemic losses, GDP exceeded the pre-pandemic level already in the second quarter of this year, which many European countries have not yet managed to achieve. Overall, it was possible to protect the income of Poles and Polish companies, which gives grounds for the continuation of the economic development of our country in the coming years. In this way, the stability of the financial system was also supported

– says the president in an interview quoted by the NBP press office.

President Glapiński also assures that the NBP has taken “decisive action to limit inflation”. He reminds that interest rates have been raised twice and announces: “if necessary, we will continue”.

Just as we were determined to save the Polish economy during the pandemic, we will not allow heightened inflation to persist. Of course, while ensuring sustainable growth in the economy.

It should be remembered that until the first quarter of 2022, inflation will remain elevated, because – as I said – it is currently being boosted by increases in fuel and raw materials prices in the world, an explosion in gas prices in Europe, the effects of the EU climate policy affecting electricity prices and other factors. However, our actions will prevent these shocks from increasing inflation permanently. As a result, after a few quarters, it will start to decline.

See also: The head of the NBP on inflation for the Hungarian daily. He talks about “a weave of shocks of a global nature”

Glapiński also refers to the recently announced changes in the financing of the Polish army, announced by the government. “Planning transmission contributions from the NBP profit to the Armed Forces Support Fund in my opinion it is completely correct and I am very happy. The profit of the central bank is the income obtained mainly from the management of the NBP reserves, which are national assets, while national defense is one of the most important functions of the state. […] a statutory amendment will be required here […]. This amendment – if adopted – will not affect the rules for generating this profit. As before, the NBP will aim at effective management of reserves and costs, which should help to maximize the financial result, “says the president of the NBP.

And he adds that “Poland’s security is the basic condition for economic stability and prosperity”.

Adam Glapiński plans to run for a second term in the chair of the NBP president. “I will apply for a second term of office, I would like a second term and I feel properly prepared, better and better prepared” – he said at the beginning of November. It is unofficially known that his candidacy is supported by President Duda. In early November, the president awarded President Glapiński with a special Economic Award “for maintaining the stability of the banking system in the crisis caused by the pandemic.”

The variety offered by video games never ceases to amaze him. He loves OutRun's drifting as well as the contemplative walks of Dear Esther. Immersing himself in other worlds is an incomparable feeling for him: he understood it by playing for the first time in Shenmue.
Previous Italy. The obligation to wear masks outside has been restored. High penalties for breaking the warrant
Next World Cup 2022 play-off draw: What time? When is the draw?