Athletics: Jacobs gold in the 100 meters at the European Championships in Monaco – Sport

Marcell Jacobs is back. After a troubled season, the 100-meter Olympic champion wins gold at the European Athletics Championships in Munich with a time of 9.95 (+0.1), a championship record equaled, first time under ten seconds this season. The Olympic champion and European record holder enriches his gold collection at the Olympiastadion, beating the two British sprinters Zharnel Hughes (9.99) and Jeremiah Azu (10.13), despite the last few months being marked by a long chain of injuries. To recap: now he is reigning Olympic champion of 100 and 4×100, indoor world champion (in March in Belgrade), indoor European champion (Torun 2021) and now king of Europe outdoors. “Thanks for those who cheered for me. It was a complicated, difficult season – the Italian commented on Rai Sport’s microphones – Bringing the gold home is exciting and gives me confidence for the future. race, in the semifinals I seemed to have run much better “. Italy returns to the podium of the 100 at the European Championships forty years after Pierfrancesco Pavoni’s silver in Athens 1982. In the final of the 100 the other blue Chituru Ali closes in eighth place with 10.28 after having run the personal best of 10.12 in semifinal. In the women’s final, the Italian Zaynab Dosso is seventh, capable of 11.37 (+0.1) in the race that crowns the German Gina Luckenkemper (10.99). 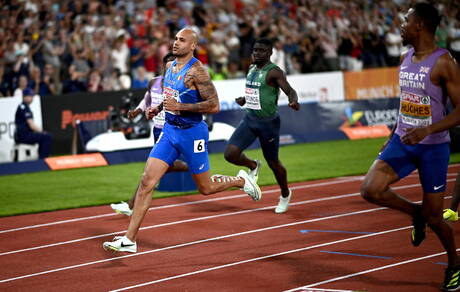 Italy is also celebrating thanks to Yeman Crippa and his bronze with a time of 13: 24.83, preceded in an exciting three-way fight on the last lap by the Norwegian world champion Jakob Ingebrigtsen (13: 21.13) and the Spanish Mohamed Katir (13: 22.98). For the Trentino delle Fiamme Oro it is the second European medal on the track after the bronze won four years ago in Berlin in the 10,000 meters, a specialty that he will face on Sunday on the final day of the European Championships to look for another podium.

Italy can also toast to the Italian primacy of Dario Dester in the decathlon: after twenty-six years the national record signed by Beniamino Poserina in Formia in 1996 falls (8169 points), under the blows of the 22-year-old Cremonese of the Carabinieri, able to total one score of 8218 points with personal bests in all throwing competitions (weight 14.56, discus 43.04, javelin 57.24) and with an extraordinary test of maturity. 2.21 is enough to hit the final of the high jump at the European Championships. The qualification did not escape Gianmarco Tamberi and Marco Fassinotti: the Olympic champion hits it after a hesitation on the first attempt at this altitude, tames only at the second test, in front of the pit of 50 thousand spectators at the Olympiastadion; the other blue instead goes directly to the target at the first assault, something that six other athletes do, including the Germans Mateusz Przybylko and Tobias Potye and the Belgian Thomas Carmoy, not the Ukrainian world bronze medalist Andriy Protsenko who imitates the same path as Tamberi : ok 2.17, then 2.21 per second. Among the illustrious eliminated are the other Ukrainian Bohdan Bondarenko (out with 2.17) and the Israeli Yonathan Kapitolnik. Also out the third of the blues, Christian Falocchi, 2.12 at the second and three spots at 2.17. Thursday evening at 20.05 is the hour of truth, six years after the continental title won by Tamberi in Amsterdam. “I was expecting these measures for qualification – comments Tamberi – In the warm-up I felt good, I made better jumps than in the race and then I put myself in ‘off’ mode to waste as little energy as possible. The mistake at 2 does not matter. 21 because I spent very little. There is a crazy atmosphere here, it was a long time since I felt this kind of warmth from the public. I’m enthusiastic. After Covid I was struggling so much and today I was fine, fingers crossed and let’s hope so. : there are many competitive jumpers worldwide, many of them are fluctuating, with races in which they do very well and others in which they do badly, and I put myself in it too. Gold? complicated to say, but I doubt you can win with less than 2.30, the Germans here at home want a good result “.

David Martin is the lead editor for Spark Chronicles. David has been working as a freelance journalist.
Previous the hottest nights put a strain on health; a study says it »ILMETEO.it
Next The video in which a very young Giorgia Meloni says that Mussolini was a good politician