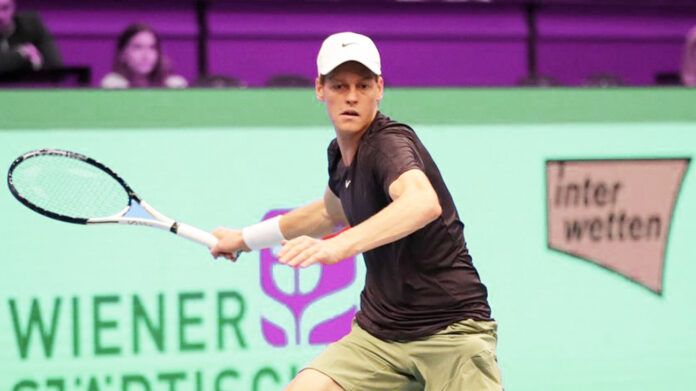 Jannik Sinner continues his run at the ATP 500 in Vienna, despite a fluctuating performance, less convincing and continuous than his debut performance in the tournament. The South Tyrolean overcomes the Argentine Francisco Cerundolo 7-5 6-3 and flies to the quarterfinals of the Austrian tournament, where a super-challenge against Daniil Medvedev awaits him. Sinner gave the whole match the feeling of being superior in the exchange and in the shots at the beginning of the game compared to the Argentine, but he wasted a break advantage in the first set in the opening, then closing 7-5 by “courtesy” of Cerundolo , stumbled upon a bad game; so he ran away in the second on the wave of the first set, but with a rather passive game he lost his serve again. It was a moment, again the Argentine gave so much and Jannik thus made the stretch towards success. A discreet Sinner, who perhaps again accused a little discomfort in his ankle (there was a grimace after a braking to the right in the first set), but above all a bit fluctuating with the blows, foul and not very continuous compared to his best versions .

He kept a decent Sinner pace, especially with the forehand in the center, but he didn’t always manage to break through because Cerundolo leaned very well with his forehand on Jannik’s fast and clean ball, finding depth in turn. Cerundolo is a tennis player who cannot keep his performance at its maximum for long, but can find remarkable flare-ups, quick with his feet to reach corners and powerful in executions, from both sides. In fact, in the two sets he found two breaks won with merit, pushing “hard” and taking the points. But he also ran into too many mistakes, and some unfortunate games at key moments. In fact, the difference in Sinner’s favor came not so much in the exchanges imposed by the blue, in the construction of the points, as in the shots at the beginning of the game and thanks to too many errors by Cerundolo.

The Argentine paid poor numbers with the second ball, he always went into crisis without the first on the pitch; on the contrary, Sinner served better and also had better percentages on the latter. With the response Jannik was superior, he found not so much winning points (as in the opening match in Vienna) as deep balls that opened the field for the next lunge. Jannik, on the other hand, in today’s performance did not convince in some tactical choices, such as risking the short ball several times, obtaining in practice only one point (and he also tried it in important moments, without success), and for some descents to the net not always rewarded, both for incorrect playing times in coming forward and for revisable performances under the net, especially with the volley of rights. In the games that split the match, Cerundolo’s demerits were more than Sinner’s great shots. 11 winners and 19 errors are a rather faithful photo of a too foul performance of the blue, uncertain even with the diagonal backhand, the shot usually pulls with your eyes closed.

Not an exciting performance, but it was enough for the victory and thus to conquer the quarter-finals. It will therefore be the fourth match against Medvedev, against whom he lost all three previous ones, the last one at the Finals in Turin 2021, in a match that became beautiful from the second set. Surely against the Russian seen today against Thiem, a much more intense and continuous Sinner will be needed.

Sinner begins the match at the bar. At zero he easily wins his first game, excellent in the serve, and he also stings in response by imposing a great pace from the center of the field. At 30-40 there is immediately a break point in favor of the blue. With an incredible double ribbon, super lucky, the BREAK arrives, 2-0 and service for Jannik. The advantage does not last long: now it is Sinner who makes a mistake (a bad attempt at damping), Cerundolo begins to take measures when pressing the blue. An error of law in the exchange at 15-40 costs Jannik the counter-break, 2-1. A few too many errors by Sinner in the corner with the backhand. 2 even. The blue finds a good service game again, and risks 3-2 in response. The game goes to the advantages, and with a blow in response, full arm with the forehand, he gets a break point. It serves Francisco well, angled and precise, cancels the chance. The Argentine is quick in reaching the ball, he has strength with the forehand and his ball is pretty heavy. 3 even. He exchanges with good speed, initially in the center and rather deep; the first to open the corner tends to take a big advantage and wins the point, it is almost always the player at bat. On 4 all, Sinner serves, leads 40-0 with great ease, then misses a couple of tactical choices and mistakes with the forehand. The game goes to the advantages. He pushes, but exaggerates with the cross and another mistake with the crossed right costs him a very delicate break point. Ace! The first of the match, there was no better time to find it. Jannik’s best point of the match arrives: he defends himself in the corner with a very fast forehand, then enters the field with an inside out backhand of a majestic backhand. But there is a struggle, Cerundolo holds up the exchange and leans very well with the right on the speed of the blue. 5-4 Sinner, now the pressure is on the Argentine. He holds it up well, including an Ace to finish at 15. 5 all. Jannik also did well, ahead 6-5. This time Cerundolo is not precise, he hastens the game, misses three setbacks in a row and collapses 0-40, three set points for Sinner! Very badly the albiceleste, from the center sparacchia with the right on the net. 7-5 Sinner. A disastrous last game ruins a good set for the Argentine, with Jannik a bit foul compared to the debut match, but Cerundolo’s ball has a high consistency.

Second set, Sinner snaps to serve. Good firsts, the forehand is accurate, 1-0 (third consecutive game). Francisco is in a bad moment, he has lost effectiveness with the first ball, hastens the game and makes a mistake. He feels all the pressure of Jannik’s deep answers – but without great risk. Collapses 0-30, chance for the blue to take advantage of the positive moment. With a double fault on 15-30 (too much risk), here are two break points for Sinner. Still nothing before in the field for the Argentine, he exchanges, Cerundolo risks a short ball but it is poorly executed. BREAK Sinner, 2-0 and fourth game in a row. Francisco does not know what to do to stop the wave of blue. He tries to throw himself forward (even with a good approach), but Jannik’s backhand pass through is splendid. After 1 hour and 5 minutes, the score is 3-0 Sinner, with another remarkable cross right at the exit from the service (fifth game in a row). Finds the first service Cerundolo, stops the bleeding returning to win a game, for the 3-1. With his back to the wall, Francisco lets out his arm in response and surprises Jannik, 0-30. Sinner risks the short ball again, but it still doesn’t work as the next net hit is wide. 0-40, when the match seemed “on ice”, here are three break points for the Argentine. With a deadly acceleration with the backhand, Cerundolo took back the BREAK. Sinner’s empty pass, he dropped his pace and was surprised by a Cerundolo who was aggressive again. But the service continues not to assist the Argentine, who immediately goes into crisis on the second. 0-30, and then 0-40, with an error with the forehand. Bravo Sinner to play solid, straight by straight, and provoke the mistakes of his rival, very uncertain with the second ball. Another trivial backhand mistake, it costs the Argentine the second consecutive zero break. 4-2 and Sinner service. It’s time to consolidate the lead and get one step closer to victory. Jannik finds a nice long backhand, then a perfect first outside at 30-15. With a central attack and then a perfect backhand volley, the blue flies 5-2. Cerundolo remains in the wake of 5-3. Sinner serves for the match, but take risks! He concedes a break point, with a bad serve and volley… but he saves himself, Francisco makes a mistake with the right. Closes at the first match point Jannik is gone. An important victory because it was obtained without playing one’s best tennis, and because it opens the doors to the quarter-finals, where he finds Daniil Medvedev. Another quality and continuity will be needed in its maximum yield.

David Martin is the lead editor for Spark Chronicles. David has been working as a freelance journalist.
Previous How much does a TV on all day consume?
Next Assago (Milan), man stabs 5 people in a shopping center