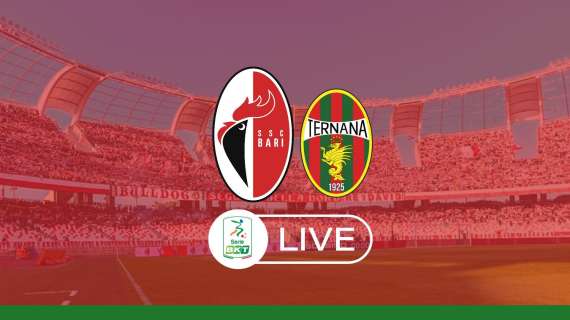 The advance between Bari and Ternana ends goalless. A challenge characterized by the absolute domination of the cockerels, however unable to realize the numerous opportunities created between bad luck and imprecision. From tomorrow the team head will be projected to the away match in Benevendo, scheduled for Saturday 5th November.

91 ‘- Caprile safely blocks an insidious idea from Donnarumma, good at freeing himself and kicking the net in the strait

83 ‘- Last change for the Umbrians: here is Donnarumma instead of Favilli

81 ‘- Ricci finds D’Errico only at the edge of the area. The former Monza gets free and shoots at the net: central shot but defective rejected by Iannarilli, which forces Mantovani to move away in a lateral foul

79 ‘- Mignani throws in Galano and Mallamo for Botta and Maita

76 & # 39; – D’Errico chokes too much the conclusion with the right after a good dribbling in the area

73 & # 39; – Double chance Bari. Before Cheddira does not find the deviation from a few steps on the developments of a corner, a few seconds after Di Cesare’s volley on D’Errico’s cross ends slightly high

69 ‘- Maita warned for a foul on Diakite

66 ‘- Physical problem for Scheidler (probably cramps) and Mignani makes two substitutions: outside the French striker and Folorunsho, inside Salcedo and D’Errico

63 & # 39; – Bari is still dangerous with a lot of field available but Scheidler kicks high from a good position

62 ‘- Cheddira devours the advantage. The attacker wins a physical confrontation with Sorensen on a deep ball and finds himself alone in front of Iannarilli, however, shooting at the Umbrian extreme defender

61 ‘- Double change in Ternana: Outside Moro and Partipilo, inside Pettinari and Falletti

60 ‘- Cross of Botta! Cheddira leans for the playmaker, who, with a safe shot from the center of the penalty area, finds the wood of Iannarilli’s goal

54 ‘- Diakite’s cue from the right, who with an acceleration burns two opponents and with a filter serves Partipilo. The former red and white is free for the conclusion with the left-handed but does not find the door

49 ‘- Lower rhythms in this second half start

46 ‘- The match resumes. A novelty for Ternana, inside Martella for Corrado

Many opportunities created by Bari in these first 45 minutes but the result is still at 0-0. To highlight the over-the-top performance of Botta and the goal canceled by the VAR to Scheidler, identified as offside on the bank of Cheddira.

47 ‘- Corner of Botta and head of Vicari, whose twist does not find the door

45 ‘- Great play by Botta, who recovers the ball on a naive Palumbo and crosses in the center for Folorunsho. The midfielder prefers to direct the ball towards Iannarilli’s goal (in comfortable grip), instead of making a bank in the middle for Scheidler or Cheddira

42 & # 39; – Bari is reviewed. Pucino focuses from the right and kicks with the left-handed, ball deflected for a corner

37 ‘- On the developments of the corner, Maiello wastes with a lopsided cross

36 ‘- Stubborn action, which earns a corner in the middle on the pressure of three opponents

35 ‘- Yellow also for Di Tacchio, protagonist of a crash against Cheddira

33 ‘- Maiello is booked after a foul on Cassata

29 ‘- Very occasional for Scheidler, very good at defending the ball on Mantovani at the edge of the area, then turning around and kicking for the net. However, the return of the defender was decisive, who saved his team with a slip

26 & # 39; – Bari protests for a foul intervention by Sorensen on Ricci in the area. Previously Scheidler had missed the impact on a nice cross from Cheddira

22 ‘- No network. The VAR recognizes the irregular position of the French attacker on the bank of Cheddira

20 ‘- SCHEIDLER, BARI FORWARD. Great play by Botta, who jumps with a Partipilo tunnel and crosses in the center. Sorensen anticipates Scheidler but Cheddira bursts into the loose ball, providing a comfortable assist to his partner, quick to bag from a few steps

7 ‘- Folorunsho’s cross-shot, dampened for a corner by Diakite

13 ‘- Hard intervention by Ricci on Partipilo. The referee calls him back but does not draw the yellow

11 ‘- First corner of the match in favor of Ternana, following a conclusion by Palumbo deflected by a red and white player

9 ‘- The cockerels are definitely better in this start, especially in the possession phase

6 ‘- The red and white in the left lane very well. This time a nice combination between Folorunsho and Botta, whose shot ends on the side

4 ‘- Clamorous double opportunity wasted by Bari. Nice triangle on the center-left between Botta and Cheddira, which brings the attacking midfielder to a close conclusion. Iannarilli rejects with his feet, on the rebound Cheddira from the center of the area he shoots high

2 ‘- Immediately Scheidler dangerous. The attacker turns well on the edge of the area and kicks with his right: Iannarilli blocks in two halves

1 ‘- The match begins, possession for the guests

Good afternoon from the editorial staff of TuttoBari.com and welcome to the direct text of Bari-Ternana, race valid for the eleventh day of the Serie B 2022/23. Galletti looking for points to overcome the negative moment characterized by three defeats in a row between the championship and the Italian Cup.

David Martin is the lead editor for Spark Chronicles. David has been working as a freelance journalist.
Previous Alexandra Daddario talks about how she and her boyfriend Andrew went through “difficult times” together.
Next Usa: from mine to stadium to be with son, photo is viral – North America