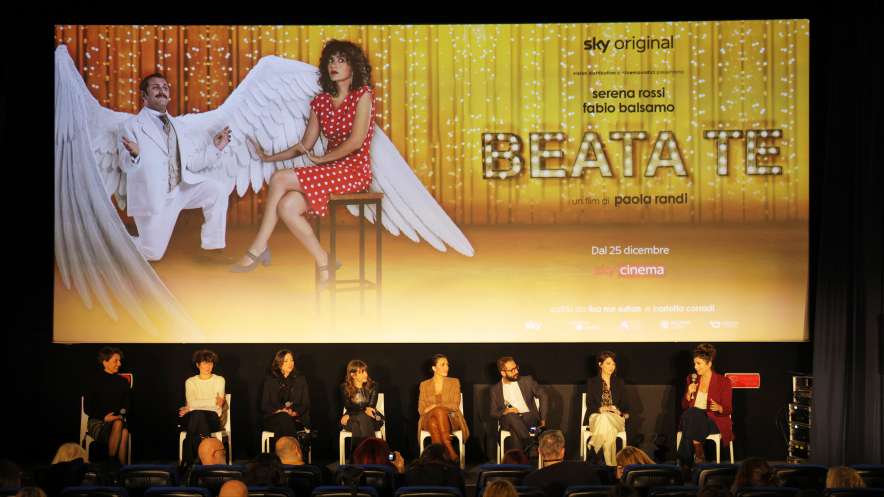 Beata Te with record-breaking Serena Rossi, the most watched film on Sky in the seven days in 2022

The title that debuted on Christmas day on Sky deals with the delicate theme of motherhood and free choice in light but not trivial tones. The film, produced for Sky by Cinema eleven and Vision Distributionis produced from Olivia Musinithe script is by Lisa Nur Sultan and Charlotte Corradi and is taken from the play “Farsi Fuori” by Luisa Merloni. Also in the cast Paola Tiziana Cruciani, Gianni Ferreri, Valentina Correani, Elisa Di Eusanio, Corrado Fortuna, Emiliano Masala, Alessandro Riceci and with the baby Catherine Bernardi.

SYNOPSIS – Marta (Serena Rossi) is a theater director, single and overall satisfied with her life, one step away from the debut of her Hamlet. On her 40th birthday, she receives an unexpected visit: the Archangel Gabriel (Fabio Balsamo), who would like to announce the birth of a son. But she Marta is not sure she wants a child “as a gift” and she asks for time to think about it. Taken aback by this request, forced to stay on Earth longer than expected, Gabriele will move into her house and stay with her for the two weeks that Marta will need to understand what she wants for herself and to be happy.

BEATA TE is a Sky Original film, available exclusively on demand on Sky and streaming only on NOW

Even at Christmas, Sky brings cinema to your home. This is the promise of new Sky Cinema campaign, scheduled from today, Tuesday 22 November 2022. With Sky Cinema you can enjoy over 200 first visions a yearwith the best of Italian and international cinema and a vast range of genres, plus Sky Cinema subscribers can join a dedicated offer to access the entire catalog of Paramount+ at no extra cost on your subscription. And in the most magical time of the year the programming will be richer than ever.

Sky will propose in the first tv JURASSIC WORLD – THE DOMINATIONepic conclusion to the Jurassic film series, Sunday 1 January at 21.15 on Sky Cinema Uno and Sky Cinema 4K (and at the same time the extended version will be on Sky Cinema Jurassic World), streaming on NOW and available on demand, also in 4K quality. The record-grossing film, directed by Colin Trevorrowwhich sees the return of the protagonists of Jurassic Park Sam Neill, Laura Dern and Jeff Goldblum they will join Chris Pratt and Bryce Dallas Howard of the Jurassic World trilogy. Also in the cast is the return of BD Wong and Omar Sy and the new entries of Dewanda Wise and Mamoudou Athie. The film is also part of the programming of the SKY CINEMA JURASSIC WORLD channel (channel 303) that, on the occasion of this long-awaited premiere, from Sunday 1st to Sunday 8th January will play all six films in the Jurassic franchise. Particularly, JURASSIC WORLD – DOMINATION on the dedicated channel it will also be available in extended version, Sunday 1 January at 21.15.

David Martin is the lead editor for Spark Chronicles. David has been working as a freelance journalist.
Previous Films to watch on TV from 4 to 10 April: plots and trailers
Next https://gamingbeasts.com/slaves-sword-2-pc-game-download/