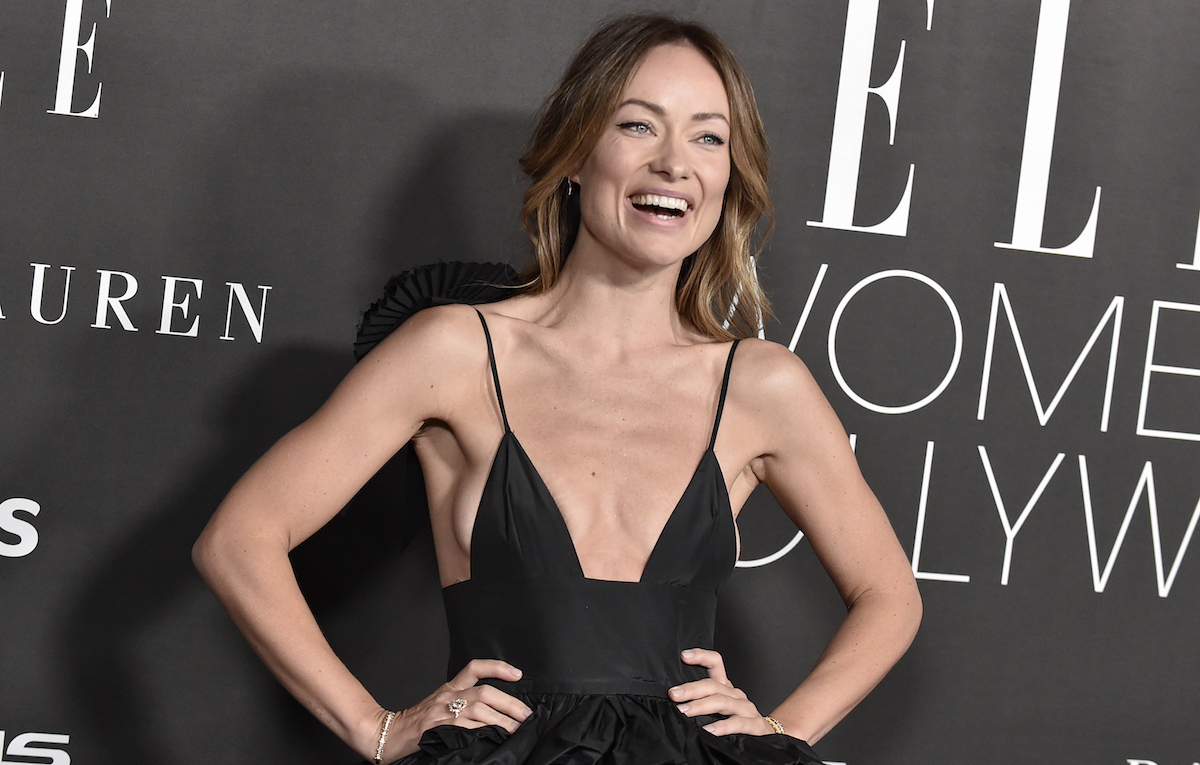 At this point, it is now undeniable: if in recent months you have not read somewhere the name of Olivia Wilde, the only possible explanation is that your internet connection has failed. Because even being among those who shun gossip in all places and in all lakes, what has revolved (and is still rotating at maximum speed) around the figure of Olivia Wilde – the director of the talked about Don’t Worry Darling, as well as Harry Styles’ current girlfriend – is such an absurd set of events that it attracts the algorithm of any social profile at least once, almost as if it were a black hole. Q&A of things maybe true, maybe not, however recorded; declarations of obvious disagreements (with a spritz flavor) and hypothesized (complete with alleged spitting on Chris Pine’s shoes); testimonies of the abandonments of the husband, the children and even the dog. And so as not to miss anything, even sharing the recipe for that delicious sauce on Instagram on a salad that is a sign of love, even when it turns into a bone of contention.

All right, we’ve been navigating the troubled waters of Olivia Wilde’s private and professional affairs for some time now, but if we want to go back to the source, the only way is to call him back: Shia LaBeouf. Or rather, the question and answer that is triggered last August between the former Hollywood enfant prodige and the director of Don’t Worry Darling, thanks to the statements that Wilde releases regarding the dismissal of LaBeouf. Thus, in the cover story of variety, Olivia says: «Her method was not in line with the ethics I demand in my productions. He has a process that, in some ways, seems to require a fighting energy, and personally I don’t think it leads to the best performance ». While in the reply email (always for the attention of variety), Shia replies: «I’m a bit confused by the story according to which I would have been fired. You and I know the reasons for my abandonment. I left your film because we couldn’t find time to rehearse together with the other actors». And while he attaches a video message in which the director begs him to stay on set because she feels “not ready to give up on the project”, she later goes to the Late Show with Stephen Colbert, arguing that those words dated back to an early stage. When the actor had not yet “given an ultimatum between him or Florence”, and the director had not yet chosen Florence, finally saying she was “really happy to have done it”.

The Cold War with Florence Pugh

Listening to Olivia Wilde’s statements in Colbert’s television living room, one thing would seem more than evident: the esteem for the protagonist of the film Florence Pugh. In reality, the smell of burning can be felt for a kilometer, because by then the cold war chatter between the two has been on fire for a long time. Take that striking «Miss Flo» with which Wilde refers to the actress in the offending video message from LaBeouf; oi rumor about Pugh’s jitters about the director’s constant romantic disappearances with Styles during filming, about which Vultures bet and that People, the next day, denies (giving voice to forty members of the crew). Or again, the great slalom that Pugh makes during the interviews to avoid comments on the spicy scenes of the film, for someone a sign of hyper-sexualization that the protagonist didn’t like; or finally, at the end, the probable annoying attitudes of LaBeouf, on which Wilde initially tries to put a patch, without worrying about the safety of «Miss Flo». In short, in the Wilde-Pugh war every battle is a maybe, a maybe, a who knows. But then comes Venice. Florence, when it’s time for the press conference, disappears to go for an aperitif. She then makes her entrance on the red carpet but keeps her distance from the cast, and she attends the screening of the film without practically exchanging glances with the director. And so it was that the missiles deployed on Cuba became a spritz in Pugh’s hands.

If they were to ask me, in a nutshell, a comment about all the gossip behind it Don’t Worry DarlingI would answer something like, “Shia LaBeouf and Florence Pugh are for boys; Spit-gate is for men». In other words: what do we care about all these stories of layoffs and storms inside and outside the set, when a video shot in the hall of the Venice Film Festival shortly before the screening of the film seems to incriminate an elegant Harry Styles, who releases a contemptuous spittle on the shoes of colleague Chris Pine? Other than conjectures about it (did it really happen? But above all: was it intentional?): to solve the mystery it would take Sherlock Holmes. Days of fire follow, with bets in the worst bars in Caracas and debts to flesh out the ranks of the players of Squid Game. Meanwhile, Wilde denies everything, Harry jokes during one of his concerts in New York (“I made a quick trip to Venice to spit on Chris Pine and I’m back”), and a representative of Chris Pine closes the matter with a message that reads: “To be clear: Harry Styles did NOT spit on Chris Pine.” Perhaps, but I’m sure that now there are those who hear the little devil on their left shoulder whispering: «Then why didn’t he say it?».

Arrived in October, the Venice Film Festival is concluded, the Spitgate archived, and Don’t Worry Darling it brought home critics’ grimaces, but also excellent box office receipts. And now good night, children, that was the story of Olivia Wilde. But no, I’m joking, the fun comes now, when (a few days ago) the antagonist par excellence appears: the nanny. Showing himself as a profile shadow to the cameras of the Daily Mailthe former nanny of Olivia and Jason Sudeikis’ children portray Wilde as a liar. Other than “when I met Harry Styles, the story with Jason Sudeikis was over for a long time” (semi-cit.): how is it possible, the nanny points out, that in September 2020 Olivia proudly showed the engagement ring on a beach in Malibu and already on November 8 (ie a month after meeting Styles) the two now ex declare the end of their relationship? Not only that: the nanny also talks about how Wilde’s therapist defined her attachment to her lover (spoiler: an addiction); how Sudeikis himself considers Wilde-professional (another spoiler: a mediocre actress and director); of how she herself, as a former employee, sees the relationship with the singer and actor (last spoiler: a way to put herself in the spotlight, taking advantage of his fame). In all of this, Olivia Wilde and Jason Sudeikis have done the only thing they could do: soundly deny everything that the nanny he said not only now, but for eighteen months now.

The salad of discord

But the most incredible story told by the ex nanny is certainly the one that sees a single episode at the center, dated November 13th. That is: when by now Olivia Wilde had taken a shack and puppets, and left her husband (and children) to be with Harry Styles. Legend has it that Olivia returned home that day, because apparently she needed her own kitchen to make her own culinary specialty: salad with a “special” dressing. Just the one she always made to Jason, which he loved so much (oh, how!) and which was, apparently, their love dish. Except that now love has passed from Jason to Harry, therefore we also have to pass the salad, the preparation of which (for another man) that day plunges Sudeikis into the darkest despair, who watches Wilde leave the house not only with its salad with a precious dressing, but also with an equally precious tupperware that will never return. The unfortunate story ends with two still images: first that of Sudeikis who lies down in front of the wheels of the car to prevent Wilde from running to Styles; then that of the recipe for the mysterious special sauce, shared without ifs or buts by the adulterous chef, in a story on her Instagram profile.

Poor Jason Sudeikis: listening to the nanny’s stories, the impression is that he was really abandoned like a dog. Too bad that, in all this, an abandoned dog seems to already exist, and it is that sweet half-breed named Gordon (for the aficionados: Gordy) that Wilde had adopted when he was two months old and who now, after so much love, has ended up being redirected not so much to the kennel, but to the dog sitter. Whose fault is it? For the nanny, it always ends up there: Styles, and that bastard Olivia Wilde. This time, however, the Maeday Rescue of Los Angeles arrived directly to save the horrible appearances, which with a post on Instagram reported how the Wilde who adopted him in their structure in 2018 today loves traveling and being with children; while Gordy, the sweet, tender little dog Gordy, for some time now, coincidentally, hasn’t. Absolutely not.

David Martin is the lead editor for Spark Chronicles. David has been working as a freelance journalist.
Previous Days of summer, the Italian trailer of the film with Gemma Arterton
Next Golden Globes 2023 winning films and actors