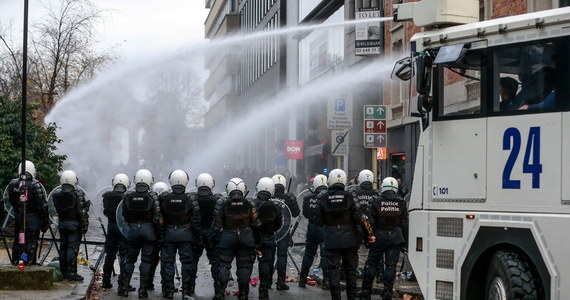 Belgium: Thousands of people at protests in Brussels against anti-covid restrictions

According to the police, about 35,000 people took part in the initially peaceful protest. people. As witnesses reported, the protest turned into clashes with officers when some of the demonstrators began to go home.

The police with a water cannon launched an attack at a crossroads in the central part of the city, in front of the building where the European Commission is located.

Faced with the line of policemen advancing towards them, the protesters joined hands shouting “Freedom!”. One of the demonstrators carried a cardboard that read, “When tyranny becomes law, rebellion becomes a duty.” The anti-fascist song “Bella Ciao” was also sung.

According to official information, three policemen and one of the protesters were injured. 42 people were detained, two of whom were arrested on suspicion of participating in riots.

The Belgian government tightened anti-covid restrictions last Wednesday, extending the obligation to wear masks and work remotely in the face of the ever-increasing number of infections.

Videogames entered his life in the late '80s, at the time of the first meeting with Super Mario Bros, and even today they make it a permanent part, after almost 30 years. Pros and defects: he manages to finish Super Mario Bros in less than 5 minutes but he has never finished Final Fight with a credit ... he's still trying.
Previous Sousa admitted having made a mistake in the match against Hungary. “If I could turn back time” Polish national team
Next China is the largest non-EU recipient of Polish dairy products