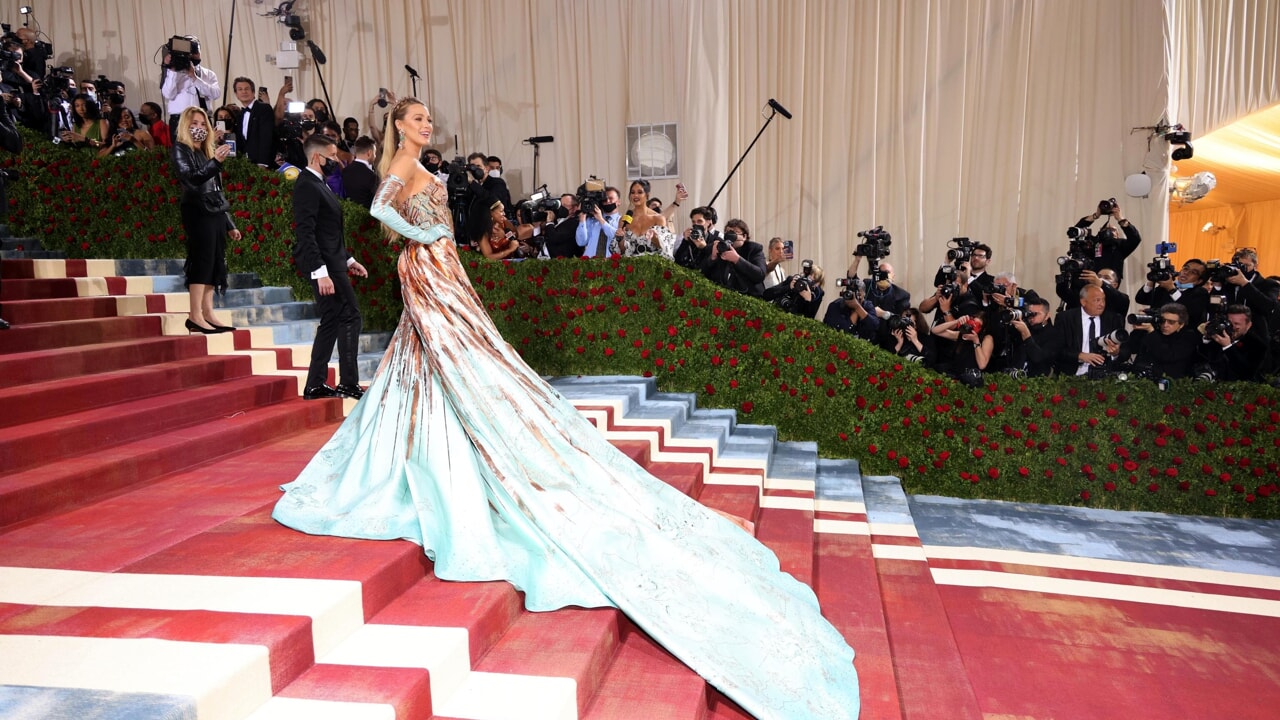 “Good morning Upper East Siders. This is Gossip Girl speaking to you, your one source of information on the scandalous lives of Manhattan’s elite. The Top Story on my home page? Serena Van Der Woodsen, number one, everyone’s favorite, has just returned after a long and mysterious absence. We missed you, S!”

Many will have come to mind this joke from Gossip Girl with the iconic scene at the Manhattan station while admiring Blake Lively’s look at the Met Gala 2022.

The actress never disappoints with her appearances at what has been dubbed the “Super Bowl of fashion,” where she held a privileged position this year, co-hosting the event with husband, Ryan Reynolds.

If Serena Van Der Woodsen lived in New York high society in the 2000s of the 21st century, the dress code del gala takes us back to the end of the 19th century. This is the theme chosen for the Met Gala in conjunction with the exhibition that opens these days at the Met Museum, “In America: An Anthology of Fashion”, an exhibition that traces American fashion from 1776 to 1973.

Many stars who have walked the red carpet, from Chiara Ferragni in the company of Fedez to Kim Kardashian. Blake Lively was one of the stars of the past editions of the gala, but unexpectedly this time too she managed to conquer the public with a breathtaking look.

The Versace dress and that detail that winks at Gossip Girl

The actress arrived arm in arm with her husband wearing an Atelier Versace dress, a convertible haute couture creation. As a basis a stylish dress bustier with crystal embroidery, metallic leather and sequins, with an oversized copper bow complete with matching gloves.

However, Lively surprised the fans by putting in place a real performance: by undoing the bow, it was transformed into a turquoise duchesse overskirt with splashes of tricolor blades. A metamorphosis that intends to reflect the transformation of the Statue of Liberty from the initial bronze color to the current green tone due to the oxidation process.

And the train of the dress held a particular detail that has not escaped the fans of Gossip Girl: in fact, it illustrates a celestial map inspired by the twelve zodiacal constellations on the ceiling of Grand Central Station in New York. Fans of the teen drama in raptures on social media have in fact recalled how the station is deeply linked to the character of Serena by recalling the very famous first scene of Gossip Girlin which the it girl played by Blake Lively makes her first appearance right at Grand Central. To brighten up the look Blake chose a Lorraine Schwartz tiara and earrings. Here is the definitive tribute to the city that brought happiness and notoriety to the Californian actress.

David Martin is the lead editor for Spark Chronicles. David has been working as a freelance journalist.
Previous Isabella, the 29-year-old daughter of Tom Cruise and Nicole Kidman “lives in a spartan house with reptiles. She is also a Scientology auditor”
Next what it is and how to cure the disease from which Elle Fanning also suffers | Vanity Fair Italy