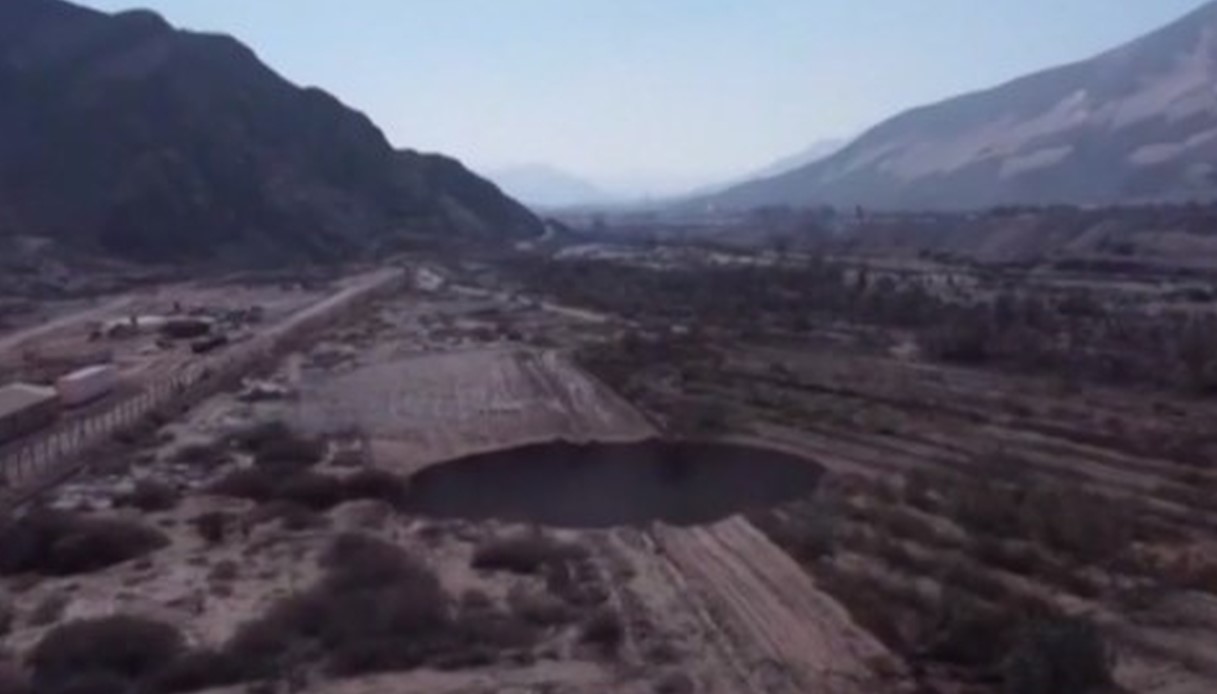 Chile, a huge chasm suddenly opened in the desert. Mystery about the causes

A gigantic chasm has opened in Chile, near an underground copper mine. The hole is growing in size, the causes are being investigated


Mystery in Chile: one gigantic chasm opened at the weekend in the desert in the Atacama region, in the area where there is one underground copper mine. The chasm, which has a circular shape, has a diameter of 32 meters. Technical investigations and analyzes are being carried out to understand how it formed.

The huge chasm in Chile: how big it is

The gigantic chasm opened on the afternoon of Saturday 30 July near the underground copper mine of Alcaparrosa, in the municipality of Tierra Amarillaabout 660 kilometers north of the capital Santiago.

The huge hole in the earth is of round shape and has a surface diameter of 25 meters. In the last few hours, however, the mayor of Tierra Amarilla Cristobal Zuniga affirmed that the chasm it is increasing in sizeand that landslides can be heard nearby.

Compared to the initial 25 meters, the diameter of the hole has grown up to 32 meters. According to experts, the chasm would also be much larger at the base, where it would measure 48 meters in diameter.

A depth of around 200 meters was initially estimated, but subsequent measurements by experts from the Chilean National Geology and Mining Service (Sernageomin) have greatly reduced this measurement. The chasm it is 64 meters deep.

Gigantic chasm in Chile: the causes are investigated

At the moment the causes are not yet known which led to the formation of the gigantic chasm. Experts are hard at work trying to determine the origin of the event.

Technical investigations and analyzes are underway to understand the exact origins of the chasm and to understand in particular whether its formation is due to some extent to mining activity mining.

There copper mine di Alcaparrosa is managed by the Canadian company Lundin Mining and is part of the Candelaria mining complex, which according to data from the Chilean government produces more than 118 thousand tons of copper every year.

In a statement, the company announced that no materials were found at the bottom of the chasm, but only a lot of water. And he announced that he has temporarily blocked all mining activities.

A chasm opens in the pool, a 32-year-old dies sucked into the water during a party in Israel: the video

The incident took place in a village in the Israeli hinterland during a company party, seriously injuring another man

Chasm in Chile, the mayor blames the mine

Fortunately in the opening of the chasm no people or infrastructure were involved. The huge hole is several hundred meters from the first houses, and the inhabitants of the area fear that the terrain in the area has become dangerous and that other chasms may open up.

The mayor of Tierra AmarillaCristobal Zuniga, asked the national authorities to shed full light on the causes of the mysterious phenomenon and to clarify that there are no risks for the population of the area.

The mayor directly accuses the mine: “This – he wrote on social media – is responsibility of the minethe use of uncontrolled groundwater, the strong explosions that destroy the soil and our homes have generated this risk and we must be sure as common that this does not happen again in another place ”.

Videogames entered his life in the late '80s, at the time of the first meeting with Super Mario Bros, and even today they make it a permanent part, after almost 30 years. Pros and defects: he manages to finish Super Mario Bros in less than 5 minutes but he has never finished Final Fight with a credit ... he's still trying.
Previous Transfer market Inter, new meeting for Pinamonti: the latest
Next Elana Dara, composer of Luísa Sonza’s ‘Cachorrinhas’, vents after hitar single: “I was innocent” – Quem