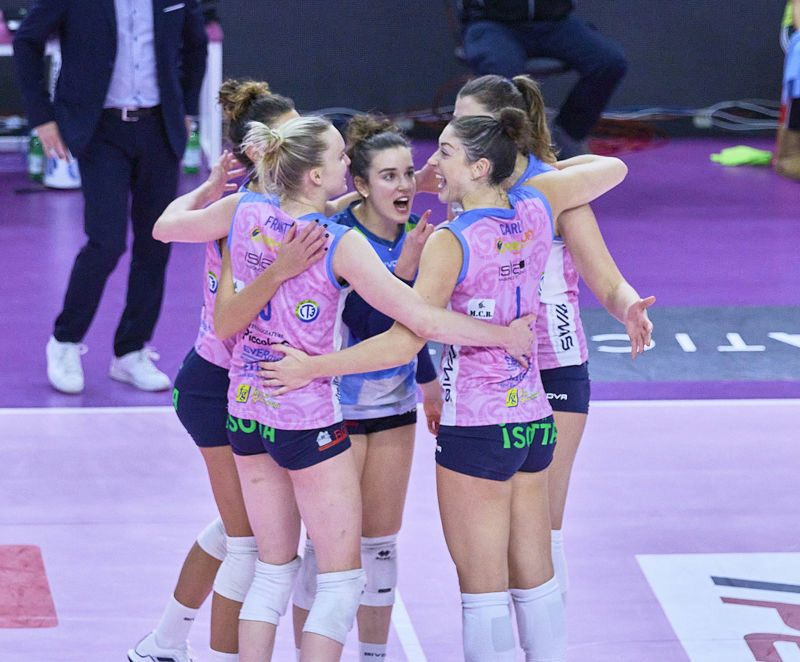 CREMONA. Beautiful choral performance by a Vbc Trasporti Pesanti Casalmaggiore who manages to overturn the inertia of the match, after winning the first set and finishing two sets down, finishing with the victory in the fifth set. For the pink captain Dimitrova 24 points, followed by Frantti with 19, elected MVP of the match. For the pink centre-backs, 8 total blocks, with Lohuis finishing with 15 points including 3 blocks and Melandri with 11 including 5 blocks. 4 aces for Lauren Carlini and many extreme saves by De Bortoli who ends with 90% of positive rice and 71% of perfect.

First set. It begins with a block by Lohuis on Omoruyi, Montibeller equalizes the score 1-1, Lohuis again then scores a point, this time in fast, 2-1 Vbc. The visitors took the lead, but captain Dimitrova took advantage of the block and shortened 3-4, Frantti then, careful under the net, evened the score. It is played point to point, great blow by Dimitrova on the bustocco wall, 7-6 Vbc. The butterflies’ goal error gives the squad 8-7, Zakchaiou’s first half is then out, 9-7, captain Dimitrova brings Casalmaggiore into double figures and coach Musso calls the first time out of the match, 10-7 Casalmaggiore. Perinelli hits the away wall and scores 11-8. Captain Dimitrova’s impregnable diagonal that leaves the host defense motionless, 12-9. Lohuis’s ball confuses the host defense and the Dutchman thus finds the 13-11. Great soft ball from the pink captain who makes it 15-12, Frantti then extends with a touch out, 16-12 Casalmaggiore, time out Busto. Back on the field and Frantti’s diagonal dictates the law, 17-12, the American then extends again. Frantti unties his arm and Degradi’s defense ends up in the squad field, 19-14. Montibeller tries but Melandri makes a shadow, block and 20-15. Again Melandri, this time in the first half, makes 21-16, Frantti’s pipe then extends 22-16. Zakchaiou brings him up 18-22 with a powerful first half and coach Pistola prefers to call his first time out. Perinelli is attentive under the net and takes advantage of the bad defense of the guests on Dimitrova, set point 24-19. On 24-21 Vbc, coach Pistola calls time out. Upon returning to the field, Battista’s joke is out and closes 25-21. Top scorer: Frantti 6, Montibeller 7

Second set. Omoruyi opens the second half in parallel, Olivotto extends 2-0, Zakchaiou sends his serve to the net, 1-2. Melandri lands his first half and makes it 2-3. Dimitrova squares his diagonal and hits the back of Lloyd first and then Omoruyi, 3-4. Lohuis’ fast isn’t powerful but it’s effective, 4-6. It’s still the fast of Lohuis to end up on the ground, 5-7. Diagonally Frantti finds the touch and scores 6-8. The guests start to push and the landlords seem a bit tarnished, time out for coach Pistola, 11-7 Bust. On 14-7 Piva enters for Perinelli. Busto makes it 15-7 and coach Pistola is forced into another time out. At 16-7 Busto enters Malual for Dimitrova, Melandri lands his first half, 8-16. Lohuis’ first half is also effective, 9-17. Piva finds a nice passerby and signs the 10-18. Malual passes between the hands of the blocker and finds the 12-20. Frantti signs the 13-21, and then shortens again in the pipe, 14-21 time out Busto. On the return to the field the fourth touch to the butterflies is whistled, 15-21, Piva in a run-up makes 16-21 with a diagonal. Authentic hole on the ground by Malual who goes very high and makes 17-22, Lohuis shortens in the first half. Another hole in the ground by Malual who seems to be taking the lift, 19-23. Montibeller closes 25-19. Top scorer: Lohuis and Malual 4, Lloyd 6

Third set. Frantti opens the ball, Busto equalizes with Omoruyi, who extends again, 2-1 Busto, then Lohuis takes care of balancing the score. Captain Dimitrova hits full arm and carries on his 3-2. Montibeller brings him to 7-4, time out Casalmaggiore. He returns to the field and Dimitrova places his hands out, 5-7, Melandri then shortens. Frantti finds the touch of the guest block and makes 7-8, captain Dimitrova equalizes the accounts 8-8. Powerful hands out by Dimitrova who finds the 11-13. Cunning touch by Carlini who scores 12-14 in second. Melandri’s monster block on Montibeller and it goes up to 13-14, Lohuis’s ace equalizes 14-14, Busto time out. Perinelli turns into a setter and cues Frantti well who scores 15-16 diagonally, Carlini’s ace equalizes, Melandri’s block sends the squad ahead, the break ends. The pink captain plays fine and his hand out is worth 18-16, Busto time out. Even the guests close a break taking on 20-18, Casalmaggiore time out. Back on the field and Frantti interrupts the inertia, diagonal and 19-20. All arm for Dimitrova who finds the 20-23, the ball out of the busts then gives away the 21-23 and Dimitrova’s block makes it 22-23. Mangani’s ace arrives and equalizes 23-23. The host wall closes 25-23. Top scorer: Dimitrova 7, Montibeller 7

Fourth set. It starts with an ace from Piva, inside immediately for Perinelli, Omoruyi equalizes, Degradi then in the pipe carries on his. It was Frantti who grounded the ball diagonally to make it 2-2. Carlini looks into the opposite field and lands his second touch, Olivotto’s attack is then out, 4-4. Dimitrova takes care of putting his forward 5-4, Carlini finds the ace and goes on 6-4 Casalmaggiore. The pink captain finds the 7-4 and forces coach Musso to call time out. Raised with one hand by Carlini and Melandri shoots his first time in three meters, 8-5. Melandri secondly makes 9-8, Lohuis then brings his scores into double figures, 10-8. Yet another hands out by captain Dimitrova, 11-10 Vbc Trasporti Pesanti, to then reiterate with an ace, 12-10. Cunning game in run-up by Carlini who scores 13-10. Another ace from Dimitrova, 14-10, time out Busto. We return to the field and Piva’s hands out is effective, 15-10. Omoruyi tries to pass the pink wall but Lohuis is well placed, 17-13. Mamma che diago Dimitrova, literally flying sideways, 18-14, then comes the ace from Carlini, 19-14. Great ball from Carlini for the unforgiving captain, 20-15, followed by the first half from Melandri, 21-15. Frantti’s super pipe that passes over all and scores 22-16. On 23-19 Vbc, the Casalmaggiore bench calls time out. Frantti in pipe finds the set point 24-19. Dimitrova takes care of closing 25-20. Top scorer: Dimitrova 7, Omoruyi 6

Tie Break. Casalmaggiore opens the last stage, Olivotto then draws, 1-1. Degradi in the pipe makes it 2-1, but Frantti finds the touch of the block, 2-2. Dimitrova with full arm carries on his 3-2, Omoruyi draws. Frantti diagonally finds the 4-3, Omoruyi still draws. Another grand pipe from Frantti, 5-4, Lohuis extends 6-4, time out Busto. Back on the pitch and Montibeller finalizes, 5-6, a confusion error by the squad evens the score 6-6. Captain Dimitrova brings his lead 7-6, Pugs cunningly sends everyone to change the field on 8-6. Montibeller makes 7-8 with one hand out, then Busto equalises. Lohuis finds the touch of the block with his fast, 9-8 Vbc, Montibeller’s attack is then out, 10-8. Degradi shortens diagonally, Frantti restores distances in the same way, 11-9. Omorouyi finds the 10-11, Dimitrova the 12-10. Carlini finds yet another ace in the match, 13-10, time out Busto. Omorouyi shortens, time out Casalmaggiore. Melandri’s monster block on his return, match point 14-11. The captain takes care of it!!!! Wall and 15-11.

Laura MelandriCentral Vbc Heavy Transport Casalmaggiore: “Perhaps we didn’t start very well but we were really good at overturning the game by imposing our game and bringing home two fundamental points for the standings. I’m very happy with my game but above all I’m proud of my team!”.

Alice Degradesspiker E-Work Busto Arsizio: “Too bad, because we’ve always been there and we’ve always fought. Reception didn’t really work this evening and from there we struggled to build solutions. For the rest we played well, improving in all fundamentals. Let’s work on the reception and think about the CEV“.

(the photos are by Simone Contesini)

David Martin is the lead editor for Spark Chronicles. David has been working as a freelance journalist.
Previous Ana De Armas celebrates her birthday on set, the Instagram post
Next Selena Gomez against haters: «I’m perfect the way I am. I don’t care about my weight”