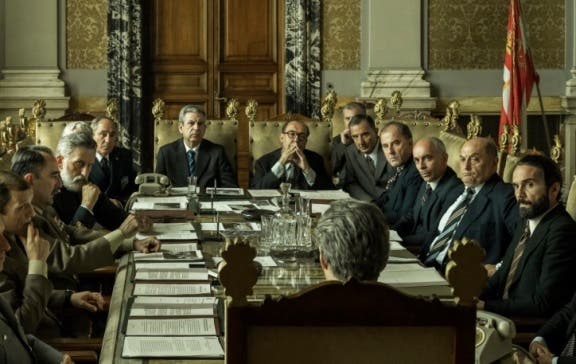 Exterior Night: previews of the last episode of Thursday 17 November 2022

Exterior Night, three early evenings directed by Marco Bellocchio for The Apartment, Kavac Film and Rai Fiction in co-production with Arte France, it recounts the kidnapping of Aldo Moro from many points of view: those of those who were involved in various capacities and in some cases tried to save him, in others they pretended to do so, in others they openly boycotted all negotiations. They are the Moro family, the politicians, the priests, the Pope, the professors, the magicians, the forces of order, the secret services, the members of the Red Brigades at large and in prison, the mafiosi, the infiltrators: some of the six episodes that make up the fiction (they will all be available in live streaming and also on Rai Play) have titles that represent them. To follow, all the advances updated from time to time.

1×01 Aldo Moro: Rome, March 1978. Aldo Moro, president of the Christian Democrats, has been freed by the Red Brigades and is now scrutinizing his party mates with merciless eyes, gathered at the bedside of his hospital bed: Giulio Andreotti, Francesco Cossiga and the party secretary Benigno Zaccagnini. Street clashes are raging outside. In reality, Aldo Moro has not yet been kidnapped and is instead working to give birth to the first unity government in the history of the republic with the external support of the Italian Communist Party.

1×02 The Minister of the Interior: Francesco Cossiga, new Minister of the Interior, presides over the council of war convened following the kidnapping of Moro. Domenico Spinella, head of Digos, would like to involve the PCI security managers in the investigations. Meanwhile, Red Brigade member Faranda is recognized by several witnesses. In the sweep checks that follow, the police officers arrive as far as the hideout in via Gradoli.

1×03 The Pope: Monsignor Curioni approaches one of the lawyers of the historic nucleus of the BR so that he can act as an intermediary: he would like to unofficially enter into negotiations with Moro’s kidnappers on behalf of Pope Paul VI, who is willing to pay a huge ransom in order to free his friendly politician. Through Cardinal Casaroli, Paul VI also explored the state’s opinion on the possibility of paying a ransom in cash.

1×04 Terrorists: Between 1976 and 1978 Adriana Faranda embraced the revolutionary cause of the BR, abandoned her daughter and went into hiding together with her partner, Valerio Morucci. She joined the “Roman column”, she participates in the kidnapping of Moro and becomes the relay that delivers the press releases of the BR to the newspapers.

1×05 Eleanor: Eleonora Moro receives the news of her husband’s kidnapping with desperation but extreme dignity and closes herself with her children in absolute secrecy, trusting in the State apparatus to save her husband. Despite the reassurances of politics, the woman gradually realizes that her husband risks being “sacrificed” and asks the Pope for help.

1×06 The End: A priest is taken by the Red Brigade members in great secrecy to the hideout in via Montalcini where Moro is held prisoner. The President of the DC confesses the fierce hatred he feels for some of his party “friends”, above all Andreotti. On May 9, 1978, Moro was loaded into the trunk of a red Renault 4 and killed.

David Martin is the lead editor for Spark Chronicles. David has been working as a freelance journalist.
Previous Avatar 2: Zoe Saldana & Sam Worthington on Early Sequel Conversations With Cameron | Cinema
Next World Cup 2022, France-Morocco 2-0: Argentina is in the final