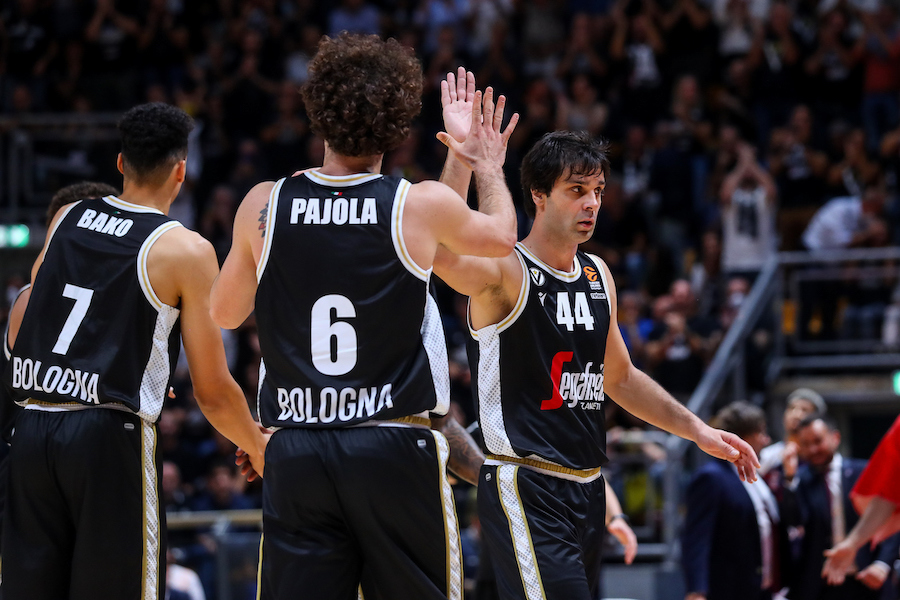 five minutes to the end of the match – OA Sport

THE VIRTUS BOLOGNA WON! Great performance by Sergio Scariolo’s team, which gets its second victory in the Euroleague. This is truly an extraordinary blow for Bologna.

THE BOUNCE IS OF THE VIRTUS!

92-95 Musa scores the first. He must be mistaken for the second.

Mickey does it on Musa. Missing a second at the end.

Fifth Foul by Deck on Coordinier.

87-91 Yabusele crushes and scores with Mickey’s foul. Here the long of Virtus is naive.

Mickey risks a lot and almost breaks through on Deck. The referees pardon him and whistle two free shots.

Llull’s triple does not enter! A minute and a half to go!

83-87 Deck scores in penetration. Virtus timeout. It’s a complicated time for black Vs.

Luckily Musa misses the triple of -3.

78-86 The Argentine scores the extra free.

The French unfortunately misses the free.

75-86 COOOOOOOOOORDINIEEEEEEEER! The play of this Euroleague round. Monstrous smash with Tavares foul.

70-84 Nice support for the glass by Coordinier.

THE THIRD FOURTH ENDS! An amazing Virtus is six points ahead when entering the last ten minutes.

59-65 Deck tears off the rebound in attack and finds the tap in offensive.

57-65 Teodosic marks the free of the technician.

53-59 Two free from Lundberg. Five minutes to the end of the third quarter.

51-54 Jaiteh dominates under the scoreboards and signs the +3.

49-47 Taveres tears off the rebound and leans against the glass.

45-45 LUNDBERG! He steals the ball and scores on hand.

THE SECOND FOURTH ENDS! Virtus is fully in the game in Madrid. Real are four points ahead with a wild 13-point Mario Hezonja. For Virtus there are 10 Bako points.

He fails the offensive tap in Weems.

45-40 Hezonja unleashed! Two other points of the Croatian.

Beautiful block from Jaiteh on Deck. Two and a half minutes to go.

36-34 Lundberg scores the free kick of the coach whistled at the Real bench.

32-29 Pajola signs the -3. Nice reaction from Virtus and timeout for Real.

32-25 Bako’s excellent impact in the match. Another offensive rebound and a dunk for Virtus’s -7.

32-23 Another arrest and shooting by Hezonja. Virtus timeout.

30-20 Triple of Cornelie from the corner.

27-18 Triple from Hezonja to open the second quarter.

THE FIRST FOURTH ENDS! Mild rhythms at the beginning of the game. Real Madrid lead by six points at the first siren.

18-14 An excellent Bako makes no mistake from the line.

11-8 Musa’s entry pad. Three and a half minutes to the end of the first quarter.

7-7 Bako dunk after a good action by Virtus.

7-5 Two free by Tavares, but above all Mickey’s second foul.

5-5 Tavares scores with Ojeleye’s foul. The long Cape Verdean, however, misses the free.

3-5 Lundberg with the left-handed pad.

8.42 pm: THERE WILL NOT BE SHENGELIA! Nothing to do for the Georgian who followed the team, but he will not play.

20.37: Sergio Rodriguez has been in the ranks of Real Madrid this season. The former Olimpia Milano played his last match in Italy against Virtus, in Game 6 that led to the Lombard Scudetto.

20.34: Return to Real Madrid too, which finds Adam Hanga. The Spaniards, however, will have to do without Fabien Causeur for plantar fasciitis in his right foot. Still absent Nigel Williams-Goss.

20.30: Virtus will meet Tornike Shengelia today. The Georgian returns to Scariolo’s disposal after he has missed the European Championships and the first part of the season. Certainly a very important return, but it is obviously necessary to understand how much the former CSKA MOsca will be able to play.

20.27: On the other side there is a Real Madrid that is going to alternating current. Record of 2-2 for the Spaniards, who lost, however small, in Barcelona and then at home to Olympiacos. The victories came with Panathinaikos and Stella Rossa.

20.23: Virtus is back from the double away defeat against Zalgiris and Partizan. In Lithuania, Bologna was in control of the game, but made a comeback in the last minute. In Serbia, on the other hand, Virtus collapsed from the first quarter and was no longer able to remedy it.

20.20: The perfect match will be needed by Scariolo’s team, which is hunting for the second victory of the season after the one against Bayern Munich.

Good evening, and welcome to LIVE LIVE by Real Madrid-Virtus Bologna, a match valid for the fifth day of the 2022-2023 Euroleague. Scariolo’s team is looking for a company on Spanish soil.

After the two consecutive defeats against Zalgiris and Partizan, Virtus Bologna tries to regain victory on one of the most complicated fields in Europe. We really need the perfect match for Teodosic and his teammates against Real Madrid, one of the teams aiming for the Final Four.

Bologna did not start the Euroleague well with three defeats in four games. The only victory came at home against Bayern Munich, but there are big regrets about the defeat of Kaunas, with the black Vs having the game in control, before suffering the comeback of the Lithuanians. However, Real are not shining very much, as they have already lost two games this season, albeit both by two points against Barcelona and Olympiacos, while they beat Panathinaikos and Stella Rossa.

The duo’s ball Real Madrid-Virtus Bologna, match valid for the fifth day of the Euroleague 2022-2023is scheduled at 20.45. Have fun with OA Sport LIVE LIVE!

David Martin is the lead editor for Spark Chronicles. David has been working as a freelance journalist.
Previous wholesale and mobile pull the bill
Next “Migrants produce wealth, but they are increasingly poor and excluded from social benefits. On the rise those fleeing climate change”