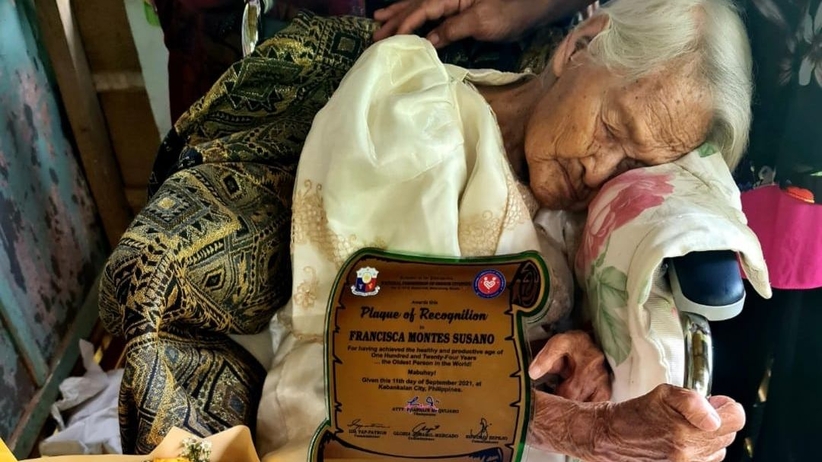 Francisca Susano is dead. She was considered the oldest man in the world

Francisca Susano, believed to be the oldest person in the world, died in the Philippines at the age of 124, Daily Mail reported, citing reports from local officials. She was the last living person to be born in the 19th century. The woman did not live until the Guinness Book of Records verified her application and awarded the elderly Filipina the official title.

Francisca Susano, known as Lola Iska, died on Monday at around 6:45 pm at her home in Kabankalan on the Philippine island of Negros. In September, the Guinness Book of Records reported that it verifies information about the age of a woman, which is necessary to recognize her as the oldest living person in the world.

Susano has joined a long list of contenders for the title that officially belongs to French Jeanne Calment. The woman died in 1997 at the age of 122.

Francisca Susano is dead. She was considered the oldest man in the world

The cause of death has yet to be determined, while Susano is known to show no symptoms of COVID-19. As the Daily Mail noted, the woman was born on September 11, 1897, while the country was still ruled by Spain and Queen Victoria was seated on the throne of Great Britain.

Politician Rodolfo Ordanes submitted a petition after Susano’s last birthday, calling on the House of Representatives to award the woman £ 15,000 in recognition of her longevity. In a Tuesday statement by the city of Kabankalan, it was written: “With sadness in our hearts we received the news that our beloved Lola Francisca Susano had died on Monday evening, November 22nd. Lola is considered the oldest person in Negros Occidental and the Philippines.

Her declaration that she is 124 years old and the oldest person in the world is approved by the Guinness Book of Records. Mayor Pedro Zayco, Jr., Vice Mayor Raul Rivera and all city officials, as well as Kabankalan City residents express condolences and pray to Lola Iski’s family during mourning. Lola will always be an inspiration to us and be our pride ”.

According to the Guinness Book of Records
the oldest person alive today is Kane Tanaka, 118-year-old Japanese. According to the Daily Mail, there are approximately half a million people over the age of 100 in the world. Experts estimate that a person can live up to 130 years.

Have you witnessed an important event? Have you seen anything intriguing or outrageous? Would you like us to describe an important problem? Write to us! You can send information, photos and recordings to us at [email protected]

Videogames entered his life in the late '80s, at the time of the first meeting with Super Mario Bros, and even today they make it a permanent part, after almost 30 years. Pros and defects: he manages to finish Super Mario Bros in less than 5 minutes but he has never finished Final Fight with a credit ... he's still trying.
Previous Liverpool – FC Porto. The English with a club record in the Champions League
Next WoW: Shadowlands – patch 9.1 did not attract players