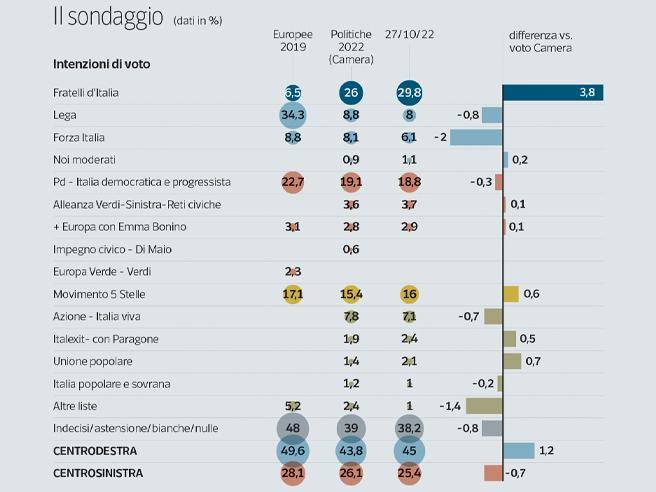 In third place the M5S (16%). Calano Lega and Forza Italia. For Giorgia Meloni, approval of 54. According to the interviewees with the new executive more control over migrants but less protected civil rights

The last two and a half years have been marked by a widespread sense of harmony favored first by the health emergency and then by the government of (almost) national unity which have contributed to attenuating political conflict and guaranteeing social peace. The electoral campaign and the vote of 25 September put an end to this climate, sanctioning the return to a heated conflict between parties and electorates in a scenario that has become four-pole. It is therefore not surprising that the views on the new government and Giorgia Meloni are less cross-cutting and more polarized than those regarding her predecessor and the outgoing government. Positive judgments slightly outweigh negative ones for the executive infant (42% versus 40%) and to a greater extent for the premier (44% versus 38%); the approval rating – calculated as always by relating positive and negative evaluations, excluding those who do not express an opinion – is equal to 51 for the government ea 54 for the Prime Minister (the survey was conducted after her keynote address to the Chambers). These figures indicate an opening of credit also by a minority but not negligible share of voters who did not vote for the parties of the majority.

We must take into account, in fact, that the center-right has imposed itself with the 43.8% consents (12.3 million voters) but, taking into account the record-breaking level of abstention (16.7 million voters have deserted the polls and to these are added 1.3 million blank or null ballots) and the votes obtained by opposition parties, the winning coalition represents the 26.7% of the total number of voters. In other words: the majority in the polls is a minority in the country. In this context it was not at all obvious for Meloni to obtain a positive opinion from 23% of center-left voters, from 27% of pentastellati and from 29% of abstentionists, which raises his approval far beyond the level of the electoral basin of the winning coalition.

Compared to previous premieres, Giorgia Meloni obtains values ​​substantially in line with those who have led very politically characterized executives (Prodi II, Berlusconi IV, Conte II) but lower in comparison with the presidents from a technical / institutional profile (Monti and Draghi) and with those who led executives of (more or less) broad agreements (Letta and Renzi). In view of the credit opening, however, the opinions on the governance team are more negative (42%) than positive (38%), presumably due to the presence of 11 ministers who had already been part of previous center-right executives. It should be noted that among the electors of the Brothers of Italy the 20% is expressed negatively and among those of the allies dissent rises to 23%confirming the fact that the choice of who to put at the head of the dicasteries is never painless and causes various discontent among the allies.

As far as the forecasts on government action are concerned, the survey brings out lights and shadows, in fact considering eight different areas of intervention, for two of these the forecast is for an improvement (immigration control and tax policies), for two others the optimists and the pessimists divide in half (economic recovery / GDP stability and Italy’s relationship with the European Union) and for the other four those who expect a worsening prevail (environmental policies, cohesion and social peace, reduction of inequalities and support for the weakest social groups, strengthening of civil rights). It should be noted that on almost all the issues examined, approximately one in five suspends the judgment pending the results and a similar share shows disenchantment, in the belief that things will remain unchanged. The predictions on the duration of the government are undoubtedly influenced by the tensions within the majority that arose on the occasion of the election of the president of the Senate and the choice of ministers: one in four Italians (27%) provides that the executive will last for the entire legislature, the 10% for three or four years, the 20% for a couple of years while the 18% believes it will be short-lived.

Lastly, the voting guidelines and the approval of the leaders. The election result confirmed Ennio Flaiano’s famous aphorism according to which “Italians are always ready to rush to the rescue of the winners”: FdI sees increase by 3.8 points the consensus with respect to the result obtained in the polls, touching the 30%; to follow the Pd with 18.8% (down 0.3%), the M5S with 16% (+ 0.6%)the Alloy with 8% and the Third pole with 7.1% (enter me in inflection of a few decimal places), then Come on Italy which records the most significant decrease (it loses 2 points), settling at 6.1%. Overall the center right thanks to the growth of FdI and, to a lesser extent, of We moderates (+0.2), increases by 1.2% going from 43.8% to 45% and increasing the advantage over the center left falling by 0.7% (from 26.1% to 25.4%). Among the leaders, excluding Giorgia Meloni who in the new role saw an increase in popularity by almost 20 points compared to the end of July, there was a strong growth in appreciation for Count (+5)which leads the ranking, e Wolves (+3)while Read marks the most significant decline (-7) followed by Berlusconi and Calenda (both -5) and Fratoianni (-3).

In a context characterized by a very divided opposition, the increase in consensus for the center-right and for Giorgia Meloni denotes the strong expectation of remedying complex and urgent problems, starting with the economic ones (inflation and the cost of energy primarily
) and social (growing inequalities and the risk of poverty) which have led to a growing demand for protection by families and businesses in difficulty. One wonders how long the “honeymoon” that usually accompanies governments in the initial phase of their life will last. Much will depend on the ability to intervene in emergencies and on the implementation of the reforms envisaged by the NRP, but the unknowns are above all two: first of all, the ability to maintain social peace, an aspect that is anything but taken for granted after the experience of government of national unity; it is a problem of economic resources and budgetary constraints, as well as of method (willingness to involve the social partners and others). Secondly, the cohesion of the majority: the latter has always been the aspect that is most reflected in the appreciation of the government, regardless of political color. In this regard, the growth of the consensus of FdI and Giorgia Meloni to the detriment of the allies could represent a serious threat.

Videogames entered his life in the late '80s, at the time of the first meeting with Super Mario Bros, and even today they make it a permanent part, after almost 30 years. Pros and defects: he manages to finish Super Mario Bros in less than 5 minutes but he has never finished Final Fight with a credit ... he's still trying.
Previous Honda, new Forza 350 my 2023. Will it also arrive in Italy?
Next Emilia Clarke opens up to a possible future return of Daenerys