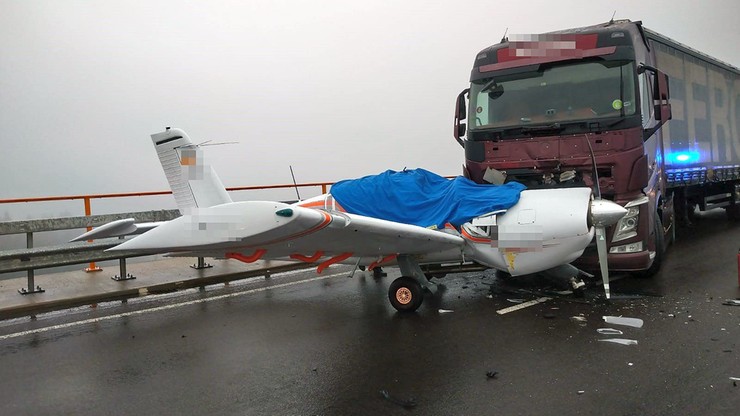 Germany. The plane crashed into a truck on the highway. He had to make an emergency landing

The cause of an emergency landing is being investigated. The police in Pirmasens opened an investigation

The pilot of the ultralight plane experienced moments of terror. First, after a crash, he had to make an emergency landing on the A62 motorway. Although the maneuver ended with success, he watched the speeding truck hitting his plane with no chance of any reaction.

The unusual and dangerous situation occurred on Saturday just after 12 o’clock on the A62 motorway near Thaleischweiler-Fröschen in Rhineland-Palatinate.

The pilot of the ultralight plane had a problem with keeping the machine in the air (the cause of these problems has not been clarified yet). He had to make an emergency landing.

SEE: Germany. The car pulled into Weeze Airport. The Ryanair plane has aborted its landing

The landing on the A62 highway was successful. Unfortunately, a moment after being safely grounded, a speeding truck crashed into the plane. After the impact, she dragged the machine for several meters.

The pilot was seriously injured

Several fire brigades and the police arrived, the services had to clear the area and secure the route. The A62 motorway was closed until late evening hours.

The cause of an emergency landing is being investigated. The police in Pirmasens opened an investigation.

Videogames entered his life in the late '80s, at the time of the first meeting with Super Mario Bros, and even today they make it a permanent part, after almost 30 years. Pros and defects: he manages to finish Super Mario Bros in less than 5 minutes but he has never finished Final Fight with a credit ... he's still trying.
Previous Zagłębie Lubin – Lech Poznań. Lech fans invade Lubin
Next The Public Prosecutor General again stood up for the “franchisees”!