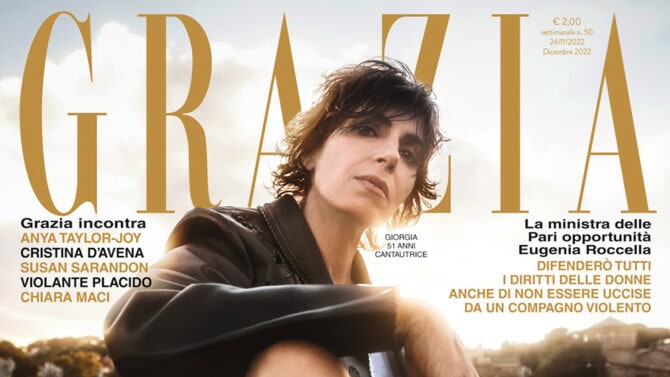 Grazia is on newsstands with Giorgia


Here’s what awaits you in the new issue of Grazia, on newsstands this week!

The new number of Grazia is already on newsstands and app. There cover star is Georgia. The singer-songwriter poses on the streets of her Rome illuminated by the light of the sunset. In the interview she brings out her rebellious soul and her sensitivity. She talks about how the shy teenager discovered how liberating it was to sing the first time she stepped on stage. She opens up about the pains of her life and talks about her relationship with her twelve-year-old son, with her partner Emanuel Lo, or the fact that she still feels, at 51, a twenty-seven year old.

In the news pages, the Minister for the Family, Birth Rate and Equal Opportunities, Eugenia Roccella, talks with Grazia about the rights she undertakes to defend: not to die of domestic violence, to be free to choose not to be mothers, but also to be without sacrificing one’s personal fulfillment and many others. On the eve of the day against violence against women, three survivors of domestic abuse tell Grazia how they found the courage to say enough and rebuild their lives. But we also write about the inhumane 26-story skyscraper built in China, where thousands of pigs are raised to be slaughtered.

We interview Anya Taylor-Joy, The Chess Queen of the Netflix series, for her new film The Menu. The American diva Susan Sarandon tells us the key moments of her career and her life. Cristina D’Avena, a myth of our childhood, celebrates 40 years of songs but still feels like a child.

Marilyn Monroe’s style, back in the limelight with the film Blonde, inspires the fashion pages of Grazia. And the make-up artists who created the make-up on the film set talk about the transformation that actress Ana de Armas underwent to play the diva. Here they reveal the secrets to achieving that lunar pallor, cherry red lips and platinum locks.

Check out other articles from Magazine