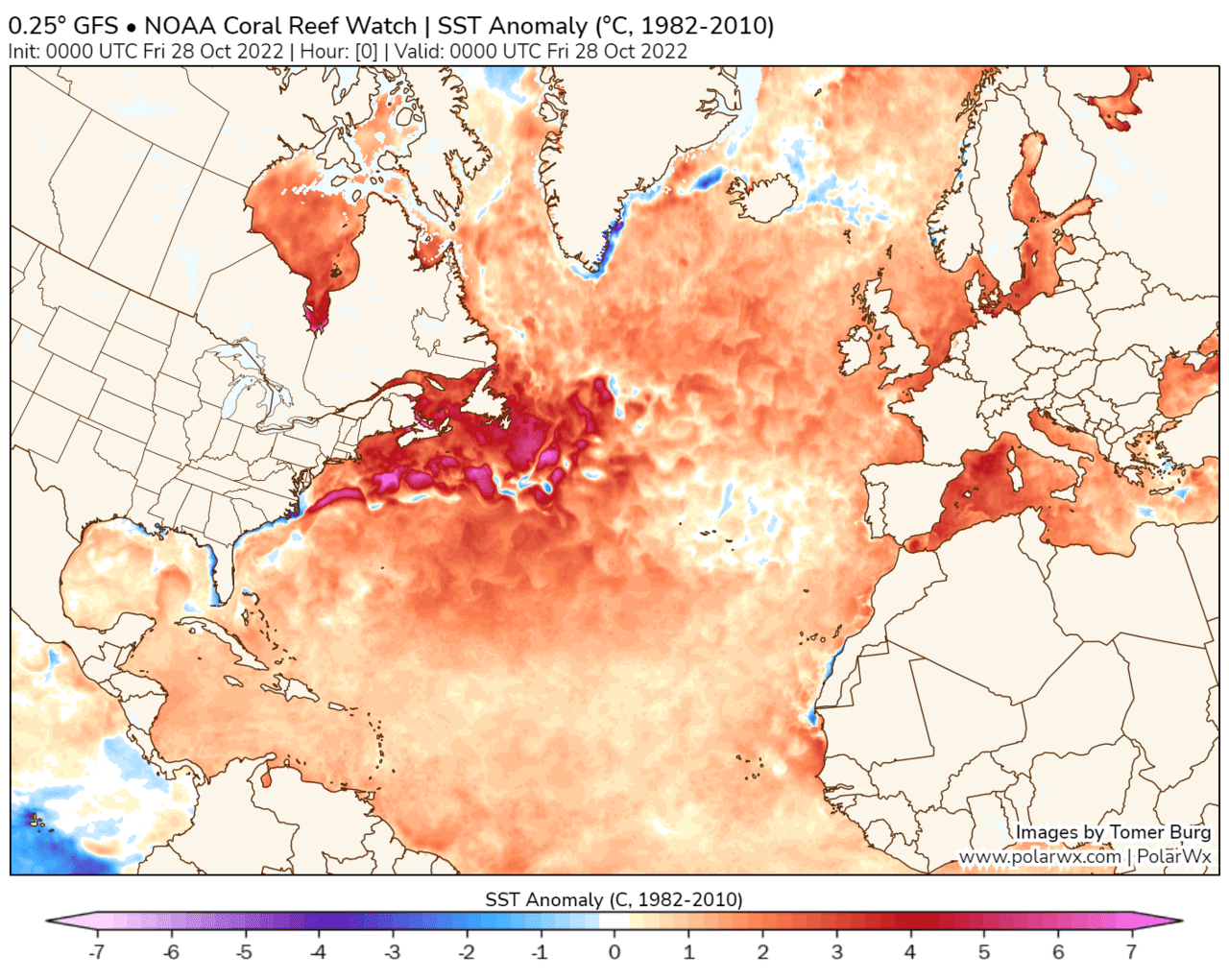 Gulf Stream, chaos breaks out that could suddenly change the winter

For decades there has been talk of a cooling of the Gulf Streamwhich would have the consequence of reducing, even considerably, its effects in Europe, lowering the winter temperature. But in this 2022 something has changed, completely unexpected, also because there was a massive melting of the glaciers, especially in late summer in Greenland, which should have increased a slowdown in the Gulf Stream. But not only that, as you will read in our articles, the global temperature increase cools and slows the Gulf Stream.

Chaos in the Atlantic Ocean

The novelty this time is that across the Atlantic Ocean northern measure above average temperaturesbut not only, by observing in detail, the area where the current flows Gulf currently has temperatures above the climatic average of this period also of 5 ° C if not more. 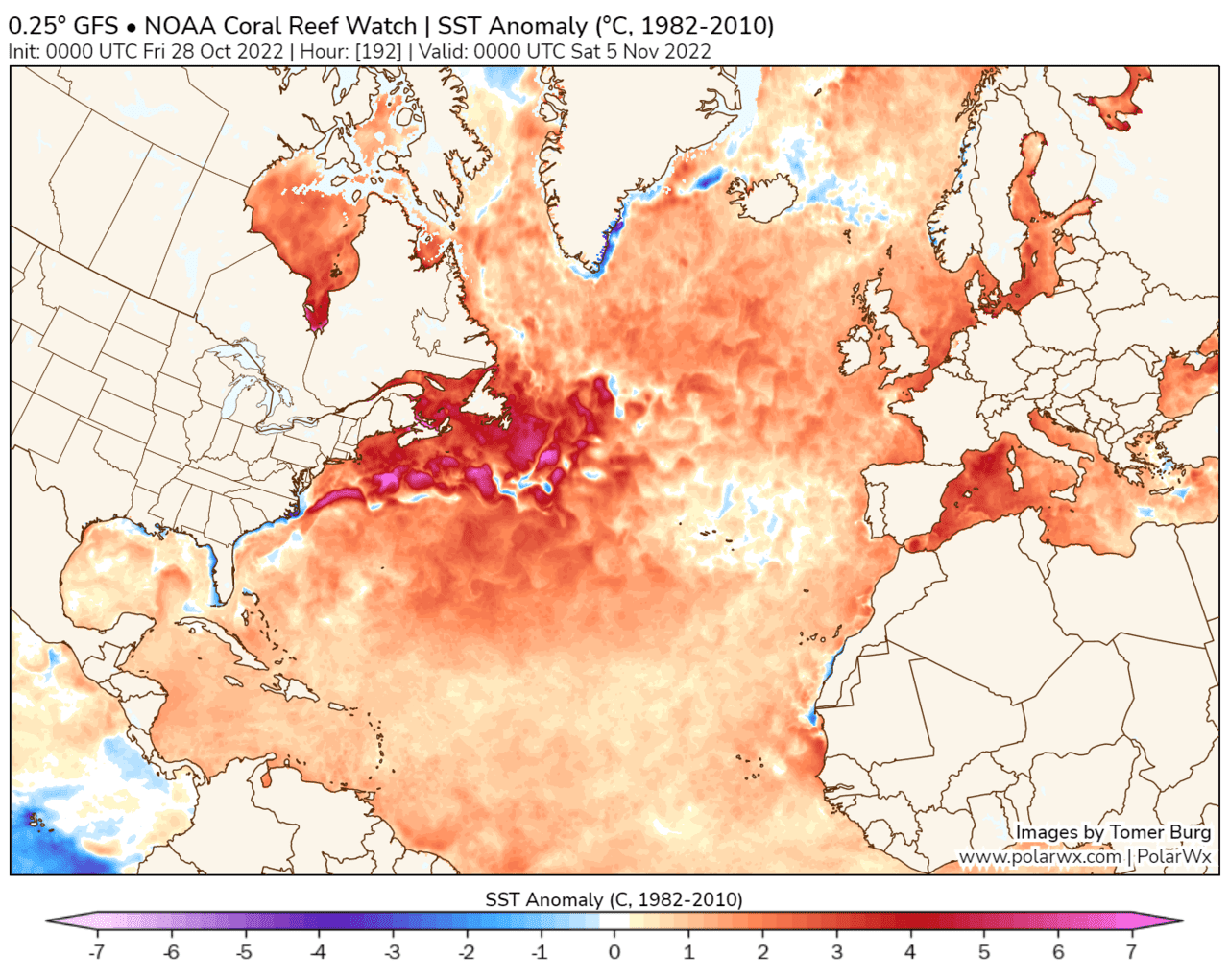 The warming of the Gulf Stream was unexpected, and there are no scientific publications mentioning it. And currently no one deals with this topic, at least in scientific publications. Perhaps it is too early to draw conclusions, in fact we will simply limit ourselves to giving the news of this change in our opinion much more than noteworthy.

The maps we see below indicate that the entire Northern Ocean, and not just the Mediterranean Sea, has sea surface temperatures much higher than the average for this time of year. And therefore also the Gulf Stream appears to us with values ​​on average above the norm up to and beyond 5 degrees.

We do not know if this will have repercussions on the next winter, but we think this phenomenon will be studied and soon there will be publications by authoritative scientists on the subject, and we will not fail to talk about it.

Our theory is that a warmer-than-average Gulf Stream can reduce cold in Atlantic Europe. But this event could later lead to a slowdown and even block. This could be the stage that leads to the blockade of the Gulf Stream in a not too distant time (obviously we are talking about years).

Gulf Stream, what they say

With regard to the Gulf Stream up to now there has always been talk, in the scientific field, about the lowering of the temperature and its reduction of speed. Condition already in place and measured by sophisticated instruments for years now. It is widely argued that the Gulf Stream will unblock, leading to a lowering of the winter temperature across northern Europe with consequences also in the Mediterranean, especially the western one. Furthermore, a colder sea would increase the chances of winter storms, to the detriment of the Anticyclone of the Azores and Bahamas which instead became prevalent in the winters of the last decade.

A blockade of the Gulf Stream would have planetary consequences, as does the warming and cooling of the waters of the equatorial Pacific Ocean during the El Niña or El Niño events. But the Gulf Stream is in Europe, and we would have the greatest effects.

Videogames entered his life in the late '80s, at the time of the first meeting with Super Mario Bros, and even today they make it a permanent part, after almost 30 years. Pros and defects: he manages to finish Super Mario Bros in less than 5 minutes but he has never finished Final Fight with a credit ... he's still trying.
Previous Red Bull received a $ 7 million fine for violating the Formula 1 financial regulations
Next Goran Visnjic joins the cast of Vikings: Valhalla