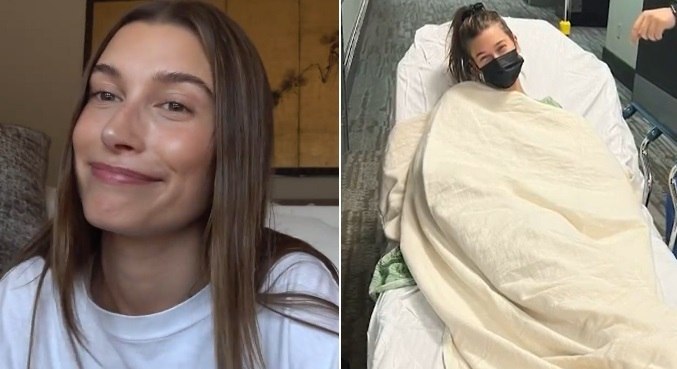 Hailey Bieber details brain clot scare: ‘The right side of my face started to fall off’ – Entertainment

Hailey Bieber decided to open up about the clot in the brain that you recently discovered.

The model, who is married to singer Justin Bieber, was hospitalized in March after having symptoms similar to those of a stroke.

In a video posted on the web, Hailey detailed the scare she got while talking to Justin: “We were in the middle of a conversation and out of nowhere I felt a strange sensation that traveled from my shoulder to my fingertips, which were very numb and weird,” she began.

Justin then asked if the woman was feeling okay, but she couldn’t answer, “Justin was like ‘Are you okay?’ and I just didn’t answer because I wasn’t sure. He asked again, and when I tried to answer I couldn’t speak. The right side of my face started to droop. I couldn’t form a sentence.”

The model explained that she and her husband were sure she was having a stroke. The pop star then called a doctor, who proceeded to test Hailey’s vitals.

Hailey had a transient ischemic attack, similar to a stroke, but which usually passes quickly: “It’s basically like having a mini-stroke. It definitely feels like a stroke, but my body was able to resolve everything quickly and I haven’t had a stroke.” more problems for the rest of the day and for the entire time I was in the hospital”.

According to her, doctors concluded that three things caused the clot in the brain: “The first is that I recently started taking birth control pills, something I should never have done, because I’m a person who has always suffered from migraines, and I didn’t talk about it. with my doctor about this. So ladies, if you suffer from severe migraines and plan on taking pills, speak to your doctor, because having a stroke is a potential side effect. The second thing is that I recently had Covid, and they believe it was a factor that played a part. The third thing is that I went through a long flight. I slept the entire flight, didn’t get up or move. Doctors believe it was the ‘perfect storm’ that led to this clot.”

Hailey also discovered another health issue that led to the “mini-stroke”. She has an atrial septal defect, a small hole in her heart that didn’t close when she was born. The clot that reached the model’s brain would have escaped there.

“Recently, we closed the hole, and it was all smooth sailing. I’m recovering well, really fast, and I feel great. Honestly, I’m just relieved that we were able to figure out what it was, get it sorted out. I’ll be able to move on after this really scary situation and just live my life,” she concluded.

Check out the full video with the rant below.

Videogames entered his life in the late '80s, at the time of the first meeting with Super Mario Bros, and even today they make it a permanent part, after almost 30 years. Pros and defects: he manages to finish Super Mario Bros in less than 5 minutes but he has never finished Final Fight with a credit ... he's still trying.
Previous this is where the shooting of the film with Vin Diesel and Jason Momoa will take place
Next San Giorgio a Cremano, from Recovery the first 10 million for redevelopment projects