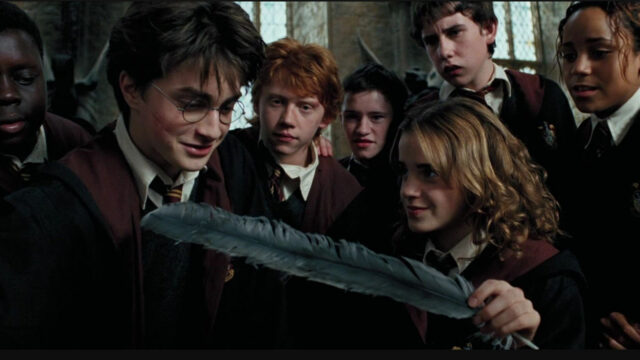 Harry Potter, Professor Sprite says she has made little money

Daniel Radcliffe and that photo of Cameron Diaz while filming Harry Potter. For a few days Tom Feltonwho in the successful film saga played the role of Draco Malfoy, has recently published a book. In “Beyond the Wand: The Magic and Mayhem of Growing Up a Wizard”The actor collected some lived moments and anecdotes never told behind the scenes of the set. In the pages of the book, for example, we learned about Felton’s crush on his colleague Emma Watson. In another excerpt, which was taken from Insiderthe interpreter leaked a secret from his colleague Radcliffe.

The Harry Potter crew said that if a moment of magic or any kind of special effect could practically be done, that was the best way to do it. This was especially true in the early days, when visual effects teams had less advanced technologies at their disposal. The broomstick was a metal pole equipped with a very uncomfortable bicycle saddle. There were stirrups for the feet and a harness to keep from falling. They tied you to the pole so you couldn’t fall and they had a more elaborate device to move you up and down, left and right. Fans were blowing in your face to make it look like you had wind in your hair. It was important that all players looked in the right direction when shooting. When the first assistant director shouted “Bolide!”, You had to look at the tennis ball as if it were, in fact, a ‘bolide’.

Tom Felton he later revealed that Daniel Radcliffeto avoid going wrong during this delicate moment, he had found a trick and used a photo of Cameron Diaz.

Sometimes there was more than one tennis ball, and as one looked a lot like another, after a while they gave us more individual items to fasten. We have chosen images of something or someone we care about. Daniel Radcliffe had a picture of a particularly beautiful Cameron Diaz. Instead, I chose an image of an even more beautiful carp.

A passion, that for Diaz, of which Radcliffe had spoken several times during the various interviews released over the years. “I had photos of Cameron Diaz and Drew Barrymore pinned to my bedroom wall“, He revealed in an old interview from 2014. In the book Felton, as anticipated, he also told of his crush on Emma Watson.

I’ve always had a secret love for Emma, ​​although maybe not in the way people expect. There were rumors that our relationship was more than we wanted to know. I denied that I liked her in that sense but the truth was different. My girlfriend at the time knew very well that there was something unspoken between us. I remember using the famous phrase: ‘I love her like a sister’, but there was more.

David Martin is the lead editor for Spark Chronicles. David has been working as a freelance journalist.
Previous Berlusconi also wants the proxies to publishing and imposes a Mediaset man to provide providence: Alberto Barachini on pole as undersecretary
Next InSight, from the earthquake to the meteorite