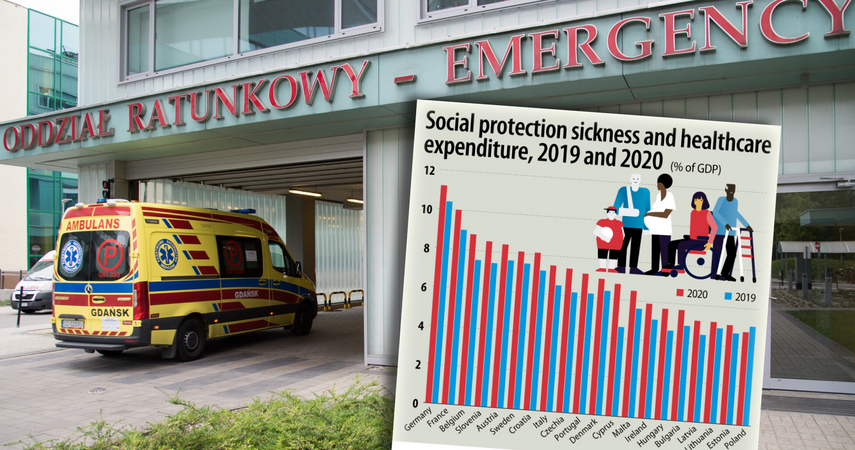 Health and social protection expenditure. Eurostat data for 2019 and 2020.

Eurostat presented data on expenditure on social protection and health care in 2020 in EU countries. Only in Poland, expenses for these purposes decreased compared to 2019 – they amounted to 4.8%. This is the worst result in the EU. However, let’s take a closer look at what the office has calculated. There is a catch.

Spending on “social protection and health care” is quite a broad and imprecise term. What did Eurostat mean? If you read the description of the analysis, it is, among others, o transfers in cash or in kind made to households and individuals by social protection systems.

Elsewhere, the Office talks about benefits for (advanced) age and disease or healthcare. It is therefore part of health-related care expenditure, not all. It is also worth noting that Eurostat talks about early estimates which are “a small subset of the annual data”.

Knowing a bit more about what the office took into account, let’s take a look at the results of the analysis.

In 2020, spending on social protection and healthcare was highest in:

Eurostat: All countries increased their spending, except Poland

The data presented by Eurostat, as already mentioned, concern expenditure in relation to GDP. The European Statistical Office compares 2019 and the pandemic 2020. And this includes it contributed to the weak position of our country. While spending on social protection and health care across the EU was higher, the pandemic had a negative impact on GDP.

All the countries analyzed, compared to 2019, increased these expenditures in relation to GDP, except for Poland. However, it is worth paying attention to the explanation of Eurostat.

“Expenditure on health and sickness as a percentage of GDP increased in all EU Member States except Poland. However, this is partly due to the fact that nominal GDP has decreased as a result of the COVID-19 pandemic. In fact, spending on social protection benefits has increased overall in all Member States, “explains the office.

Poland’s result was widely commented on in social media. The Protesting and Strike Committee for Healthcare also referred to it. “We spend the least in the European Union. Dear Ministry of Health, will you also discuss this data?” – asked the leaders of the committee’s Twitter account.

PIE in spring: Poland in the tail of EU countries

These are not the first data showing that we are doing very badly in comparison with the EU countries. In spring this year, the Polish Economic Institute pointed out that although spending on health care in Poland was growing nominally every year, in relative terms, i.e. in relation to GDP, they have remained at an almost constant level for over 10 years.

The value of funds allocated to health care in Poland, our country ranks among the European Union countries that invest the least in this sector – pointed out PIE in May. The institute’s experts pointed out that although comparing countries in terms of the share of health care expenditure in GDP is more appropriate than comparing them in terms of nominal expenditure, the validity of such rankings can also be questioned. Already in the late 1970s it was noticed that richer countries very often spend a greater percentage of their GDP on health than poorer countries (at least up to a certain level of income) – they explained.

PIE then took a closer look at the 2018 data collected by the World Health Organization (WHO), then, in relation to GDP, Polish expenditure on health care amounted to 6.3 percent. The Institute indicated that the problem was the lack of an upward trend in the level of outlays. Of course, the nominal expenditures are higher every year, but in terms of their share in GDP, we have been observing stagnation since 2008 – PIE pointed out.

The variety offered by video games never ceases to amaze him. He loves OutRun's drifting as well as the contemplative walks of Dear Esther. Immersing himself in other worlds is an incomparable feeling for him: he understood it by playing for the first time in Shenmue.
Previous What’s missing in Battlefield 2042? The fan created the list • Eurogamer.pl
Next UEFA Champions League. Robert Lewandowski as Klaus Fischer. Bayern monachium