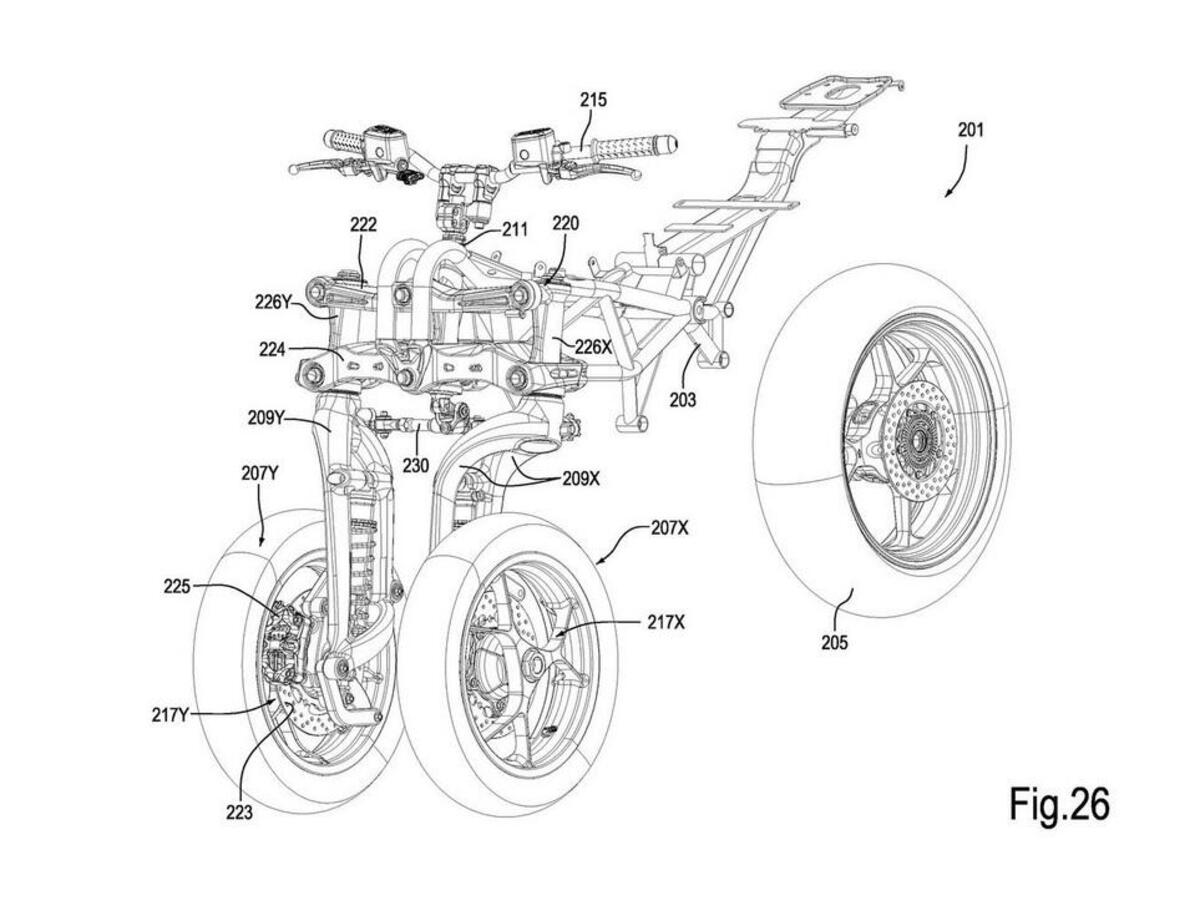 Here we go again: another solution that retires the fork – News

The Piaggio Group files a patent for an alternative front suspension

C.There are many reasons that can lead to the abandonment of the family member telescopic fork front suspension. But if none of these have so far received the same universal diffusion, there will probably be a reason. The telescopic fork in fact meets a whole series of requirements that are not easy to find all together in a damping / steering mechanism: it is simple, it is effective, it binds well with the dynamics of the bike, it is relatively cheap to produce and, among many things, is today a fully tested and explored technology.

Andcceptions? Many, many start from Norman Hossack’s patent: the BMW Telelever and Duolever for example work very well, the front suspension of the Honda GL 1800 Gold Wing with articulated wishbone, not to mention the Bimota Tesi from the early 1980s (system taken from the current Thesis H2) and the subsequent and unforgotten one Yamaha GTS with Omega frame and single-sided front, but the writer also likes to remember the genius Britten V1000. All solutions that try to remedy some of the fork limitssuch as the variation of the trail and wheelbase during braking, the stiffness that cannot be differentiated in the lateral direction given the circular section of the rods and compromising the full effectiveness of the damping function when the load transfer occurs.

THE R&D departments of the houses are constantly developing alternative solutions that are often patented but which do not always have a direct impact on production, however there is also another area where “alternative” front suspensions can have and have some more possibilities to be adopted: in three-wheeled vehiclessegment where the Piaggio Group has been present for many years with his MP3 which has been very successful in sales in Europe.

And it is precisely from the Pontedera Group that these drawings accompanying the patent application of a front suspension that incorporates the articulation system devised in the 19th century by James Watt (also Scottish like Hossack).

The system is not new in the automotive field but it is probably the first time that it appears in an application on the front suspension of a motorcycle and in the drawings presented by Piaggio it is applied through a single shock absorber with a series of additional links that would limit the intrinsic “non-straightness” of the motion of the wheel pin inherent in Watt’s mechanism to negligible values.

It is a solution reminiscent of the one used on Vespas, but in this case the resulting movement would be more similar to that of a conventional telescopic fork with respect to which it could have a flexibility and stiffness more easily controlled in the transverse and longitudinal direction, as well as a different one. management ofanti-dive effect.

Remembering that patents do not always translate into industrial solutions and that it is even more rare that they become so by respecting the application shown in the patent drawings, to what means could this front suspension be applied by Piaggio? Certainly to a scooter like the Beverly, in which it could offer even better control of the driving dynamics, but we believe that such a suspension can – conditionally obligatory – be used in that hypothetical three-wheeled motorcycle that the Piaggio Group is thought to be developing.

The variety offered by video games never ceases to amaze him. He loves OutRun's drifting as well as the contemplative walks of Dear Esther. Immersing himself in other worlds is an incomparable feeling for him: he understood it by playing for the first time in Shenmue.
Previous announced the games of the second half of August 2022
Next visits, signs and immediately Lazio