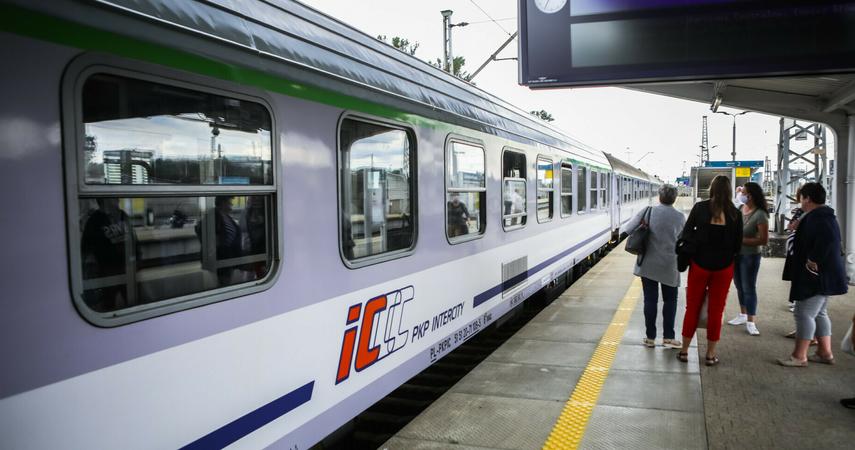 It was not so bad on the Polish railways for a long time? You can think of this when you see the amount of contractual penalties imposed by the Ministry of Infrastructure on the PKP Intercity company, which carries out long-distance rail connections. The amount of penalties for the first eight months of this year is seven times higher than in the whole of last year, according to the ministry’s response to the interpellation of MP Paulina Matysiak. “These numbers are shocking,” the deputy tells us. – The difference in the amount of contractual penalties is the result of a significant increase in the level of penalties, there are fewer irregularities – replies PKP Intercity.

A month ago, Paulina Matysiak, MP from the Left Together and head of the parliamentary team for combating transport exclusion, addressed an interpellation to the Minister of Infrastructure a month ago. It concerned the fulfillment of the terms of the agreement by the PKP Intercity company regarding the implementation of connections subsidized by the ministry. This year, the subsidy for PKP Intercity for rail transport amounted to PLN 861. Next year it will be PLN 1.197bn.

Matysiak wrote in the interpellation that “in the case of subsidized transport, the organizer specifies, among others, the conditions regarding the number of connections, operating hours, tolls” and “also specifies the required quality of services (comfort, punctuality, equipment, etc.), and in the event of failure to meet of the expected parameters, the contractor is charged with contractual penalties “. The MP also asked whether the ministry applied to the railway company for compensation in 2016-2021.

“The Ministry of Infrastructure monitors and controls the performance of the contract by PKP Intercity on an ongoing basis. Pursuant to the provisions of the agreement, the company is obliged to submit monthly and quarterly reports. In addition, the Ministry carries out inspections covering the scope and quality of services provided, punctuality of transport and the correctness of documentation related to the implementation and settlement of the contract, “Andrzej Bittel, Secretary of State in the Ministry of Infrastructure, wrote in response to an interpellation. Wiktor Misztal, social assistant of MP Matysiak, wrote in response to an interpellation.

Minister Bittel reminded that the Ministry of Infrastructure imposes contractual penalties on PKP Intercity for failure to maintain the quality of services provided under the provisions of the PSC agreement. This year they are record-breaking – PLN 16 million has already been fined for the period from January to August. In the previous five years, the penalties were much lower – in 2016 it was PLN 13.7 million, in 2017 – PLN 3.2 million, in 2018 – PLN 3.8 million, in 2019 – PLN 5.7 million, and in 2020 when the pandemic reduced train traffic – PLN 2.2 million.

– These numbers, of course, are shocking. The penalty for eight months of this year is greater than the highest annual penalty in the last five years. The quality of PKP Intercity travel is definitely down, the trains do not run on time. The carrier should consider what standard it offers to current passengers and what standard it can offer to those who do not yet use railways – says Paulina Matysiak in an interview with Business Insider Polska.

PKP Intercity: a higher level of fines in the new agreement

The press office of PKP Intercity informs Business Insider Polska that “the difference in the amount of contractual penalties charged to PKP Intercity by the Ministry of Infrastructure in 2021 compared to previous years is the result of a significant increase in the level of penalties for individual items under the new ten-year PSC “.

“The number of cases of irregularities in the services provided has not increased, in fact there are fewer such situations, but the carrier incurs higher costs in this respect” – convinces the carrier.

Failure to provide assistance to a disabled person may cost the carrier as much as PLN 111.6 thousand. zloty. 44.2 thous. PLN fine is charged for canceling a train without substitute transport. Other penalties are lower. From 6 to 9 thousand PLN can be charged for overcrowding the train, and 6,000 PLN, when the composition is not compiled in accordance with the contract. Less penalties, amounting to 2.2 thousand. PLN, relate to non-compliance with comfort requirements, e.g. light or heating.

The Ministry of Infrastructure may impose penalties after the inspection in a given train or description of the fact in the report. After a passenger’s complaint, only a fine may be imposed for failure to provide assistance to a disabled person.

– Delays are a pain in the railroad. Something about traveling by train discourages both current and future passengers. After all, punctuality is crucial. We choose transport that will arrive faster and, above all, arrive on time – says Paulina Matysiak.

– I have a feeling that passengers are able to understand that sometimes there are delays, there are random situations, there are tragedies on the tracks, you have to wait for the prosecutor’s arrival. However, it must be made clear that in many places trains are almost always delayed. This is what happens at the Poznań Główny station. It seems to me that passengers traveling from these stations are delayed by the time of their journey from the start, adds the deputy.

The third quarter of this year was the worst in years in terms of rail delays. According to data from the Office of Rail Transport, during this period only 66.1 percent PKP Intercity warehouses arrived on time (it was a result 12 percent worse than in the second quarter of this year). The worst was in July – then only 62 percent. the warehouses were on time. Officials consider a train delayed at least six minutes late as running late.

PKP Intercity informs that “more and more often the punctuality of trains, which was indicated in the last report of the punctuality of the Railway Transport Office, is influenced, among others, by: rolling stock and communication failures, but also factors beyond the carrier’s control “. By the term “communication” railwaymen understand making it possible for passengers to continue their journey on another train after a change. In short, one delay may generate another.

As for the last-mentioned reason, we are talking about difficult weather conditions, resulting in e.g. damage to rolling stock, overhead contact line or obstacles on the tracks (fallen trees), which require the display of replacement trains.

“Only from the beginning of 2021, the number of events affecting the movement of PKP Intercity trains caused by lightning or heavy rainfall amounted to nearly 1180 cases, while in 2019 there were two times less such events ” – says the carrier.

On the other hand, in the case of non-compliant train combinations “the amount of the penalties was higher than in previous years, because from the beginning of this year the penalties are imposed for each wagon, not the train, as before”.

“However the number of inconsistent composition combinations in January-August this year. fell by 14 percent. compared to the same period of 2019 The main reason for the wrong combinations of trains was the necessity to change the combined train to a classic wagon train, which, for example, lacked a gastronomic wagon. This necessity results from technical faults that cannot be foreseen in time as well events and collisions on the railway network, beyond the fault of the carrier ” – convinces the carrier.

– For passengers, travel comfort is more and more important: the ability to eat a meal (not all routes include restaurant cars), air-conditioned compartments, the ability to charge the phone, or something that should be a standard, i.e. clean and working toilets. Even the latter is sometimes a problem, it is enough to recall IC Witkacy, who at the end of June this year covered the Zakopane-Gdynia route with all toilets closed – says Matysiak.

The variety offered by video games never ceases to amaze him. He loves OutRun's drifting as well as the contemplative walks of Dear Esther. Immersing himself in other worlds is an incomparable feeling for him: he understood it by playing for the first time in Shenmue.
Previous Russian army on the border with Ukraine. It is also gaining strength in Belarus
Next Slovakia. The government introduced a state of emergency for 90 days. “We have to unite. The situation is serious”