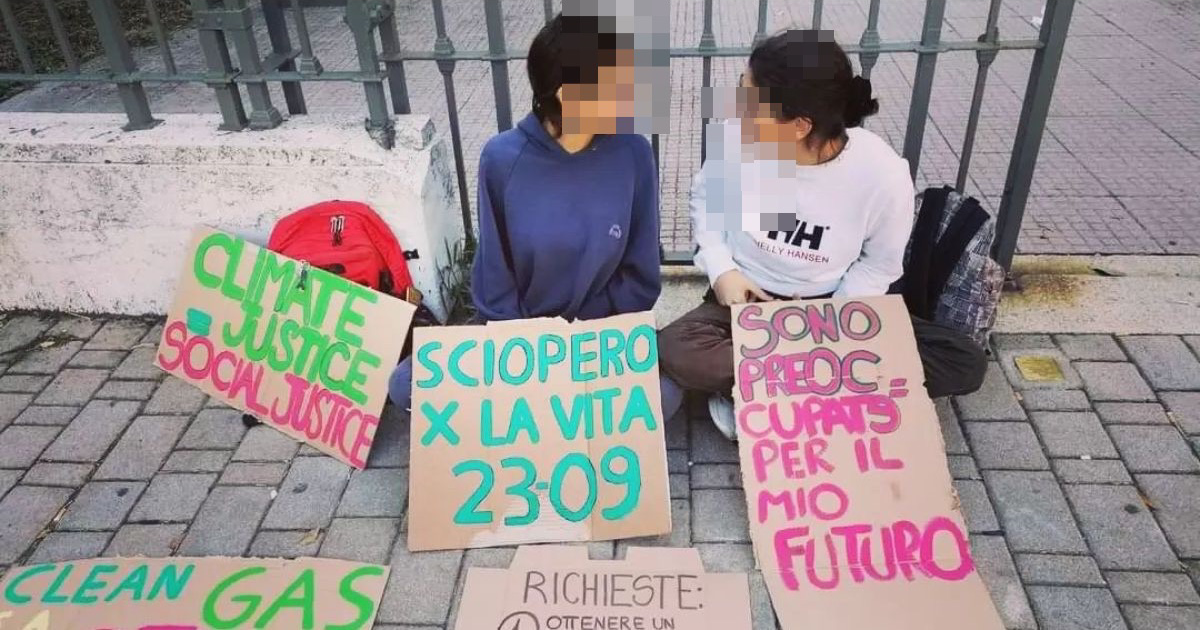 Bring in Preccint for a peaceful sit-in for the climate in front of the school. It happened to Voghera: Sabina and Anna, both activists 17 year olds of the local group of Fridays for futurethey sat in front of the entrance to the Grattoni classical high school with signs, which raised awareness of the global strike of 23 September – the first in the city -, but above all they denounced the building situation of the institute. After about two hours Digos agents they identified them and took them to the police station. More precisely, they wrote on the social networks of Fridays for Future by Voghera, the two girls who decided to go on strike and three other students who were to bring their support were taken to the police station. Three “(although only two were the promoters of the strike) received a dispute for unannounced event“. “But we are very calm, the complaints will almost certainly be closed very soon”Says Anna, one of the two young women. However, there is also a certain disappointment for the results of the protest: “The thing that makes me most angry is that probably the reports came from one or more people in the school – adds Sabina – It is sad that two students worried about the future of their generation are treated like this “.

Fridays for Future, on September 23, strike in the streets: “Party campaigns too short, measures against the climate crisis are missing”

The action started early, at 7:30 am on Monday 20 September. “We sat in front of the entrance to the school, leaving the passage free – explains Sabina – We wanted to ask for a space for self-managed meetings on climate and an energy efficiency plan for our high school, given that in the past few months we have had several problems with heating ”. According to various students’ testimonies, the Grattoni methane boiler is old and does not allow the temperature to be adjusted. Indeed, since the beginning of the year some students have been taken away by ambulance due to the heat, he explains Alberto Suescun25, also part of Fridays Voghera and, together with two other girls, of the “sit-in support team, with water and brioches”. At first the protest “was working. Of course, there was no lack of motorists who yelled at us to go to study or work, instead of skipping classes. But we were able to talk to the professors and many classmates – continues Sabina – See a girl of your age who stays sitting outside and not entering the classroom it makes a bit of an impression on you ”.

At about 8:15 am, at the end of the students’ entrance time, the first complaints began: “The deputy headmaster told us in bright tones to move and stand at the side of the door. He told us that he would not call the carabinieri but that he could do it ”. After several negotiations, the young women accepted. “We got attached to the gate without disturbing anyone – says Suescun – There were no megaphones, we did not have particular choirs. So at the level of disturbance of the public peace there was nothing ”. The demonstration was rather limited: “There were only two girls doing what Greta did, standing still with a sign”. After an hour, however, the first police check arrived. “They asked all the documents but they were very calm. They told us they were obliged to do so ”continues Sabina. The agents returned two more times. “At the third they told us they had received too many reports and had to take us to the police station. Once there Anna and I and a support girl, Gaia, who was of age, were sued for occupation of public land without notice and the parents had to come and sign. But I was lucky – says Sabina – my parents understood me ”. The other two activists, on the other hand, were able to return home without consequences. “You bothered me a lot – comments Anna – that another person also had to pay the consequences”.

On returning to school, the next day, there were consequences, both positive and negative: “Several classmates asked us what had happened. With the math teacher I also had a discussion on the concept of civil disobedience – says Sabina – From others there were only crooked glances or indifference ”. Voghera “is not used to any kind of expression of opinion by young people – adds Suescun – for years the political life of people of my age has been zero. This is why there is so much intolerance. But a case like this is funny, where we had a councilor like Adriatici “, she concludes in reference to the case of the Northern League councilor who killed the 39-year-old in the square on 21 July 2021 Youns El Boussettauoi.

The two young women also received solidarity from some members of the Italian Left: “We strongly condemn the use of these methods by both the institute and the police,” he commented in a note Tino Magniunion manager and candidate for the Senate for the Lombardy 2.

Videogames entered his life in the late '80s, at the time of the first meeting with Super Mario Bros, and even today they make it a permanent part, after almost 30 years. Pros and defects: he manages to finish Super Mario Bros in less than 5 minutes but he has never finished Final Fight with a credit ... he's still trying.
Previous Leao: ‘The first two years at Milan were difficult, Pioli and Ibra were decisive’. On the future: ‘I want to exploit all opportunities’ | First page
Next celebrity moccasins and how to wear them