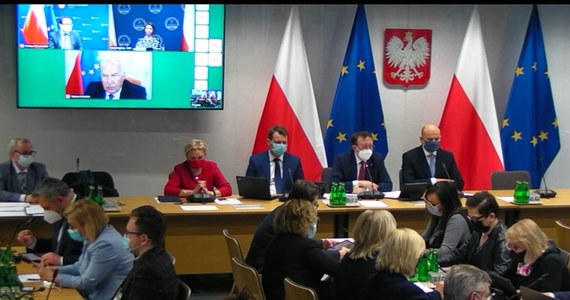 Inflation. MEPs ask the minister of finance and the deputy president of the NBP

Thanks to the votes of the opposition, the social side (entrepreneurs, employees) will be able to take the floor during the sessions of the parliamentary finance and economy committees. The subject of the meeting? Inflation and “the rapidly growing prices and costs of living for Polish families, as well as the effects of the Polish Order in the activities of entrepreneurs”. The questions are answered by representatives of the government and the NBP.

Meeting of the Public Finance Committee and the Economy and Development Committee with the participation of representatives of the government and @ nbppl. LIVE → https://t.co/TMN2mj3lJ2 pic.twitter.com/wgMs3aBPzL
– Sejm of the Republic of Poland (@KancelariaSejmu)
January 11, 2022

At the beginning of the Tuesday meeting, there were doubts as to whether or not the social side (entrepreneurs, employers, employees) could speak, whether or not they had been invited to the discussion. – We want to talk about people’s problems – said Izabela Leszczyna at the beginning of the meeting. During the vote, it was decided that the social side would be able to speak in the discussion.

It’s nice to win votes! ✌️Even if they concern “only” the voting (sic) of representatives of entrepreneurs at the committee meeting devoted to #drożyznaPiS (#PiS Members were against) pic.twitter.com/T8QiLJoqeE
– Iza Leszczyna✌️ (@Leszczyna)
January 11, 2022

Before the invited guests (from the Ministry of Finance, the National Bank of Poland and the Ministry of Regional Development) could comment on the current level of inflation – first, the deputies described the problem of rising prices.

They recalled that before the pandemic, the risk of deflation, not high inflation, was discussed in Poland. – 4.6% before the pandemic – it was the highest inflation in Europe. Where did it come from and where is it coming from? From the fact that you have based economic growth on consumption. A decline in the investment rate, investment collapse, in fact. Against the announcement of 25% share of investments in GDP, we have 17 percent. to GDP – said one of the participants of the commission.

The arguments for rising inflation also included additional tax burdens for entrepreneurs. – Playing for the weakening of the zloty in order to generate a profit and fund the state budget; inconsistent communication policy of the NBP, belated reactions. For the first time in many years, the savings rate of Poles has fallen – continued the MP, who pointed out that inflation “raises” nominal GDP. – The current level of inflation is influenced by many factors, we are aware of that – he added.

In the Sejm, during the meeting of the joint Public Finance and Economy and Development Committees, a discussion on inflation and “the rapidly growing prices and costs of living for Polish families, as well as the effects of the Polish Deal in the activities of entrepreneurs” is scheduled for today.

Inflation – according to a quick estimate of the Central Statistical Office – amounted to 8.6 percent in December. The average annual inflation in 2021 was thus over 5%. The forecasts for the coming months are not very optimistic: economists do not rule out a double-digit price growth dynamics, and the average annual inflation in 2022 may amount to approx. 7-8%.
Tadeusz Kościński, the minister of finance, said during the committee meeting that “inflation readings are high, but it is not, as some say, that it results from ineffective actions of the government or the central bank”.

– Inflation in Poland is largely caused by external factors: high prices of raw materials, broken supply chains. Inflation is a global problem. The vast majority of analysts perceive such high inflation readings as a temporary phenomenon. The high dynamics of prices is the effect of Poland’s success in fighting the pandemic. This is the price for the high dynamics of the economic rebound after the first wave of the pandemic, and the government is trying to mitigate the effects of high inflation – emphasized the Minister of Finance.

Marta Kightley, deputy president of the NBP, noted that increased inflation is one of the greatest challenges for the global economy.

– The wave of economic recovery is accompanied by an increase in energy prices. In the US, CPI inflation in November amounted to 6.8%. y / y is at a level not recorded for decades. In the euro area, inflation reached 5%. – which is the highest reading ever. In December 2021, gas prices in Europe were six times higher than a year earlier, said Kightley.

She added that oil and coal prices were also higher on an annual basis. – The rise in energy commodity prices is accompanied by rising prices of CO2 allowances – she noted. – The increase in the prices of raw materials, which has been sustained for several months, makes entrepreneurs try to maintain margins by increasing the prices of end products. Marginal goods prices reflect the effects of disruptions in international transport. As a result, the leading central banks clearly raised their inflation forecasts. This applies, inter alia, to The ECB and the Fed, she noted.

The NBP deputy president noted that the situation of employees in the domestic labor market remained good. – High price growth is likely to continue in 2022. This will result from high energy prices. In the short term, inflation will be curbed by the reduction of taxes as part of the government’s anti-inflationary shield – temporarily even by 3.4 percentage points. In annual terms, inflation in 2022 should be 1.5 percentage point lower. Let me remind you that since October the NBP raised interest rates four times. These actions are implemented carefully so that the monetary policy adjustment does not generate too high social costs – added Kightley.

Kightley also referred to the increased inflation at the beginning of 2020. – There was a significant downturn in the economy in Germany, which would also cause a downturn in Poland. A pandemic broke out in March 2020 and this caused a huge economic crisis. Poland reacted with increased fiscal spending, and an anti-crisis shield was introduced to avoid a large increase in unemployment. In addition to the anti-crisis shield, the NBP reacted by introducing other measures in addition to lowering interest rates. Our reaction does not differ from that of other countries in the world. This saved the world’s economies from the Great Depression. If the governments had not reacted, we would have had a huge crisis accompanied by deflation, she explained.

The NBP deputy president also commented on the NBP intervention at the end of 2020 – It was in line with the monetary policy pursued by the NBP. We wanted to maintain mild monetary conditions, because that was what the economy required, she added. Commenting on the savings rate of Poles, Kightley recalled that in 2019 it was below 4%, and for 2021 it is still about 6%. “It’s very elevated compared to the pre-pandemic period,” she said. She also stressed that it is a standard not to publish the interest rate growth path. And investments – she added – 9.3 percent. for Q3, in Q4 they will amount to over 11%. – Our actions are aimed at bringing inflation down to the target in the medium term, at the end of 2023 to the band of deviations from the target (2.5% with a deviation up or down by 1 percentage point – ed.) – said the vice-president of the NBP.

The variety offered by video games never ceases to amaze him. He loves OutRun's drifting as well as the contemplative walks of Dear Esther. Immersing himself in other worlds is an incomparable feeling for him: he understood it by playing for the first time in Shenmue.
Previous Xiaomi patents a phone with a full-screen finger reader
Next Ski Jumping. Noriaki Kasai right behind the HBC Cup podium