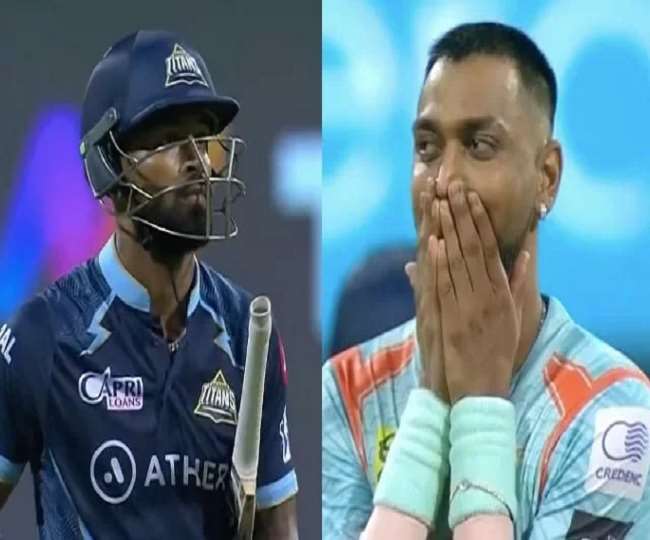 IPL 2022 Krunal sent Hardik Pandya to the pavilion by getting caught at long on by Manish Pandey on the very first ball of the 11th over. After the dismissal of Hardik Pandya, Krunal Pandya did not celebrate and was only seen pressing his mouth with both hands.

New Delhi, Online Desk. In the fourth league match of IPL 2022, this time the two new teams, Gujarat Titans and Lucknow Super Giants, faced each other. In this match, Gujarat led by Hardik Pandya managed to beat the Lucknow team led by KL Rahul by 5 wickets. Lucknow batted first and scored 158 for 6 in 20 overs on the back of half-centuries from Deepak Hooda (55 runs) and Ayush Badoni (54 runs). Gujarat had got a target of 159 runs to win, which this team achieved by making 161 runs for 5 wickets in 19.4 overs.

In this match, while Hardik Pandya was captaining Gujarat, his brother Krunal Pandya was representing Lucknow Super Giants as an all-rounder. In the first innings, Krunal played an unbeaten 21 runs in 13 balls with the help of 3 fours, while in the second innings he took one wicket for 17 runs in 4 overs. The one success that Krunal got was in the form of his brother Hardik Pandya.

Hardik Pandya came out to bat at the fourth order against Lucknow when his team lost two wickets for 15 runs. Hardik Pandya started batting in his own style as soon as he arrived. Hardik Pandya scored 33 runs in 28 balls with the help of one six and five fours. Then KL Rahul gave the ball to Krunal Pandya to bowl the 11th over in the second innings. On the very first ball of the 11th over, Krunal sent Hardik Pandya to the pavilion by getting caught at long on by Manish Pandey. After the dismissal of Hardik Pandya, Krunal Pandya did not celebrate and was only seen pressing his mouth with both hands.

Videogames entered his life in the late '80s, at the time of the first meeting with Super Mario Bros, and even today they make it a permanent part, after almost 30 years. Pros and defects: he manages to finish Super Mario Bros in less than 5 minutes but he has never finished Final Fight with a credit ... he's still trying.
Previous Penelope Cruz: 5 2000s looks to copy right away
Next announced dates and prices for other countries in the world

Origi, first shots towards a season as a potential protagonist

Massimiliano Allegri answers the questions of Dazn’s colleagues. Here are his words: Updates …