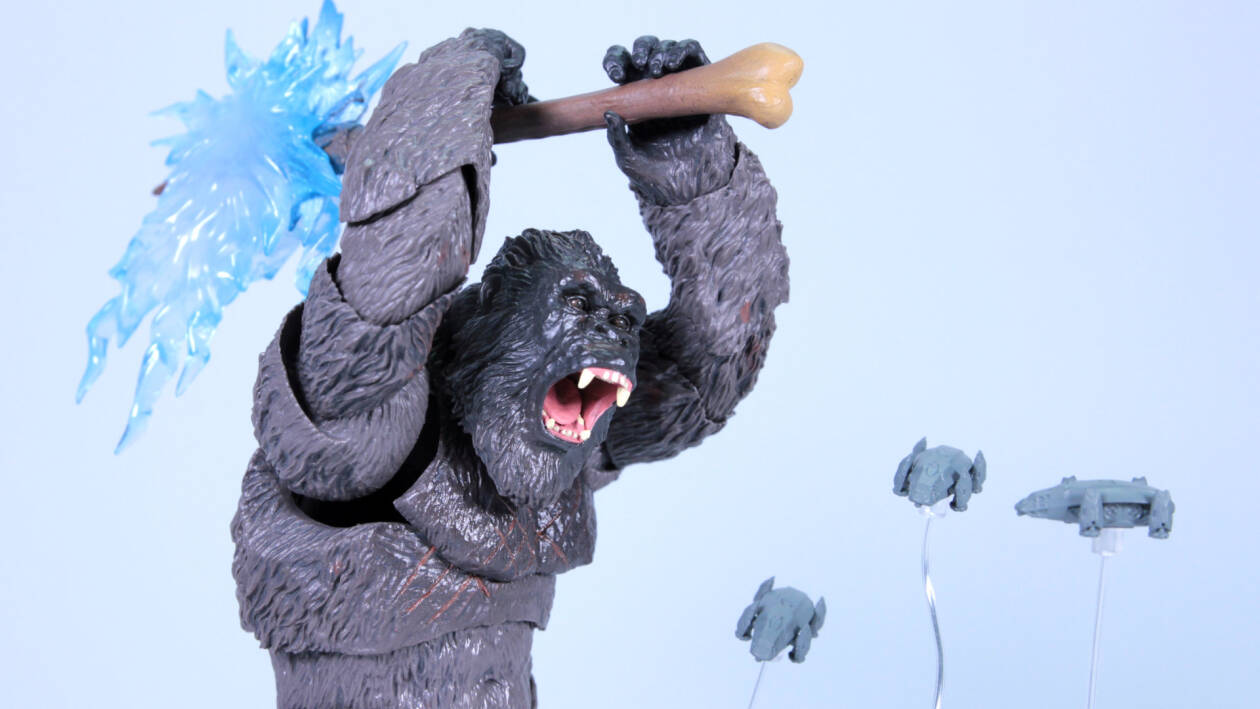 After introducing you to some of Dragon Ball’s exclusive action figures Bandai present at the new edition Lucca Comics and Games 2022, today we propose the analysis of another collector’s item, this time inspired by the world of cinema. For the line SH Monsterartslet’s find out all the details of Kong Bandai Event Exclusivethe figure taken from the feature film Godzilla vs Kong of 2021.

Kong – The character from the movie Godzilla vs. Kong

Godzilla vs. Kong is the sequel to the films Kong: Skull Island (2017) and Godzilla II – King of the Monsters (2019). The film is directed by the name of Adam Wingard and the cast includes Alexander Skarsgård, Millie Bobby Brown, Rebecca Hall, Brian Tyree Henry, Shun Oguri, Eiza González, Julian Dennison, Kyle Chandler and Demián Bichir. The film takes the viewer into a world made up of men and monsters. The latter are being studied and that is why a risky mission to discover the origins of the Titans begins. In the meantime, however, on the island of Skull, Godzilla and Kong are intent on decreeing which of them is the undisputed King of the Monsters. Who will get the better of the two? Will men be able to have a peaceful future?

As usual, let’s start our analysis starting from the packaging. Also in this case, like the other Bandai exclusives coming to Lucca Comics and Games 2022, we are faced with the typical design made of bright colors in stark contrast to the black background. The box is always in light cardboard and, unlike other similar proposals, this time the transparent window is not placed in the front part of the box but in the back one. Instead, on the front we find a captivating graphics with the two protagonists of the 2021 film from which the product takes inspiration. Finally, present the trademark beforehand Bandaithe holographic stamp which certifies the originality of the product, the logo Tamashii Nations and the event exclusive logo.

Once the package is opened, the entire contents are well housed and protected inside a large transparent blister. As always, we also find an illustrative leaflet with instructions for replacing the interchangeable parts.

Once the package is opened we can immediately admire all the contents placed inside it. From a first glance it is easy to understand how this figure lends itself very well to being exposed both in static pose and in action pose. In addition to the figures, in fact, the box has two other heads with different expressions, some hands with different openings, a head of the Mecha Godzilla, a weapon with an effect and three small planes with lots of support.

As for the dimensions, this new proposal dedicated to the character of Kong it is compact and excellent for display even in small spaces. The figure is very solid to the touch and the perception that one has once held in the hands is that of an extremely posable and well balanced product, thanks also to its intrinsic physical conformation. The confirmation of all this comes already from the frontal static pose, which is firm and free of any uncertainty. The joints in the joints are strong and able to keep the figure standing without any kind of problem.

Although we expected such a result, what particularly surprised us is the great stability of the character even in the action poses. Thanks to the presence of large feet, Kong can be exhibited in the collection in dynamic poses without any delay. Inside the package there is no exhibition standbut in all honesty we didn’t miss it in the slightest.

The sculpt and the coloring

As for the sculpt, Kong is well made and on the whole body it is possible to appreciate his typical coat. Even his heads leave no room for negative comments, with a note of merit for the face that depicts Kong intent on an attack, certainly the best of the trio.

The painting, although difficult to achieve for a figure of this size, is congruous and is able to give depth and movement to the whole. Among the details we also find a series of wounds on Kong’s chest, recovering from an aggressive fight. Last but not least, we point out that the inside of Kong’s mouth is also painted, in stark contrast to his ferocious white jaws.

Inside the package, in addition to the additional heads and hands, we found three great accessories to reproduce the action scenes. The first is an ax with a lot of effect, which can be gripped with the help of a pair of dedicated hands, the second is a mini diorama depicting three airplanes in flight, while the third is the head depicting the Mechagodzilla.

The ax is aesthetically very beautiful, even if the montage of the effect is not very stable. The second accessory is a real gem, as it can be used in combination with the weapon to simulate a real fight. Furthermore, we inform you that the small support used to support the planes is made through the use of wires with a flexible core, these allow you to position all the individual planes as you see fit and thus give the right dynamism to the whole.

Finally, the head of the Mechagodzilla is also very well made, which can be wielded by a Kong on a rampage!

The conclusions on the Kong Bandai Event Exclusive figure

To conclude, this new Bandai proposal for the SH Monsterarts line has basically no technical problems such as stability, scuplt and coloring. The presence of the interesting accessories leads the user to the possibility of a great experience in the game phase or exhibition. A transparent stand is missing, but it is not absolutely necessary. Kong is strong and can easily be placed in even the most action poses. Among the accessories we point out that the small diorama dedicated to fighter planes is a real gem. If you are a fan of the franchise, and have always wanted a Kong in the collection as well, this new proposal may be for you.

We remind you, however, that the figure is an exclusive event, therefore Games 2022 can also be purchased during the dates of Lucca Comics.

David Martin is the lead editor for Spark Chronicles. David has been working as a freelance journalist.
Previous tour bus crashes into cars and scooters. Several wounded
Next Dried fruit, what a passion, all the benefits for our health: “Impossible to resist”

TV series Only Murders in the Building 2, the cast of the tv series Less …