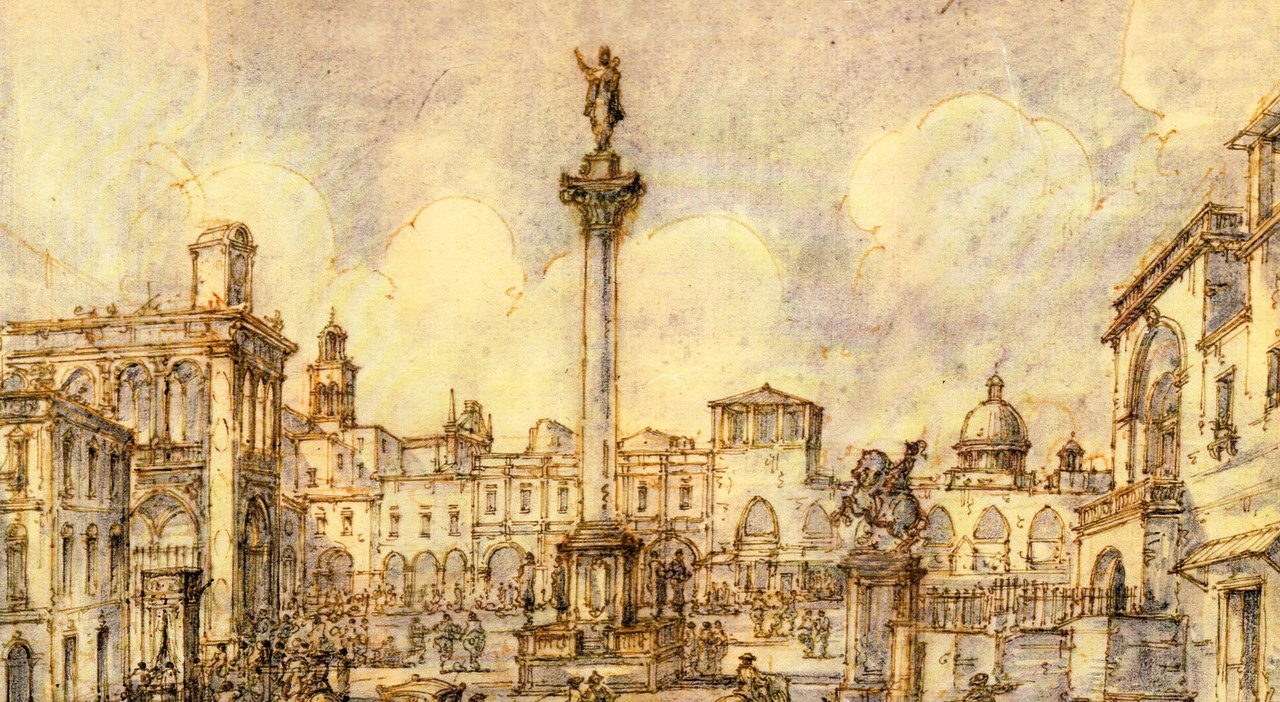 Lecce, piazza Sant’Oronzo in the 1700s conquers travelers. Here’s what it was like

There are horses and carriages passing by and groups of citizens walking and arguing. To act as a frame, the Seat and the column which stands in the center of a square different from the current one, but over which the patron saint of the city watches over. A Lecce unpublished told through the drawings of the travelers of Eighteenth-century Grand Tour.

Precisely in the days when the debate about the realization of the copy of the statue Of Sant’Oronzowith the campaign launched by Quotidiano to accelerate the return to the square of the patron saint, whose simulacrum has been missing for three years, from the past here is a testimony of the transformations of the city.

The important contribution comes from the Salento publisher Mario Congedo. “I followed the battle of Quotidiano for the return of the statue of Sant’Oronzo to its original position on the terminal column of the Via Appia – he explains – the return communicated thanks to the intervention of the Banca Popolare Pugliese covers a deeply felt void. This is why I feel like sharing a series of works that tell about our city, and are a testimony of absolute value to our past ».

While waiting to see the patron saint at the top of the Oval (not the original but a copy that will be made thanks to the financing of the bank and probably other sponsors for a total of 170 thousand euros), the publisher offers some images historical portraits a square never seen beforeand different from the current one.
The only recognizable point is the monument of the saint.

Lecce, BPP will cover half of the 170 thousand euros for the copy: Sant’Oronzo will be able to go back on the column

«This is an extraordinary document from Piazza Sant’Oronzo which I recovered in Paris about forty years ago – says Congedo – this work is due to Jean Louis Despreza Parisian engraver of European fame, and was born from a sketch currently preserved at Stockholm National Museum. From this sketch, the artist returning to Naples proceeded to create the preparatory drawing for inclusion in the “Voyage pittoresque dans le Royaume de Naples“Of the abbot Richard de Saint Noncreator and coordinator of the gigantic work in five large volumes, notoriously considered the most important publication of the French eighteenth century, full of hundreds of etchings of extraordinary documentary value from all over the Kingdom of Naples“.

Lecce, a 170,000 euro “copy” for Sant’Oronzo. Art Bonus with banks and companies

Among the sketches made by the leading artists of the Grand Tours of Italy, and who crossed the South and the Puglia between April and May 1778, there are also those who immortalize the Salento capital. Two images brought to light: the first is a preparatory drawing in pen and brown ink, gray lavis; the second is a sepia-colored sketch of the square. Both almost certainly performed by the artist Jean Louis Desprez.

Lecce, Sant’Oronzo will return to the column in the square. But it is a copy

But not everyone liked the Baroque

«The Salento Baroque did not succeed in enthusing Vivant Denonpainter in charge of organizing a trip to explore the ancient places of Magna Graecia, who in fact arrived in Lecce, one of the most beautiful cities in the Kingdom of Naples, wanted to leave immediately – explains the publisher – while the artist Jean Louis Desprez he used the hours in which he was visiting Lecce to carry out numerous drawings of the city. Denon decided not to allocate these views to a further elaboration to be included in the volume, so only one illustration, however generic, is dedicated to the Baroque city. However, it should be noted that of the numerous sketches on Lecce, some of which are kept in Stockholm, others in a private collection, we have received several versions, some transformed into illustrative drawings ».

Mario Congedo, therefore, also hopes that the statue will be able to return to its original location. And in the next few days there should be a turning point. Mayor Carlo Salvemini announced that the Municipality is ready to launch the process ofArt Bonus, approving a resolution of address by the council. The starting point is Bpp’s support initiative which will be followed by an appeal to citizens for popular support.

David Martin is the lead editor for Spark Chronicles. David has been working as a freelance journalist.
Previous “We must do everything possible for the refugees”
Next The 5 actresses nominated for Best protagonist at the 2022 Oscars