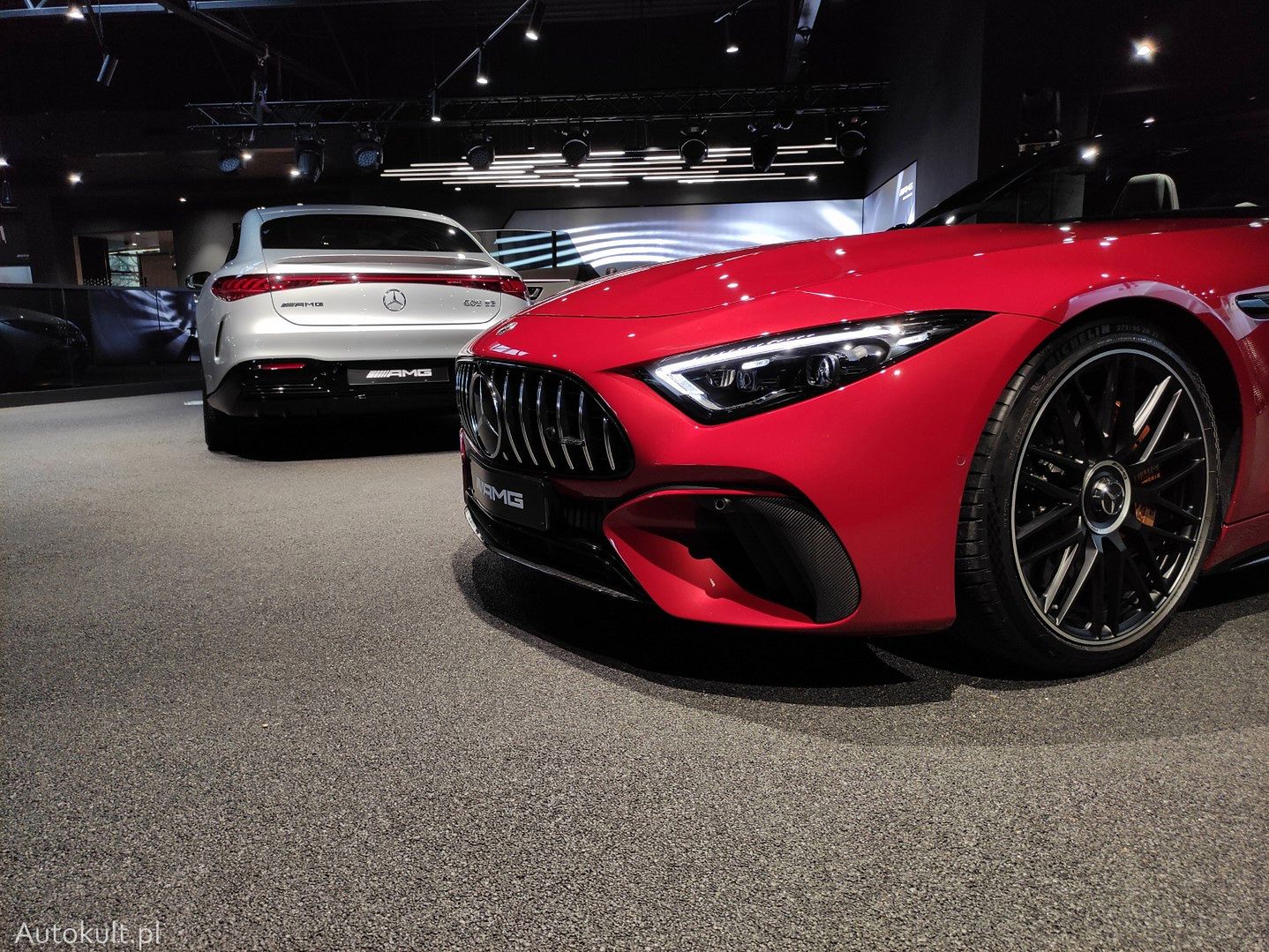 Mercedes-AMG SL 63 and EQS 53 already in Poland. They make an even greater impression live

The Gdańsk AMG Brand Center is the first such facility in Europe and the fifth in the world. This is not a coincidence because Poland is one of the most important markets for sports Mercedes. Interestingly, the most popular is not the cheapest A-Class, but something on the other end of the & hairsp; – & hairsp; G 63 scale. Now the range is joined by two more proposals, one of which is another incarnation of the iconic SL roadster, and the second the first fully electric a model bearing the AMG logo.

Let’s start with the SL 63 AMG because it is he of the two who is an absolute novelty, while the EQS 53 is simply a more powerful version of an existing model. So what’s the new Live SL? Above all very neat and proportionate. This is a nice change from the visually rather heavy predecessor, which was … smaller.

The new incarnation is 4,705 mm long, 1,915 mm wide and 1,359 mm high. That’s 88 mm, 38 mm and 44 mm more, respectively. The & hairsp; – & hairsp; wheelbase has also increased to 2700 mm, which allowed to find space for additional seats. However, if you have legs, you are unlikely to fit in there. The brand representatives themselves point out that these are rather children’s seats.

There is a lot of space in the front, as befits a luxury roadster. In terms of space and equipment, it is actually the S-Class with the same vertical MBUX screen. The round air vents, which together with the Alcantara and stylish stitching give a sporty character are completely different.

Larger dimensions and proportional shapes go hand in hand with impressive technical features. SL 63 is a completely new, aluminum and steel structure, which has nothing to do with the predecessor or brother AMG GT Roadster. It boasts an impressive 18% torsional & hairsp; – & hairsp; stiffness. greater than in the predecessor and 50 percent. greater than the AMG GT Roadster. And this despite the use of an elegant, soft roof.

It can be folded / unfolded with a button. The whole process takes 15 seconds and can also be performed while driving, as long as we do not exceed 60 km / h. Importantly, the mechanism is lighter than its predecessor’s hardtop. However, do not count on spectacular results – The SL still weighs as much as 1,970 kg.

Technologies at the service of performance

All the technical innovations, and there are many of them here, are unfortunately not from the air, although where possible, Mercedes used lightweight carbon fiber. Among other things, in the elements of active aerodynamics at the front, in the form of a small, extendable pressure plate. There is also a huge rear spoiler with the possibility of setting up to 5 different angles.

We will also find on board swivel rear wheel system, hydraulic tilt stabilization, front axle clearance system and high-performance brakes with ceramic discs. They’ll come in handy because it’s a really fast car. Under the hood we find the well-known double-supercharged V8 it generates 585 PS of power and 800 Nm of maximum torque. This, in combination with the 9-speed automatic and the standard 4MATIC all-wheel drive (new in this model), allows to a hundred in 3.6 seconds and accelerate up to 315 km / h.

Interestingly, the manufacturer does not rule out an even more powerful, hybrid release. It is also worth mentioning the weaker 55 4Matic + – with the same engine throttled up to 476 KM. The new SL is expected to go into production in the first quarter of 2022, and the we will see him on the roads around May. Prices remain unknown so far.

The second novelty from AMG, which came to Polish soil, is the EQS 53. Its weaker versions are already known to us. The new, most powerful, however, deserves special attention. Mainly because it is supposed to combine luxury, performance and ecology in one. This is the first all-electric car from Affalterbach only seemingly not much different from an ordinary EQS. Pay attention to the details.

Among them, completely new, sharply styled bumpers, a revised kidney grille and 22-inch rims with the formula reserved for this variant. The most important thing, however, is what cannot be seen & hairsp; – & hairsp; namely two electric motors, one for each axle.

Together they generate 658 HP of power and 950 Nm of maximum torque. Little? The Dynamic Plus package comes in handy, increasing these values ​​accordingly 761 hp and 1,020 Nm. This release reaches a hundred in 3.4 seconds and accelerates to 250 km / h.

All that with a maximum promised range of 526 km – this is due to the battery with a capacity of 107.8 kWh. Unfortunately, a large link must weigh its own, which translates into 2655 kg of empty weight. No wonder AMG opted for robust & hairsp; – & hairsp; brakes – standard discs are 415 mm in diameter, optional ceramic discs are as much as 440 mm.

What else distinguishes the AMG version? Above all the ability to select the engine sound, depending on the driving mode, which, together with a set of Hyperscreen screens and well-kept Artico leather armchairs, is to make the journey more exciting.

Price? As with the SL, it is also still unknown. So does a specific sales start date. Those willing must be patient and wait at least until spring 2022. However, judging by the first impressions – in both cases it’s worth it.

The variety offered by video games never ceases to amaze him. He loves OutRun's drifting as well as the contemplative walks of Dear Esther. Immersing himself in other worlds is an incomparable feeling for him: he understood it by playing for the first time in Shenmue.
Previous Crisis on the border. The head of NATO condemns the actions of Belarus. “It’s inhuman”
Next Leicester – Legia. Marcin Mieniel criticizes the players of Legia. Europa League