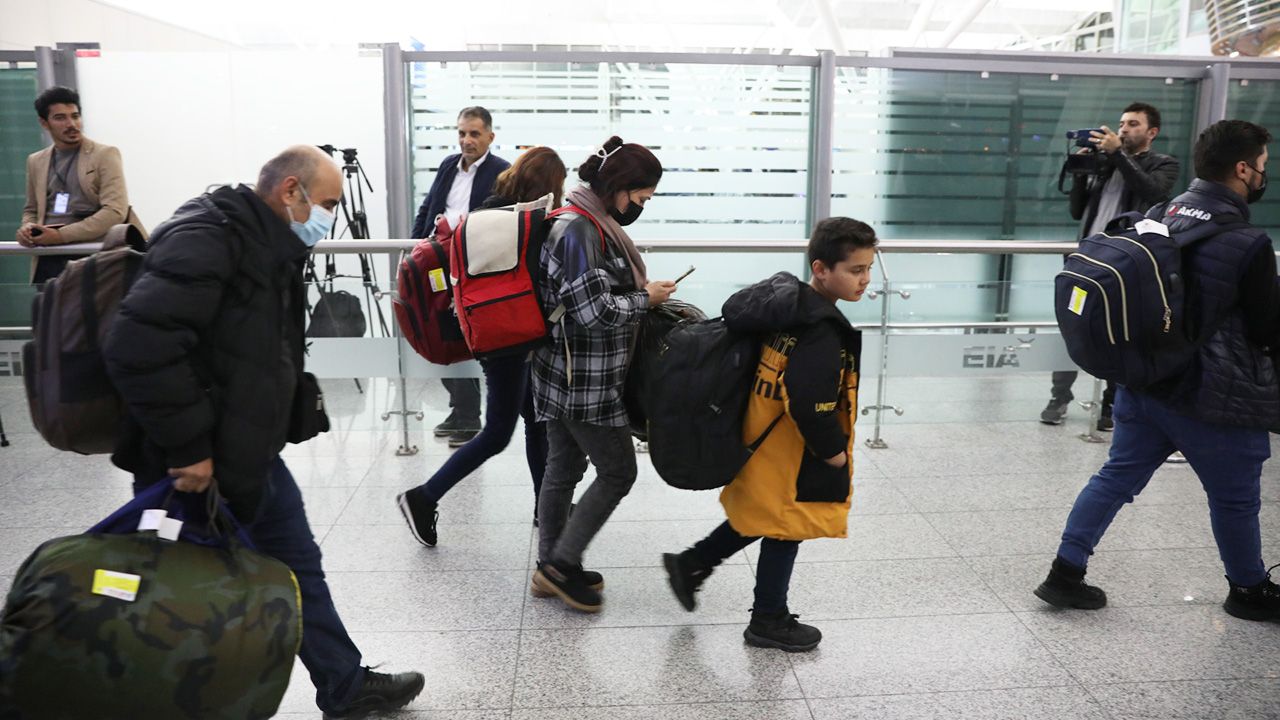 Migrants return to Iraq. Dramatic relations and “no chance of getting to the EU countries”. Kurdistan has no doubts

More groups of migrants, deceived by the regime of Alyaksandr Lukashenka, return to the countries of the Middle East after unsuccessful attempts to cross the Polish-Belarusian border. Commenting on this situation, Iraqi media write about the migrants’ regret that they have left the country and hope that the government will bring the rest of the people to the country.

Russia ready to aggression against Ukraine? Attack simulation from the North, East and South

The Belarusian independent portal Nexta, citing American intelligence, publishes a simulation of the invasion of Ukraine, which is to take place in early 2022 …

For several days, an action has been underway in Minsk related to the leaving of Belarus by several hundred migrants who were counting on the possibility of illegal crossing the border of the European Union.

On Thursday, recordings of passengers waiting for a flight from Minsk were published on social media. The Iraqi Embassy in Moscow previously said the flight was to be free, and the machine would fly to Baghdad via Irbil, the capital of Iraqi Kurdistan.

“An evacuation plane has arrived in Minsk. 340 people will leave Belarus and return to Iraq. Meanwhile, there are still probably 8-22 thousand people in Belarus. migrants. Some are still in the border area, some are still in the logistic center, ”wrote Franak Viačorka on Thursday on Twitter.

Cichanouska’s advisor added in another entry that Lukashenka, after the calls he received from EU leaders, “feels that his blackmail has worked”, and he himself has been “recognized” as the leader of Belarus.

Iraqi media about the returned migrants

The local media write about the situation of migrants who returned to Iraq. Migrants decided to leave Belarus for the sake of “No chance of getting to EU countries” – notes the Kurdistan24.net portal.

The tactics of the Belarusian power structures in the migration crisis are changing. Small groups of migrants are being pushed to the border with Lithuania – said the boss …

As difficulties, migrants indicated terrible weather conditions (cold), lack of food and drink, and difficulties in crossing the protected Polish border. One of the people speaking for Kurdistan24 said: “We are coming back because we were not allowed to enter. If the situation in Kurdistan was good, we would not be leaving it. In the context of the suffering there [na granicy – red.] we experienced I regret the decision to leave Kurdistan, which in the end is our homeland ”.

One of the migrants mentioned the high cost of travel to Belarus ($ 20,000 for a family) and the ill-treatment they experienced by Belarus, and the Polish authorities’ refusal to cross the border. Belarus was also supposed to prevent them from returning to Minsk. In the end, permission was granted to those who expressed their readiness to use the return flight organized by the Iraqi authorities. The woman stated that the difficulties of the migration route they decided to use would effectively dissuade them from further attempts to cross it to the EU.

Another migrant, a teenager from Erbil, called on the Iraqi authorities and the KRA (Kurdistan Regional Government) to bring the rest of the country’s citizens from Belarus (many of them are women and children), whose situation continues to worsen.

The man emphasized that he was returning to Kurdistan hoping to find a job in his country and would stay there. “Nobody wants to leave their home and family,” he added.

Reaction of the authorities of the Kurdish Autonomy

The return of Kurds to Irbil was commented on by the Prime Minister of the Kurdish Autonomy, Mustafa Barzani, “expressing satisfaction with the fact that they reached the country safely, and their history will be a pretext for the government to take action to prevent a similar event from happening in the future.” The politician assured that the Autonomy would make every effort to bring the rest of those willing to return to the country.

In turn, the spokesman of the government of the Kurdish Autonomy Jutyar Adil, after the migrants returned to Iraq, said that they were “warmly welcomed” in the country, and the return flight can be considered as “First step” towards solving the migration crisis on the Belarusian-Polish border.

Autonomy authorities notice that migrants have become victims of smugglers and traffickers. The whole affair was politicized and used in an unsuccessful attempt to “discredit the Kurdish Autonomy”.

“Nevertheless, Erbil and Baghdad will work together and decisively to limit migration from Iraqi territory and break up networks of people smugglers. So far, 10 smugglers from the Kurdish Autonomy region have been arrested, ”we read.

Head of Frontex on cooperation with Polish authorities. “Flights to Iraq for 1700 migrants”

The European Union must prepare for other migration crises, similar to those at the borders between Greece and Turkey or between Poland and Belarus …

The Kurdistan Regional Government has also issued an official statement on migrants.

“In recent weeks, a group of KRA residents have become a victim of smugglers working in the name of gaining material benefits. Some political forces decided to make use of the above and to discredit the KRA authorities. Nevertheless, it is obvious that this action was unfounded and had only a propaganda dimension. The Kurdistan authorities have taken the necessary steps to enable the voluntary return of those stranded on the border between Belarus and Poland. The government of the Autonomy also thanks the Iraqi Ministry of Foreign Affairs and other entities involved in assisting the repatriation of migrants, ”we read.

Kurdish woman: It’s all a lie

In an interview with rudaw.net, a Kurdish woman staying in the center in Dąbrowa Białostocka appealed to future potential migrants not to decide to travel to Europe via Belarus. – I beg everyone not to try to use this route. It’s all a lie, says the woman.

The woman revealed that she had been deceived by smugglers and Belarusians involved in the practice. It tells about multiple attempts to cross the border and returns to Belarus.

The woman was separated from her family due to her hospital stay in Poland. She described the entire journey from Kurdistan to Belarus, multiple attempts to cross the border and difficult conditions in the Belarusian forest, lies on the part of Belarusian border guards and other people involved in the practice.

Videogames entered his life in the late '80s, at the time of the first meeting with Super Mario Bros, and even today they make it a permanent part, after almost 30 years. Pros and defects: he manages to finish Super Mario Bros in less than 5 minutes but he has never finished Final Fight with a credit ... he's still trying.
Previous Górnik Zabrze – Legia Warsaw. Four fans detained by the police
Next “Jack Ryan: The Theory of Chaos” and “Kong. Skull Island” are new from HBO GO for this week! – PC World