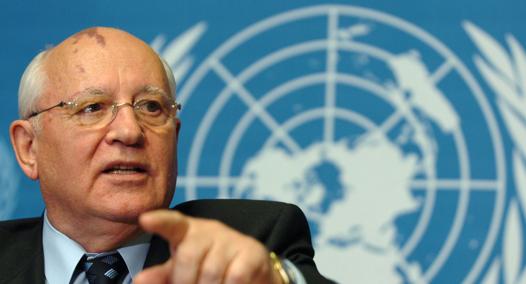 Mikhail Gorbachev, former president of the Soviet Union, died at the age of 91. He will be buried next to his wife Raissa in Moscow

Mikhail Gorbachevformer president of the Soviet Union, died at the age of 91, after a long illness. Gorbachev – who, as the last general secretary of the Soviet Communist Party, ended the Cold War with the United States, but could not avoid the collapse of the Soviet Union – was the last leader of the USSR, and was awarded the Otto Hahn Medal for Peace and, in 1990, the Nobel Peace Prize. According to reports from TASS, he will be buried in the Novodevichy cemetery, in Moscow, in a family grave, where he will be able to rest next to his wife Raissa. Of Putin’s war on Ukraine he said, according to the director of the Moscow Echo, a few months ago: This invasion has ruined all his previous efforts for Russia.

When his name came out of the Politburo meeting he had to choose the successor of Konstantin Chernenko, everyone was taken aback. The highest rated candidate was Viktor Grischin, 68, another exponent of the gerontocracy that ruled the USSR for some time. After Leonid Brezhnevwho died at 76 in 1982, the 68-year-old had come Yurij Andropovand then, after only two years, the seventy-three Chernenko who passed away on March 10, 1985.

Instead, this time the party leadership had accepted the recommendation that Andropov had made on his deathbed.

Choose a young man, choose Gorbachev because he is the only one who can restore the country’s momentumput the USSR back on its feet and give breath to the party.

Thus the 54-year-old Mikhail Sergeyevich, who had recently become a full member of the supreme governing body of the USSR, found himself in Gensek’s chair on 11 March 1985, crowning a brilliant career, which began in his native Stavropol region, in close to the Crimea.

It was there that the young Mikhail, born in 1931, had experienced the thaw of the time of Khrushchev, which had raised so many hopes in the most dynamic paintings. And it was there that his luck was born when he found himself, as party secretary for the region, ad accompany the powerful head of the KGB Andropov on vacationwho had taken him under his wing.

Already its appearance, the fact that his wife Raissa appeared in publicwanting to travel around the country and meet people were seen as a revolution. We talked about a new thawwhile he explained that the country needed an acceleration to try to regain the ground lost to the West.

The situation, as the KGB well knew, was disastrous. The Brezhevian stagnation was followed in the 1970s by the resumption of the arms race. Ronald Reagan had given the final blow with his Star Wars program which had thrown the military into panic and had blown all economic plans.

The USSR was unable to produce consumer goods, military spending was insane, the adventure in Afghanistan (to contain the advance of capitalism) was draining the country in every sense. Acceleration, with productivity incentives, followed the program to link wages to workabandoning egalitarianism.

Then came Perestroika and Glasnost. Restructuring of the Soviet economic system with the introduction of very strong market elements. And in addition Transparency, the participation of the people of which Gorbachev sought the consensus.

He went hand in hand political transformation. Remove the old conservatives from key posts, in the government and in the party: Eduard Shevardnadze he took the place of Andrei Gromiko, a survivor of Stalin’s time, in the foreign ministry. Andrei Sakharov was returning to Moscow from internal exile. The CPSU Conference was convened in which for the first time a kind of current was born, the democratic platform. Then the free electionsuntil the historic abolition in 1990 of Article 6 of the Constitution which established the leading role of the party.

Meanwhile, the gensek (generalnij sekretar) he faced the mad arms race, trying to convince the Americans that the image that the TV and popular newspapers projected of him was the true one. The first to believe in him was Margaret Thatcher
: We can do business together (we can work together). At the first summit, in Geneva, Reagan did not make large openings. But then the agreements on the limitation of warheads, of intercontinental missiles, arrived, with Reagan and with Bush the father.

The USSR could now devote its resources to improving the living standards of its citizens.
Perhaps, however, it was already too late.

The resistance of the bureaucrats, of the directors of the factories, of the whole nomenklatura was very strong. Gorbachev did not have the courage to push to the end and, for this reason, it was abandoned by the most ardent reformists, such as Yeltsin and Shevardnadze.

The campaign against vodka had helped to undermine its popularity which at first had been very high. Then came the program of the five hundred days of Grigory Yavlinsky, which should have led to the introduction of the market economy in the USSR. Faced with the harsh attacks of the old bosses, from Ligachev to Ryzhkov, Gorby, as they called him abroad, backed down. He abandoned the young economist to adopt a much more moderate program instead.

The monetary reform which led to rush to the hoardings in stores. Hours in line to receive a sausage. Rationed sugar, cigarettes, soap. The radicals had gathered around Boris Yeltsin that after being ousted from the top he was resurrected with the triumphal election to the presidency of the Russian Supreme Soviet. The empire was beginning to fall apart.

The victory of Solidarity in the Polish elections of 1989, the opening of the borders by Hungary, the collapse of the Berlin Wall on November 9 of the same year, which Gorbachev had the foresight not to oppose. Then the recession of the three Baltic republics. Gorbachev tried to hold together the pieces of the USSR by resorting to the Union Treaty, among all the other Republics. But the situation was getting more and more difficult.

The secretary, who in the meantime had become president of the USSR, was uncertain, swaying between the reformists and the conservatives. The latter had the impression that he would have endorsed their initiative to put things right. And on the eve of the signing of the agreement, on August 19, 1991, they attempted a coup. On paper they were able to control the country: Prime Minister, Minister of the Interior, head of the KGB. They did not take into account the fact that the citizens of the USSR had changed. And that Boris Yeltsin was unwilling to give up.

When Corvo Bianco presented himself to harangue the crowd in front of the Supreme Soviet building and got into one of the tanks sent by the coup leaders, the army did not react. The coup had failed (only the Minister of the Interior Pugo committed suicide, the others ended up briefly in prison).

Power was now in the hands of the head of Russia, the most important republic of the USSR.

Faced with a new attempt by Gorbachev to relaunch the Treaty of the Union, Yeltsin went on the attack. Together with the leaders of the other two Slavic republics, Belarus and Ukraine, he decided on the dissolution of the USSR on 8 December. On Christmas Day 1991 the Soviet flag was lowered from the highest flagpole in the Kremlin.

Gorbachev had to leave an armchair that no longer existed.

The post-dissolution of the USSR is a different story. Beloved abroad, the last gensek was hated at home. His attempt to return to the political scene in the 1996 elections was catastrophic: he won less than 1 percent of the vote.

Retired to the foundation that bore his name, he had another hard blow in 1999, with the death of his beloved Raissa.

With Putin, Gorbachev had left the list of non-existent in Russia and had begun to play a role also of international representation. Then, faced with the authoritarian turn of Vladimir Vladimirovich, he had distanced himself from the Kremlin, repeatedly criticizing Putin’s choices. Until he became one of the owners (together with the oligarch Aleksandr Lebedev) of the opposition newspaper Novaya Gazeta for which Anna Politkovskaya had worked.

In March 2021, for his 90th birthday, the president’s spokesman speaking to reporters simply said that the Kremlin views Gorbachev as a part of history with great respect. Certainly there will be many more who will mourn it in the rest of the world and especially in Germany.

Videogames entered his life in the late '80s, at the time of the first meeting with Super Mario Bros, and even today they make it a permanent part, after almost 30 years. Pros and defects: he manages to finish Super Mario Bros in less than 5 minutes but he has never finished Final Fight with a credit ... he's still trying.
Previous “In Florence my 9-year-old son forced to put the Napoli shirt upside down”
Next Kendall Jenner’s black bra top is the perfect outfit for a date night