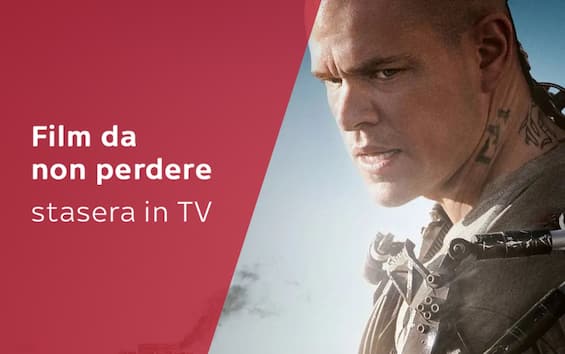 Movies Tonight on TV not to be missed on Friday October 28, 2022

Bruce Willis and Hayden Christensen in an action movie. A broker and his son accidentally witness the murder of a policeman by some criminals.

Remember me, 21:00 on Sky Cinema Romance

Silvio Muccino conducts Fabrizio Bentivoglio and Monica Bellucci. A girl’s desire for stardom forces her parents to look into their past.

Regina King in a drama about racism and injustice. A pregnant girl must prove the innocence of her boyfriend accused of rape.

Massimo Ghini and Lucia Ocone in a comedy with a fantasy touch. Two engaged couples are preparing to meet their respective…monstrous families.

Sequel to the successful ensemble comedy. After passing high school, the group of friends takes a vacation.

Alessandro Siani directs and stars in a comedy that also sees Diego Abatantuono in the cast.

Matt Damon in a film by the director of “District 9”. A worker must reach an orbiting station protected by a group of robots.

Martin Scorsese recounts the adventure of an orphan struggling with an automaton to rebuild.

Isabelle Huppert and Chloe Grace Moretz in a thriller. A girl forms a morbid friendship with a dark widow.

Luke Wilson and Martin Sheen in a biopic. A football team in Texas catches the attention of President Roosevelt.

The show conducted by Carlo Conti continues in which some celebrities change identities to develop some performances.

TV series that tells the adventures of a specific section of the SWAT that operates in the city of Los Angeles.

On the occasion of the centenary of the march on Rome, Ezio Mauro traces the history of that event.

Gianluigi Nuzzi and Alessandra Viero lead a program on great yellows and unsolved cases of the Italian territory.

Last film in the Rambo saga, with Sylvester Stallone returning as the protagonist.

Diego Bianchi leads one of the most popular programs of recent years, which analyzes social and political dynamics with satire and irony.

Eleventh season of the reality show in which we discover new chefs and cooks.

Show with the popular comedian and impersonator Maurizio Crozza who analyzes current events with a thousand laughs.

David Martin is the lead editor for Spark Chronicles. David has been working as a freelance journalist.
Previous Qatar World Cup, third place final, Croatia-Morocco 2-1, goals from Gvardiol, Dari and Orsic
Next Jacob Batalon is “doing his thing” outside the MCU