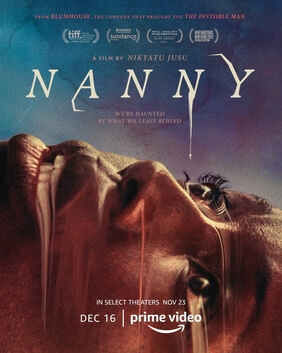 Nanny is a 2022 film directed by Nikyatu Jusu.

Aisha (Anna Diop), a Senegalese immigrant, finds work as a nanny for a wealthy couple in Manhattan, Amy (Michelle Monaghan) very busy with her career and Adam (Morgan Spector), a photographer not inclined to family life. Her dream is to bring her little son Lamine to New York. While Aisha increasingly wins the affection of the spoiled little Rose, through signs of supernatural presences and omens, she is increasingly worried about the fate of her son in Senegal, crushed by the American Dream and by an ever more hostile. To Nikyatu Jusu, director of this Nannyhis first work, acclaimed at Sundance with the Grand Jury Prize and just landed in the Prime Video catalog, Jordan Peele’s films must have been liked a lot, starting with the choice of the very good Anna Diop (already seen in Us), and from the Blumhouse production, everything seems to go towards the American director. Yes, because in Nannyhorror as in Peele’s cinema, is a pretext to tell much more.

Not only reality as we live it, but the sad reality of immigrants and women above all. In Jusu’s cinema, one breathes the disparity between men and women, blacks and whites, and that much-coveted American dream – now smoke and mirrors – slowly turns into a waking nightmare. In Nanny, the real horror is not the presence and shadows of spiders on the walls, much less snakes, spirits and dreamlike aquatic creatures of African popular culture, the real horror hides behind the – apparently – clean face of a rich couple New York; behind the home walls, in the past and in the dreams of those who have nothing and must conquer their future tooth and nail. “I’d rather be a slave in America than in Africa. Here at least when you work you see the money, ”says Aisha’s hairdresser friend, answering her if she will ever return to her country one day. But the reality in the United States is also dealing with the bigoted and obtuse mentality of the “whites”, with the salary that is slow in coming, and poses terse reflections on what it means to be a mother today in the digitized and hyper-connected era. What happens inside us when things don’t go as they should and we find ourselves alone in a role that someone has tailored for us? Nanny show without showing, reveal without revealing too much, perhaps even teasing us a little, and this probably won’t please those looking for jumpscare and scares. But this kind of cinema is like this, take it or leave it.

Nanny it is faithful to the independent cinema that has innovated and continues to innovate the genre, bringing it to different levels, if not completely new in terms of themes (Romero had suggested something to us way back in 1968) at least visually original. Nikyatu Jusu’s film is political, conscious and proud to be, a cinema that has assimilated that much shouted Black Lives Matterand that in the ninety-seven minutes of Nanny leads us to experience firsthand what it means to be black today in American society (and beyond). Work, produce, reproduce and die. Aisha’s reality, like Jusu’s cinema, appears suspended between the need to tell our reality and that of escaping it. Nikyatu Jusu succeeds and tells of the unspeakable need to scream, a scream that explodes in a perhaps somewhat forced but inevitable ending. A circle that opens with life and closes with death. Sometimes with both together, at the same time.

David Martin is the lead editor for Spark Chronicles. David has been working as a freelance journalist.
Previous there is (not) love in the air on Prime Video
Next Alan’s Automaton Workshop Download PC Game For Free