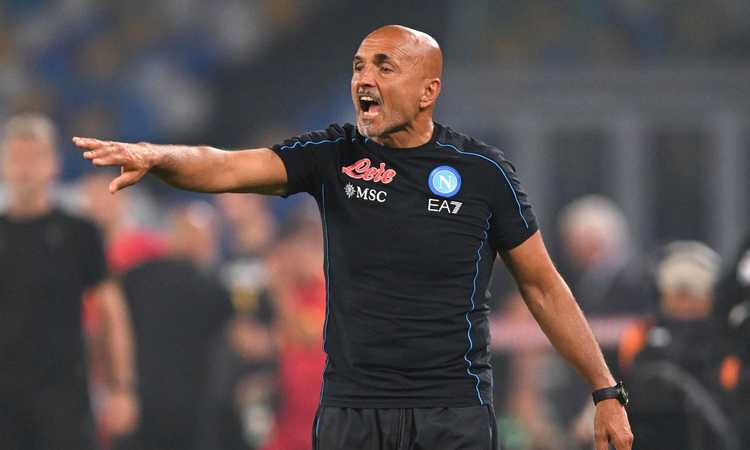 Eve of Naples-Turin, scheduled for tomorrow at 3pm at the Maradona Stadium. The coach of the Azzurri, Luciano Spallettipresented the tender at a press conference:

INJURIES – “When our players go to the national team we follow them day by day by phone. Someone did well to play these games because they played a little less with us, someone like the Italians, having played the double game, followed up on the speech of the way of interpreting Napoli, of playing for Napoli. We have not had any injuries, but only following a normal job. The possibility of training all together, we have enough focus on our speech and it takes little to recall it. In fact this morning at the training I saw them all present and concentrated with their heads developing a very good job. Despite the two weeks we are ready for tomorrow’s appointment “.

CLASSIFICATION – “Every match serves as a reminder if we are a strong Napoli or not. It is a discourse that goes beyond the evaluation or importance of a match because the path will be long and difficult. We have to do the same things again, it takes constant commitment, not for the search for the result but also for the single training session. It takes the correct attitudes that give the possibility of continuity of behavior in the long term. Each game has a particular value because there are always three points to be won and because it confirms that you are working well and do the right things. I do not see the possibility that a result can change the history of a championship. It can give a further boost but then the work is in the long term. I have never seen a Scudetto awarded in September-October, but to June and between now and June there is a long way to go “.

RASPADORI-SIMEONE – “Raspadori and SImeone are both to chance in tomorrow’s match, they will both play. Then there are those who will play 60 minutes, who 30 and it will be seen who will determine the game. The speech of those who play more or less must be addressed correctly because in order to make this long journey we need people in condition, stimulated, people who have minutes in their legs. It is difficult to play a game after months and you have to use the players in the five substitutions. We replay on Tuesday and the fact to write ‘This starter and the other on the bench’ changes little. We have the two of them up front and with a game in three days we will use them both. 40. When one has given snatches for a few minutes, then the other takes over who must give the snatches during the game “.

AC MILAN-NAPLES – “In Milan, if a capable person like Pioli says they played a beautiful game in many ways and that’s what they wanted to do, that they’ve had many scoring chances, I quite agree with him. This gives value to our victory. We won against Milan and against a team that did things very well so we have to give credit to our players. Then from my point of view I go into what we need to do in general, I say that talent alone is never enough because then we have to be executive even in what is not our quality of the moment. When Pioli says they had several balls to score he is right, there is a bit of our participation in the opportunities Milan had. In the sense that we are not executive states and we did not feel the danger, the need to do something different than what I can do. Tomorrow Turin will have the central who is a former midfielder and will come to play the midfield under the midfielder mpisti and will also need to work for the attackers. When will we have

CLASSIFICATION – “I think the balance will last a long time because the teams are all very well equipped. It was difficult at the beginning to identify who would dictate the times. Some teams have lost a few points but the situation is temporary and can be resumed. The seven teams often mentioned they have the credentials to make a high-ranking championship plus some who are inserted to undermine the balance like Fiorentina last year. I don’t see anything special in this beginning. It’s too early to make assessments for me. “

RASPADORI – “He no longer has an advantage playing with a striker close by. It depends on the type of game that comes out. If there is a team that presses you hard and we can’t build with quality, you need to throw it at the attacker and Raspa does not have the physicality of Osimhen or Simeone. But if we have to start the action, we took Raspa because he can do everything. Such an important purchase we knew would not create blocks or embarrassing situations. Jack is a strong footballer because he has muscle, watts in the legs and kicks well with right and left, he feels the goal well, he has personality, he is a boy who wants to improve and will certainly not stop at the first satisfactions. He is a bit ambitious like our team: we intend to become champions (for the youngest). The club has been very good at this. ”

NEW PURCHASES – “The new signings have adapted immediately to the level of football we want to do, to the level of the standings we want to pursue. We want to get to the bottom of the championship, there is a high ranking crowded with strong teams that produce good football . We have adapted well and we are continuing our discourse. We have to continue, which is the most difficult thing. We must not speak only of continuity of results but of our expression, bumping into opponents in any way call “.

WHAT TO IMPROVE – “Domenichini said that I was a little angry, Milan had chances in our area and because we are unable to participate in certain phases of the game. We have to grow there, because for the rest we have hot flashes, players who fit in. . Torino are a bad customer, we know the value of the team, of the club, of the way their coach works because Juric works, it is visible. When people work they always bring home something. There is to be better than them. , they know how to build from the bottom, just as Milinkovic can put a ball directly on the edge of the area, the supporting midfielders know how to play and defend in multiple ways, even if they know how to fight all-out. We want to go on to win difficult games, not the easy ones and we are ready to compete against strong teams like Torino “.

REFEREE WOMAN – “Until now, no female referee has shown that they are ready for the top category, but I am convinced that Ferrieri Caputi will be able to assert himself and win the respect of everyone like all referees so far”.

TRAINING CHANGES – Juan Jesus and Ndombele are two ready players. The second is growing and will be very useful for the qualities that we lack in certain moments of the game. He easily sports with his opponents, he has this physical strength to move you without doing anything in particular because that’s how he is. Something will change between here and Tuesday. Tomorrow I don’t think I will change much compared to the team he has played often. The players are doing well, they are back in an optimal condition, they have a clean mind, they are eager. There won’t be many changes. “

ADVANTAGES AND DEFECTS – “The real potential champions are those who have the mental strength not to make many differences, know what their profession is, that more things are involved in what they do, there is a need to know how to react in times of difficulty. to follow up on the discourse they are facing now. The correct way to play, because with the team we see each other often, we talk a lot. The players know as much as I do about football, about game situations. I have nothing to ask them to do something my players are different. Maybe I’d like not to see some goals we missed in front of goal, which can weigh in the long run. It’s a shot that young players have to make. “

TROPHIES – “We are ambitious and we want to give continuity to this series of results. We will try to go all the way. I like to look at what will be and try to bring home something in the future”.

David Martin is the lead editor for Spark Chronicles. David has been working as a freelance journalist.
Previous Telepass, the news upsets everyone: now you can also ride a bicycle
Next Plane hit by three bullets during landing: one passenger was injured – Corriere.it