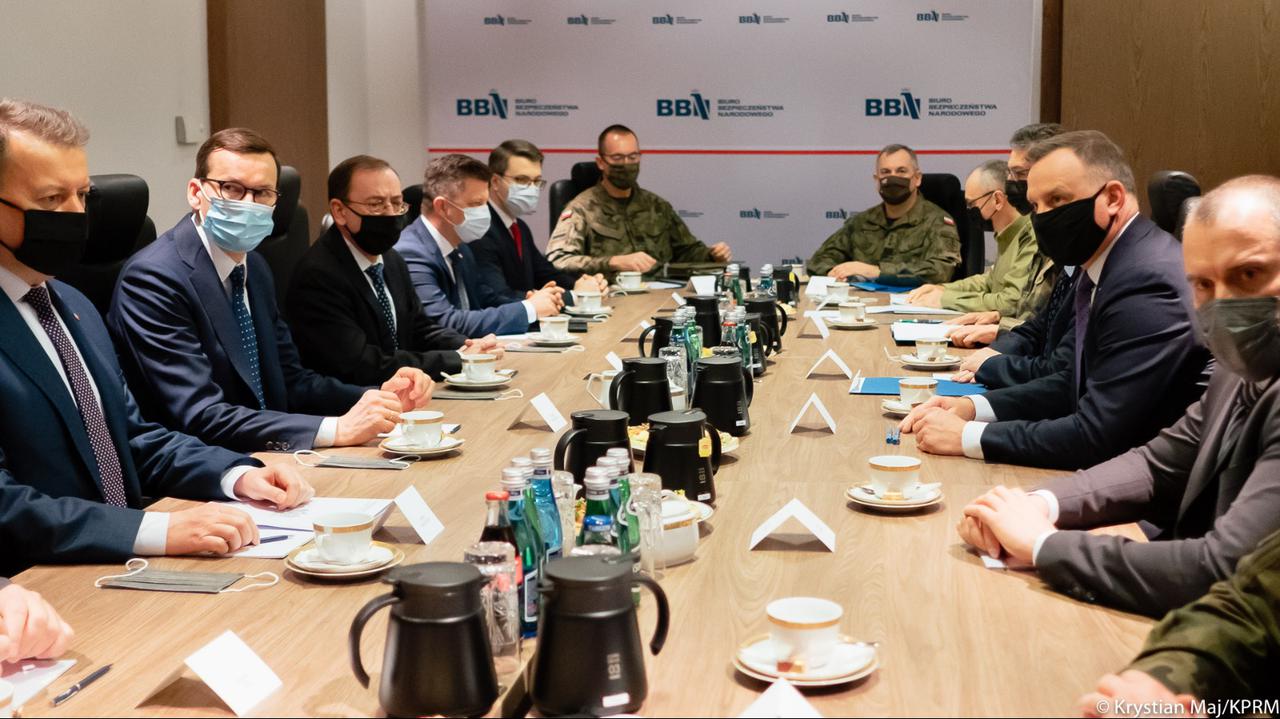 Polish-Belarusian border. A meeting of the crisis management team with the participation of the president and the prime minister

On Thursday morning, a meeting of the crisis management team was held with the participation of President Andrzej Duda, Prime Minister Mateusz Morawiecki and, among others, ministers of the interior and administration, defense and foreign affairs. In the afternoon, the president will meet in Brussels with NATO Secretary General Jens Stoltenberg, the President’s Office reported. As Deputy Minister of Foreign Affairs Marcin Przydacz said at the press conference after the meeting, “the western world together with the region of Central and Eastern Europe” should “send appropriate signals to Minsk and Moscow” to avoid further escalation of tensions.

This is another conference on the situation at the border. Last week’s meeting was attended by – apart from the president and prime minister – heads of ministries, services and the Armed Forces.

“The situation on our eastern border is changing dynamically, which is why we are constantly monitoring it and coordinating the activities of all Polish services. This is achieved, among others, by the meetings of the government with President Andrzej Duda at the National Security Bureau. Another briefing is currently underway. We care for the safety of Poles!” – Prime Minister Morawiecki wrote on Facebook after 10 o’clock.

Przydacz: we want to maintain the solidarity of the West on the migration crisis

At the conference after the conference, the deputy head of the Ministry of Foreign Affairs, Marcin Przydacz, spoke about the recent diplomatic activity of the head of government. He recalled that on Wednesday Morawiecki visited Paris, where he met the French President, Emmanuel Macron, and Ljubljana, where he spoke with the head of the Slovenian government, Janez Jansza. In previous days, the prime minister met with the leaders of Lithuania, Latvia, Estonia, as well as the prime ministers of the Visegrad Group countries (including Hungary, the Czech Republic and Slovakia) and the Prime Minister of Croatia.

In turn, on Thursday – Przydacz reminded – the prime minister will pay a visit to Berlin, where he will meet with German Chancellor Angela Merkel and with Olaf Scholz, who is a candidate for the new chancellor of this country. On Friday, Morawiecki will go to London.

The deputy minister of foreign affairs also indicated that after the meeting at the BBN, the president went to Brussels, where he would talk with NATO Secretary General Jens Stoltenberg. At. 14.15 Duda and Stoltenberg will meet with the media.

– All this in the context of not only the events on the border and the aggressive hybrid operation to which the EU’s eastern borders are subjected by Minsk with Russia’s consent, but also in the context of the deteriorating security situation in the region, said Przydacz, pointing to the observed movements of Russian troops around Ukraine. – We can see what is happening on the gas market. Winter is coming, we are aware that Russia may use this situation to play its policy – he added. Przydacz also spoke about the increased disinformation activity regarding the migration crisis. – All this requires our in-depth analysis. This coordination meeting at the BBN served this purpose also today – he added. According to the deputy head of the Ministry of Foreign Affairs, this situation requires stimulating the activity of the West, or – at this stage – maintaining the solidarity and unity that have been achieved over the last weeks. – The point is that, in the context of these threats, the Western world, together with the region of Central and Eastern Europe, should send appropriate signals to both Minsk and Moscow, so that no further escalation activities take place. We will continue this mission for the next few days, stressed Przydacz

Crisis on the border with Belarus

There has been a crisis at the borders of the EU and Belarus since the spring saw a sharp increase in the number of attempts to illegally cross the Belarusian border with Lithuania, Latvia and Poland by migrants from the Middle East, Africa and other regions. The EU and member states emphasize that this is the result of the deliberate actions of Alyaksandr Lukashenka’s regime, which instrumentally uses migrants in response to sanctions.

From September 2, due to the migratory pressure in the border zone with Belarus in 183 localities in the province. Podlasie and Lubelskie, there is a state of emergency which will last until December 2. Journalists, among others, are not allowed to enter these areas. Pursuant to the special act, a steel fence is to be erected in Podlasie by the middle of next year on the border with Belarus – a barrier 180 km long and 5.5 m high.

Videogames entered his life in the late '80s, at the time of the first meeting with Super Mario Bros, and even today they make it a permanent part, after almost 30 years. Pros and defects: he manages to finish Super Mario Bros in less than 5 minutes but he has never finished Final Fight with a credit ... he's still trying.
Previous Diego Maradona died a year ago. The proceedings are ongoing
Next Xiaomi Redmi Note 11 4G officially. Price and specification