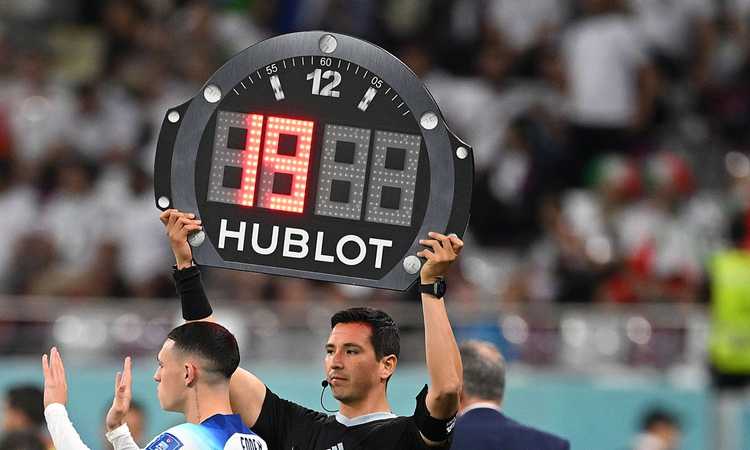 Qatar 2022 and the maxi-recoveries: the actual time is the same as in Russia 2018, but the novelty can arrive in Serie A | First page

Qatar 2022 World Cup they are proving to be a one-of-a-kind experiment. Not only for the “demountable” stadiums that will be sorted out at the end of the event, not only for the time placement between November and December in the middle of the championships butalso and above all, for the choice dictated by the head of the referees, Pierluigi Collina, to recover practically all the lost time in the second. And so it has become normal to see challenges that, instead of the canonical 90 minutes, come close to 120 minutes. A revolution that of injury time which brings us closer to actual time and which could soon also be tested in the championships.

ARRIVES IN SERIES A – Among the first championships ready to implement this novelty, for example, there is Serie A which, as early as January, could vary its modus operandi. The chaos around the refereeing world, reports the Gazzetta dello Sportallows fertile ground for the introduction of new possibilities and so also from the designator Rocchi will come the indication to the Italian referees to follow the same World protocol.

ACTUAL TIME? NOT REALLY – The maxi-recoveries, therefore, could soon become a full-blown reality, but do they really bring a benefit in terms of play and the much talked about effective time? Tuttosport in reality it reports a datum that goes against the trend: compared to the 2018 World Cup in Russia, the first in which VAR was introduced, the average effective time played has not changed. In 2018, matches lasted an average of 97 minutes for around 55 minutes of effective time. In these World Cups, on the other hand, the races have so far lasted an average of 106 minutes, but the actual calculated time has remained around 55 minutes.

David Martin is the lead editor for Spark Chronicles. David has been working as a freelance journalist.
Previous Fran Bow Free PC Game Download Full Version
Next Atlantis, tonight on TV with “Who killed Marilyn?”: previews