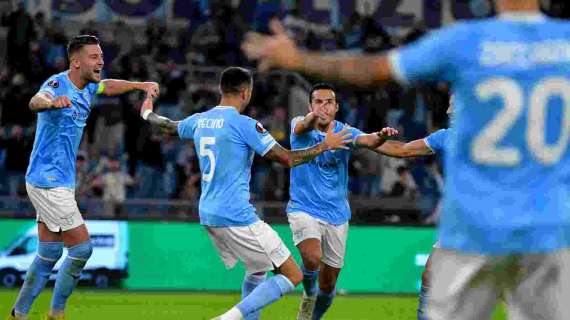 PROVEDEL 6: Isaksen puts it precisely one centimeter from the pole, stretches without even touching it. In the second half he saves himself with the crossbar, in the round of the ball he is slightly more inaccurate than usual. A cross almost surprises him and scares the whole Olympic. In the final he escapes from his hands, luckily the referee’s whistle had come first. Least safe night so far.

HYSAJ 6: He alternates interesting duets with Milinkovic and Felipe with small distractions that give Midtjylland chances on that side. However, the commitment is maximum, in the first half he also tries the coast to coast that stops at the most beautiful because he loses the right pace.

GILA 5.5: A game change which is a change of outcome. Played without sense, she had a couple of simple supports nearby, Romagnoli is a few steps away and instead looks for a throw for Marusic. Gift to Isaksen, finished packaging by Marcos Antonio. He gets a useless warning for protests, he is also scolded by Milinkovic, a captain like in Bergamo.

From 82 ‘CASALE 6.5: A few minutes, yet a couple of key interventions just a few steps from the door.

ROMAGNOLI 6.5: He does not have time to oppose Isaksen’s shot, for the rest, with good luck or bad, he controls who gravitates to his parts. His personality is the one shown since the first match in Biancoceleste.

MARUSIC 6.5: Nothing wrong, well positioned and aggressive at the right point. Very good preventive readings, when he can he lends a hand to Zaccagni on the offensive front.

MILINKOVIC 7.5: Stacker as a rule, he must become even more so without a building. The first right shoots him high, the second – from a standstill – sends him to the corner with all the strength of the adductor. Lazio does not ignore him, especially now. It’s a nice addiction.

MARCOS ANTONIO 6: He participates in the double mistake that allows Midtjylland to pass. The stop goes long, then the body fails to disturb the opponent who kicks. Too bad because otherwise he also plays a good game. His personality is not lacking, he always gives the option of passage to his partner.

From 55 ‘CATALDI 7: Each game confirms the evident growth. Accelerate the pace, increase the contrasts and the high reconquest: this is what is needed in directing.

BASIC 6: His soul is damned, you can see that he wants to make an impact, to leave his mark, it is one of the few opportunities received this season. He hisses the pole with a left-handed diagonal, we certainly expect something more.

From 55 ‘VECINO 7: It takes 3 minutes to make people understand the reason that pushes Sarri to use him almost always the owner. He throws himself in and creates the conditions for the 2-1. He makes the cleats and the voice heard.

FELIPE ANDERSON 7: Hyperactive, the performance with Atalanta has gassed him even more. At the center of every dangerous action, for this reason he also goes to the center of the trident. He tears all the time, he just lacks a pinch of malice to find the goal he deserved. An assist is needed by Milinkovic, another gold is cleared by the Var.

CHANCELLORS 6: Better as a winger than a center forward, he melts more once he is moved to the wing, still his natural role. In the middle of the trident he is hunted and cannot find the space to take advantage of his stride.

From 55 ‘PEDRO 8: Devastating impact, absolute champion. The first ball is a laser left that brings Lazio forward. Impressive leg frequency, he has the head of a champion in addition to technical skills. He had made another one, it is taken away by a matter of millimeters (never shown by a replay).

ZACCAGNI 7.5: State of extraordinary form, the extra man right now. Except that his moment lasts from the very first match of the season. They never catch him, a sensational strength in the legs, the crossbar and a couple of big shots deny him personal satisfaction. He puts in comfortable service for Pedro.

From 73 ‘ROMERO 7: With the necessary verve in the last quarter of an hour. The fire inside, eagerly awaited the opportunity.

ANNEX SARRI 7: Second consecutive victory without Immobile, alternating Cancellieri and Felipe in his place. Lazio produces, the result is tight due to the number of chances created, the goal conceded is due to a couple of individual errors. Now in Rotterdam the first place in the group must be sought.

David Martin is the lead editor for Spark Chronicles. David has been working as a freelance journalist.
Previous Confessions on the 7:45 am, Jessica Alba star of the new Netflix series
Next Luana D’Orazio, the Fiom of Florence, Prato and Pistoia on strike against the plea bargain: “Sentence that does not do full justice”