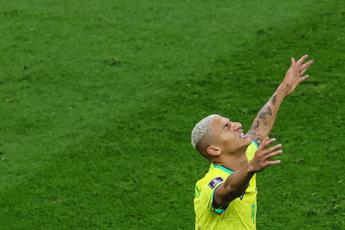 Richarlison, from the favela to the world dream

(Adnkronos) – A cover spill that drove the whole of Brazil crazy. The great protagonist of the debut in Qatar 2022 of the Selecao, 2-0 against Serbia, is the Tottenham striker who scored twice Richarlison.

If the first goal, after a hitherto colorless match, was a ‘robbery’, sense and flair for goal that made him ready for the winning paw in the small area in the 62nd minute, the bicycle kick came 11 minutes later is a candidate to become the most beautiful goal of this world cup. A dream come true: from the favelas of Nova Venecia, a town of 46,000 inhabitants in the state of Espirito Santo, to the spotlights of the world focused on him. Born in 1997, Richarlison de Andrade is the emblem of the redemption of a talented boy after a difficult childhood: growing up in poverty, as a child he sold ice cream, washed cars and collected coffee to lend a hand in the family.

The hard life in a favela, one of the many poor neighborhoods made up of shacks with tin roofs that populate Brazil, was told by Richarlison himself who at the age of 10 risked being killed by a drug trafficker from his area who had mistaken him for a competing drug dealer. The first contract of the talented boy from Nova Venecia arrives in 2014 when he signs for America MG. After a year with spring landing in the first team. In 2016 the move to Fluminense, in the summer of 2017 the move to the Premier League with Watford. The definitive leap comes to Everton, with the toffees he plays 4 seasons: 135 appearances and 43 goals. This summer Richarlison signs with Antonio Conte’s Tottenham for just under 60 million euros.

David Martin is the lead editor for Spark Chronicles. David has been working as a freelance journalist.
Previous Noir in Festival 2023, between cinema, literature and current events
Next Is it still war between Angelina Jolie and Brad Pitt?