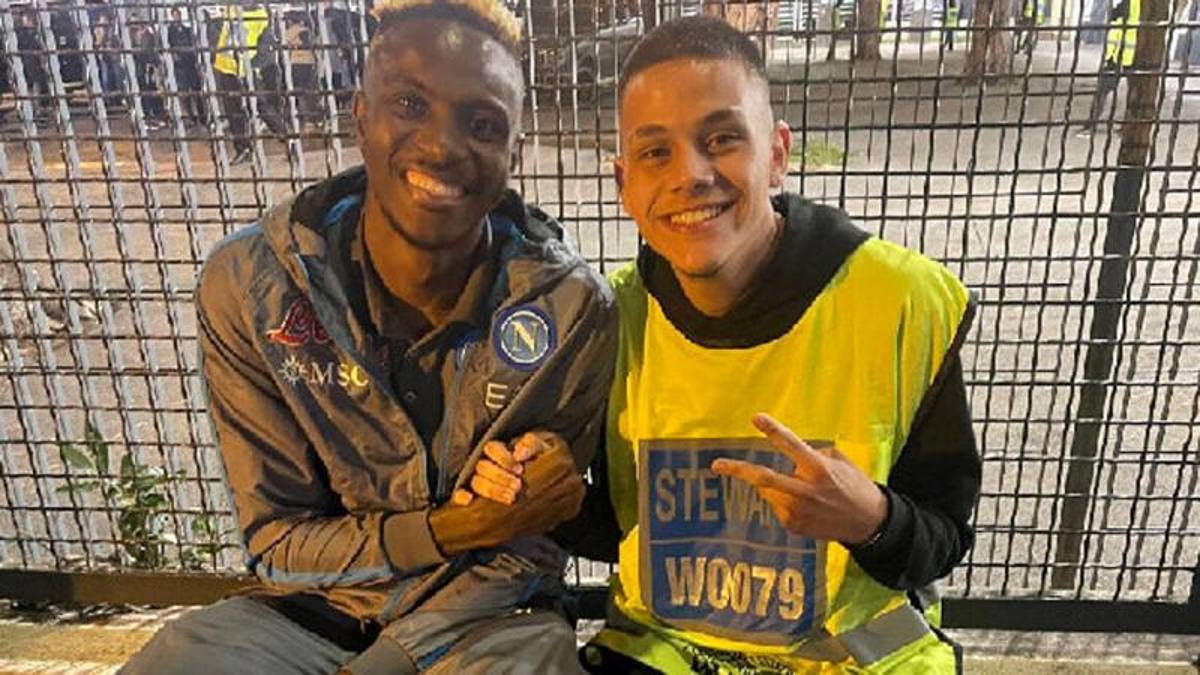 Rome, steward asks for selfies with Osimhen and now he is in trouble

The 18-year-old stopped to talk with the Napoli center forward, his idol: “I’m obsessed with him.” But the regulation of the external company that manages the stewards prohibits talking to the players

He will no longer be able to work during Roma matches at the Olimpico. All for having allowed himself a shot with a Victor Osimhen, the Napoli striker who last Sunday gave the three points to Spalletti’s men with a great goal. This is the bizarre story that happened to Matteo Lo Cicero, one of the stewards on duty at the Foro Italico facility during Rome-Naples. The 18-year-old’s task – engaged for the first time – was to monitor the area reserved for the families of the players who, after the end of the match, await the exit of the members a few meters from the tunnel used by the teams to enter and exit the stage.

Just to carry out his assignment in the best possible way, the boy decided to approach the Nigerian journalist Oma Akatugba, who at that moment was in an inaccessible area, to ask him what he was doing. When Matteo understood that he was a friend of Osimhen’s, it seemed to him that he was experiencing a more unique than rare opportunity. The Nigerian tip has always been the idol of the young steward, who waited for him for a souvenir photo. The blue bomber, after a chat with Tammy Abraham, approached and – smiling – asked Matteo if he had fun. The young man, without having to repeat it twice, took out his smartphone to show the champion how important it was for him: “My hands were shaking, my dream had come true – the words of the eighteen year old to Serieanews – I showed him all his photos, videos, he really enjoyed it. I’m obsessed with him, I’m always looking for hidden anecdotes. He even got excited looking at my eighteen year old cake “.

To ruin a magical moment, however, a manager arrived, who ordered him to return the badge and bib. The reason? Talking to a player is a violation of the rules. The episode left Osimhen stunned, who tried to take the defense of his new friend: “He is my brother, he is here with me. Why are you doing this?”. The player also inquired about how much the boy was being paid and – after hearing this – made a commitment to find him a new job.

David Martin is the lead editor for Spark Chronicles. David has been working as a freelance journalist.
Previous First grain for Minister Giorgetti, the recapitalization of Mps is a flop and Brussels smells of state aid
Next Chris Martin and Dakota Johnson get a restraining order against a stalker- Corriere.it