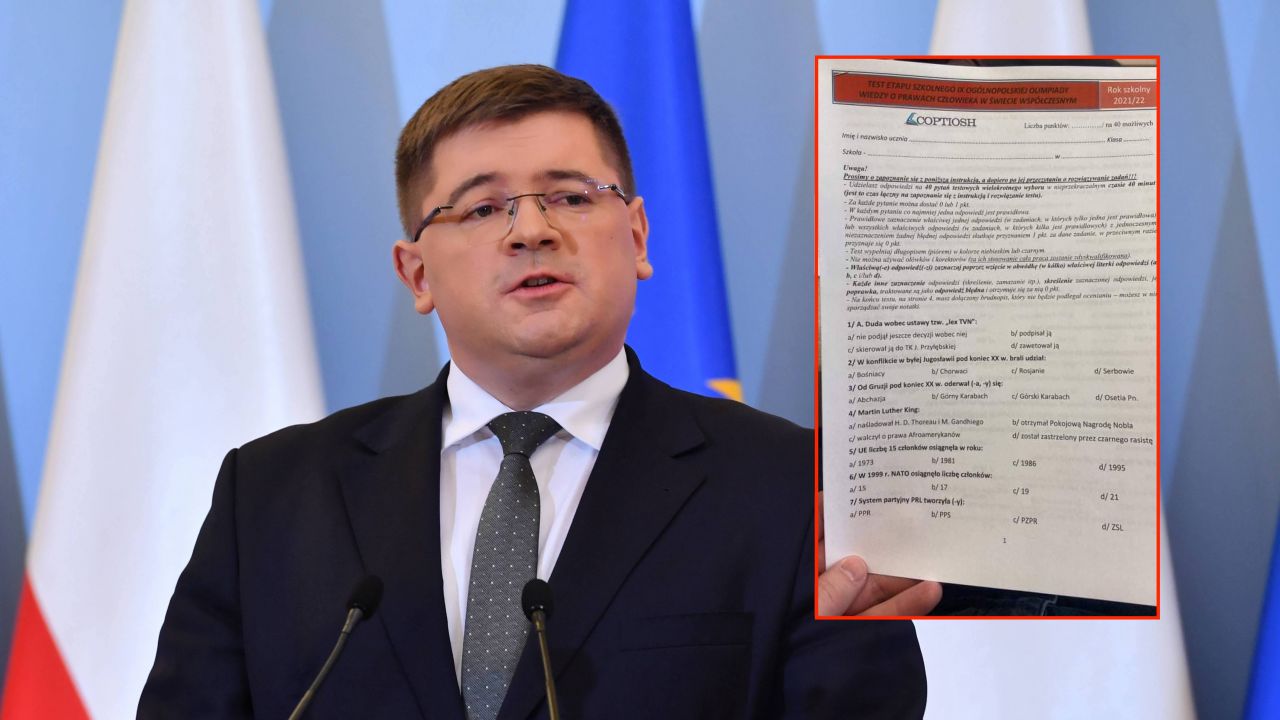 School Olympics and questions hitting PiS and the Constitutional Tribunal. We have the position of the ministry and the organizer of the competition

Students of Polish schools joined the Olympics of knowledge about human rights in the modern world. Already in the questions, instead of the Constitutional Tribunal, they wrote about “TK J. Przyłębska”, and the students were told to indicate which institutions “are controlled by PiS” and whether the government has weakened the independence of the prosecutor’s office. – These questions do not meet the requirements of the methodology of running the Olympics – Deputy Minister of Education Tomasz Rzymkowski says in an interview with tvp.info and emphasizes that this is why changes in the law are needed. – Students should demonstrate both knowledge and assessment skills – the competition organizers respond.

Sex educators will disappear from schools? Trzaskowski sends out the letter, the deputy minister replies

The tvp.info portal reached a letter sent by the President of Warsaw, Rafał Trzaskowski, to the parents of children from Warsaw schools. PO politician convinces in …

Pictures of the question-sheets circulated on the internet on Wednesday morning. It was about the school stage of the 9th National Olympiad of knowledge about human rights in the modern world. Its organizer is the Center for Subject-Thematic-Interdisciplinary Organization of Social and Historical Olympics in Białystok.

See also -> Amendments to the Education Act. Czarnek explains what they will be based on

In the spreadsheet, the term “Constitutional Tribunal” appeared instead “TK J. Przyłębska”, and instead of “media law” a password “Lex TVN”. Another time, the youth were asked: “PiS controls the National Broadcasting Council, the National Court Register, the Supreme Audit Office, or the Ombudsman?”

LGBT resolution. “A typical example of a neo-Marxist dictatorship”

– This is a typical example of a neo-Marxist dictatorship. This type of action by the European Parliament should be strongly condemned because it is …

In an interview with tvp.info, the deputy head of the ministry of education, Tomasz Rzymkowski, emphasized that the competition organized by COPTIOSH does not have the patronage of the ministry.

– They are known to us because they once even contacted us, but it is precisely because of the non-substantive nature of the competition that we have never established any closer cooperation. They can organize these Olympics because this is our current legal status. Whereas today in the Sejm there will be the second reading of the probation act, which just assumes that such situations cannot take place – says Rzymkowski.

See also -> Czarnek: The probation officer will be able to defend the rights of parents

– The point is that without informing the probation officer and consent of the parents, such NGOs entering the content could not do what they wanted. After all, in this case we see the entrance to the school with purely political content relating to the current political dispute. This is what we are supposed to avoid – he assessed.

See how the politicians of the Civic Platform and SLD pursue politics in Polish schools.
Mr. Minister @CzarnekPHave you seen these questions of the national Olympics for high school students? https: //t.co/FgZl8uhC8F pic.twitter.com/krEfDMl2NO

Local government officials all over Poland have recently canceled municipal outdoor New Year’s Eve parties because, as they explained, we have an epidemic. Crown…

The politician believes that a question like “PiS controls …?” it is “non-substantive”. He emphasizes that there are representatives of political parties (in power and in opposition) in various institutions, and this is straightforward from the constitution.

– These questions do not meet the requirements of the methodology of running the competition, and the whole thing is biased. If we ask about the Battle of Grunwald, we know that the correct date is 1410. However, here we are dealing rather with questions about the political sympathies of people who prepared the questions for this competition – said Tomasz Rzymkowski.

See also -> Will there be changes in the calendar of winter holidays? Minister Czarnek comments

In an interview with the tvp.info portal, he assessed that all the confusion was “a perfect example of violations of the school’s apolitical nature by some environments”. At this point, he also referred to the fact that the sponsors of the COPTIOSH competitions awards are representatives of the Civic Platform. – This is a camouflaged attempt by these politicians to enter the Polish school – he said.

On Monday, students return to full-time schooling. The Ministry of Education and Science indicates that the organization of work in schools and …

The firm response of the COPTIOSH coordinator

In an interview with us, the organizer of the Olympics emphasized that the idea of ​​the Olympics organized by COPTIOSH is that students should demonstrate both knowledge and skills, including the ability to analyze and make assessments. – Thus, some questions in the Olympic tests require knowledge alone, and others – evaluation, drawing conclusions and interpreting – says.

Maleszewski emphasizes that in his opinion, for example, the phrase “TK J. Przyłębska” is “absolutely accurate”.

– This is a terminology often found not only in the independent media, but also used by lawyers and constitutionalists who emphasize that under the presidency of Julia Przyłębska, the Tribunal lost its independence. Just like the “independence of the prosecutor’s office” – in the opinion of many lawyers – has weakened – he emphasizes.

This is how the government of Tusk crushed proposals to lower VAT on fuel. “It’s not possible!”

In 2012, PiS deputies turned to Donald Tusk’s government regarding high fuel prices. In response, they read that prices are shaped by the dollar …

Krzysztof Maleszewski admits that from the very beginning the organization of the Olympics was supported by deputies and MEPs.

– The Law and Justice Ministry of Education does not consider the subject of human rights, the European Union or the Third Republic of Poland to be important and important, so it does not subsidize the Olympics organized by us or with one zloty – says.

– On the other hand, we are very much supported by parliamentarians and MEPs, who allocate various valuable material prizes and fund study trips to Brussels – he adds.

Videogames entered his life in the late '80s, at the time of the first meeting with Super Mario Bros, and even today they make it a permanent part, after almost 30 years. Pros and defects: he manages to finish Super Mario Bros in less than 5 minutes but he has never finished Final Fight with a credit ... he's still trying.
Previous Australian Open. Bernard Tomic infected with coronavirus
Next Prince Harry and Meghan Markle decided years ago what their role would be in the monarchy. One photo was a breakthrough