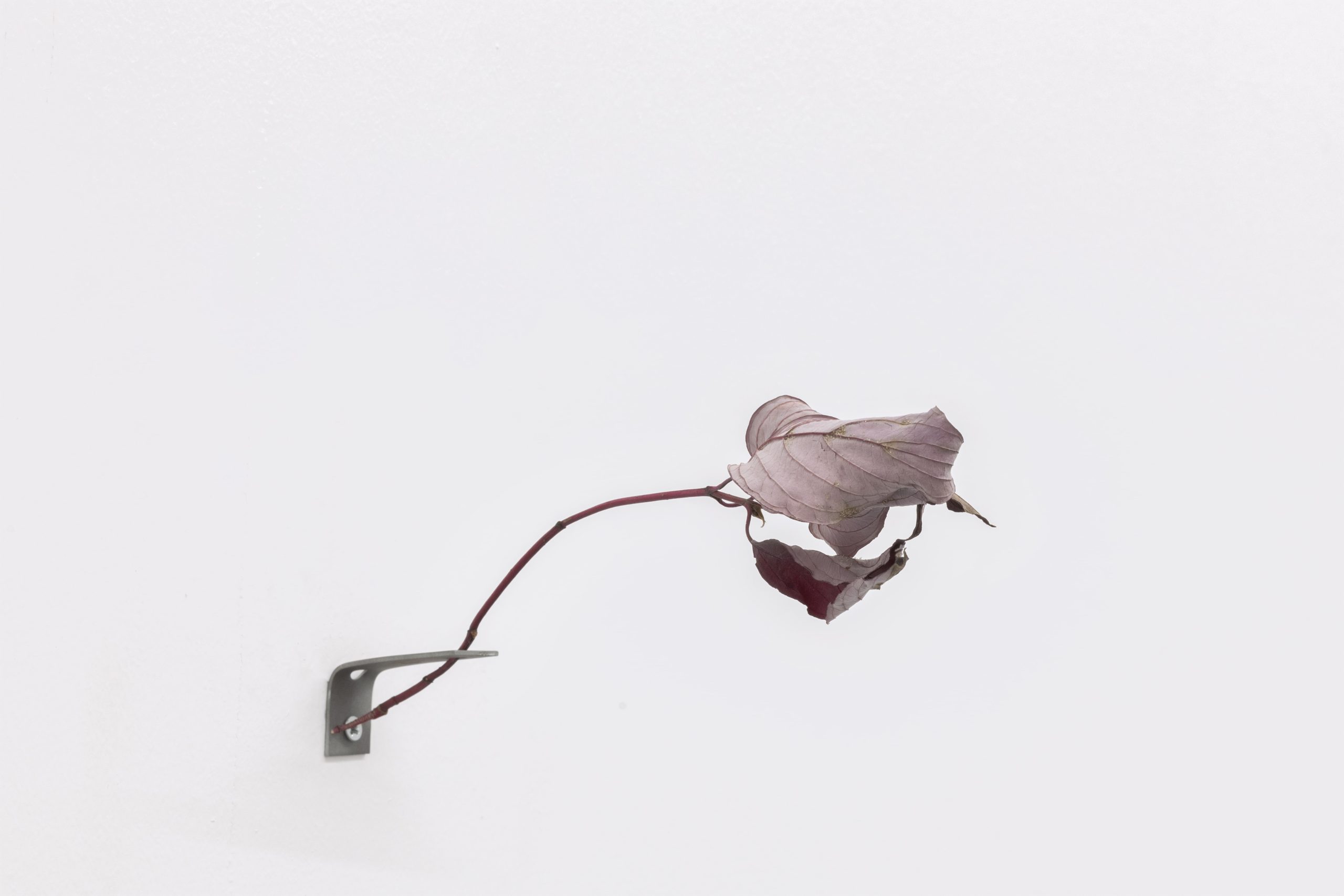 Sending a Letter for Sanding Words. Interview with Daniele Di Girolamo after the Rome exhibition

Daniel DiGirolamo (Pescara, 1995) lives in Malmö, Sweden, where he is completing the Master in Visual Art at the Malmö Art Academy, after a period of training (three and two years) at the Academy of Fine Arts in Bologna.

Author of installations in which sound acts as a transformative element of the surrounding environment, he presented for the section Portfolioof the Quadrennial of Rome, the intervention Sending a Letter for Sanding Wordsanimated by a contrast between natural and artificial elements, placed in dialogue to create what the artist defines as “material rhymes”, poetic juxtapositions made through matter rather than with words.

Could you tell us about your educational path, and the geographies that have shaped it to date?

My journey in art begins at the Liceo Artistico in Pescara. I then attended the Academy of Fine Arts in Bologna with a few months’ exchange of studies at the Academy of Visual Art in Hong Kong. After my studies I lived in Brussels where I was assistant to Luca Vianello, from whom I learned a lot. Now I’m in the middle of the Master in Visual Art at the Malmö Art Academy.

You live in Malmö, Sweden. Could you give us an insight into the Swedish contemporary art scene?

Sweden has a solid system that supports the art world. This favors both the presence of various institutions for contemporary art (for a not very large city like Malmö – 350,000 inhabitants – there are important institutions such as Malmö Konsthall, Modern Museet and the Malmö art museum) and a system of funds, which can be accessed by tender, which support local artists (if you are Swedish or are very active as an artist in Sweden) in the form of scholarships, grant, grants for artists’ assistants, project support, reimbursement for travel expenses; and it is also possible to access state funds to receive support for exhibition spaces run by artists.

Obviously it’s not all that immediate, but the system works and allows you to focus a lot on artistic practice. In addition, education is free, there is a good scholarship system and art schools are well stocked with equipment and space to work. The artistic context takes a little less effort than the Italian one, and is greatly supported by the state system. Who knows if there will be any changes. In September, the government changed in Sweden and many in the art field fear big cuts to cultural funds.

Has living in a highly stimulating place away from home helped your artistic practice?

It helps me grow as a person. We expose ourselves to risk and this becomes a force capable of widening the margins for growth. As a result, the approach that one conducts in one’s own artistic practice and in the works produced also gains from it. For me it’s about physically changing place and habits; putting me in initially uncomfortable conditions. But I don’t know if this is true for everyone. I have friends who haven’t traveled as much as me, but they are more open minded than me. I learn a lot from them even being in a simple kitchen of a provincial apartment, from which I often wanted to escape during my adolescence. Maybe it’s more about the quality of the relationships you establish with people and places. It happens that you take many trips from which you don’t come back enriched, or in which you haven’t left anything significant with anyone. It is not mandatory to travel and it does not automatically open your mind, this is a false myth; it is a subjective matter.

Can you explain to us what “material rhymes” are?

It’s a term I find useful as I work. Refers to when a material of one element of the installation refers you to another through aesthetic and linguistic similarities. This helps me tie all the elements of an installation together and favors the perception of an environment rather than individual sculptures and objects in a room. A bit like the rhymes used in poetry, which give a rhythm and tie everything together, making that poem perceived as a single text and not as individual sentences. The moment you try to fixate on an object, perhaps those shapes or colors quite soon refer you to another element, making it difficult to isolate them from each other, almost as if they could not exist on their own. I always try to create an environment or an atmosphere where each element is just a slightly denser and more visible point in a network of relationships. To do this I not only use material rhymes but also sounds, ambiguous shapes and anything that can help present a changing and elusive world. In this game of references, you have little left to hold in your hands and a perceptive displacement is activated that pushes you to recode all the space you are in at that moment.

Can you illustrate the cross-references and multi-sensory contrasts between organic and inorganic materials?

I honestly don’t find them that opposite when I use them in sculpture. Each material brings with it a series of sensations and suggestions that change in relation to another or more materials. I’m more interested in exploring what comes out of this dynamic rather than just the organic/inorganic juxtaposition. Perhaps this works particularly well because it suggests two very different temporalities and therefore creates more dynamism in some way, and on a perceptual level it could be read as more interesting. It all depends on the context. A dried flower gives us the feeling that it will decompose faster than a metal, but this too oxidizes, rusts, dissolves. Perhaps we perceive the difference because we relate it to human time and how we are made. Surely we identify ourselves more easily in the dried flower than in the piece of metal that will survive the longest. But if we also think of mineral salts that have a fundamental role for all living organisms, or if we change the reference time scales, the differences between materials (but also the hierarchies, including human beings) begin to be less clear-cut .

How much is risk part of your environmental installations?

It depends on how you understand risk. In my works I am more focused on creating the conditions in which an atmosphere can be evoked rather than on achieving a precise final result. This also applies to the work itself. If I am bending a metal I am not interested in reaching a particular inclination or fold, but I am interested in the fact that through folds and inclinations sensations are evoked, for example of fragility, protection and so on. So the work can also be broken, ruined, re-adapted in infinite ways. But once I understand that material a little bit, and understand what sensations and suggestions I can extract from it, I can make new ones that will have that kind of trigger. It is not the precise final image that interests me. I am only interested in the moment it generates those sensations in me and in whoever is watching them, putting them in presence. The greatest risk is to leave it indifferent. Other risks come with the documentation: it’s impossible to report the same atmospheres as when you’re there, but the video allows you to show others, and this is a compromise to be accepted.

You can introduce us to your exhibition Sending a Letter for Sanding Words?

This work was exhibited at Palazzo Braschi in Rome, from 14 October to 13 November, in the section Portfolio dedicated to artists under 35 and curated by Gaia Bobò, on the occasion of the programme Daily, promoted by the Quadriennale of Rome. It is an environmental installation made up of three elements: rotating cylinders hanging from the ceiling, a pair of ground sculptures made of modeled and sandblasted aluminium, and a small dry red twig mounted on the wall and supported by a steel L. The rotating cylinders, hollow and semi-transparent, contain sea sand with not too fine grain. Rotating they make the sand collide on itself; a sound very similar to that of the waves near the shore is generated. There are four of these cylinders scattered at different heights in the room which spatialize the sound a lot.

I like to think that sand can remember something (for example, where it comes from) because it suggests the sound of waves. It is as if the memory of/from the material is extracted through sound. And the sound, always in motion, makes me think of when we process a memory, which changes constantly over time, because we re-process it every time we bring it back to mind. Immersed in this kinetic and sound process of memory, there are on the ground the bowl of sculptures whose sandblasted surface refers to the sand inside the rotating cylinders. In the inner, more hidden part of one of the two sculptures there is a soft lining in faux leather. The sculpture, as it is modeled with the various folds that recall paper, acts as a protective shell of this warmer, softer and more intimate internal space.

The twig on the wall rhymes with the same gesture of the sculpture: as they dry out, the leaves have folded back on themselves, going to hide their inner part which has a much denser and more saturated red color than the outer side. Sculptures and twig are both in this sort of recollection. Regarding the title, “sanding” means smoothing and contains the word “sand”, which returns as material in the various elements of the installation. The smoothing suggested to me the same process that takes place in modeling a memory little by little, whether it is made up of images, sensations or words heard or written.

This content was created by Camilla Bohemia for Unique shapes.

David Martin is the lead editor for Spark Chronicles. David has been working as a freelance journalist.
Previous Amber Heard returns to the attack against Johnny Depp
Next Onana, the exclusion becomes a case in Cameroon