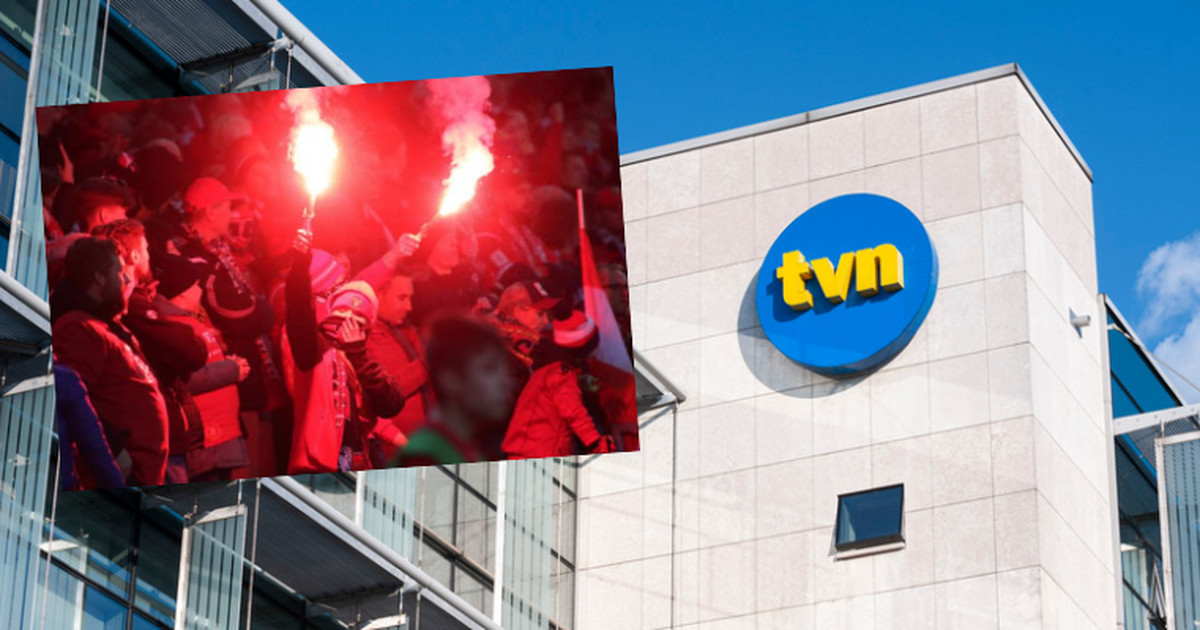 Ski jumping on TVN. The station returns to broadcasting sports after many years

TVN fans have not been associated with sports broadcasts in recent years. Not only that, one of the most popular stations in Poland even avoided them. Until recently, it even happened that the only event of the year that could be included in the sports coverage was the live broadcast of the match of TVN stars versus politicians. And few people remember that in the past it was completely different, and on the air of the station you could see the Polish national team or NBA matches. And it’s live. 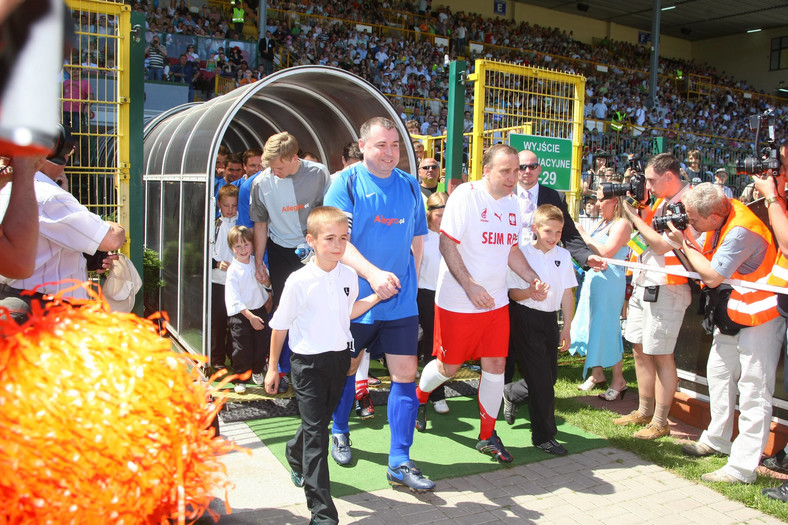 TVN started broadcasting on October 3, 1997 at 7.00 p.m. When it comes to sport, the beginnings were very modest and boiled down to a short service, which after “Fakty” was run by none other than Maciej Kurzajewski. Klaudia Carlos quickly joined the still small team led by the well-known TVP Karol Stopa, followed by other people.

We still had to wait for broadcasts and more serious events. In 1998, TVN surprised Poland with the acquisition of rights to the NBA league in which the era of Michael Jordan and the great Chicago Bulls continued. First, the Parisian tour of the Bulls from the Windy City was shown live. Jordan’s team defeated the home team, Paris Saint-Germain. It was not so much a great prelude to the entire season of the best basketball league in the world, but an excellent promotion of the project for the still new Polish broadcaster, because matches from France were held at a friendly time for Polish viewers, not in the middle of the night. 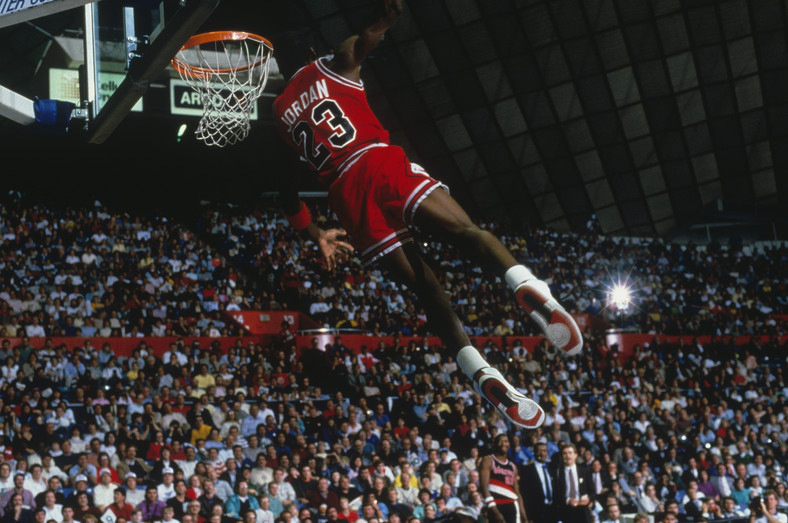 It wasn’t long before NBA fans got used to one live stream a week and one match played. Wojciech Michałowicz was an excellent commentator of these events. The offer was enriched by the programs “Throw for 3” and “NBA Action”, which allowed for a more complete insight into what was happening on the dance floors across the ocean. The NBA disappeared from TVN a little unnoticed in 2001. Viewership fell. Jordan was no longer in the weakening Byków team. Television with a circular logo, however, began to operate in a different field when it comes to sports.

The Polish football team for the first and … only time

In February 1998, football fans in Poland were surprised when it turned out for the first time that TVP would not show a match of the national team. A friendly meeting between Israel and Poland from the Ramat Gan stadium in Tel Aviv was shown by TVN, and commented by Janusz Basałaj, who was borrowed from the paid Canal Plus. Biało-Czerwoni smoothly lost 0: 2, and TVN never showed their confrontation again.

There was also the station’s brief but tumultuous romance with the UEFA Cup, to which Ajax Amsterdam, then still a European powerhouse, a club that won the Champions League in 1995, went. Before the match against Udinese Calcio, there were spectacular announcements with the participation of Andrzej Rudy, the only Polish player in the team from the capital of the Netherlands, who personally invited them to the match. However, the flap came out. A well-known radio journalist, Tomasz Zimoch, was hired to comment on the meeting. The picture of the match was so often broken, however, that … in fact, the rapporteur had to present to the audience a radio commentary, in line with his regular profession. 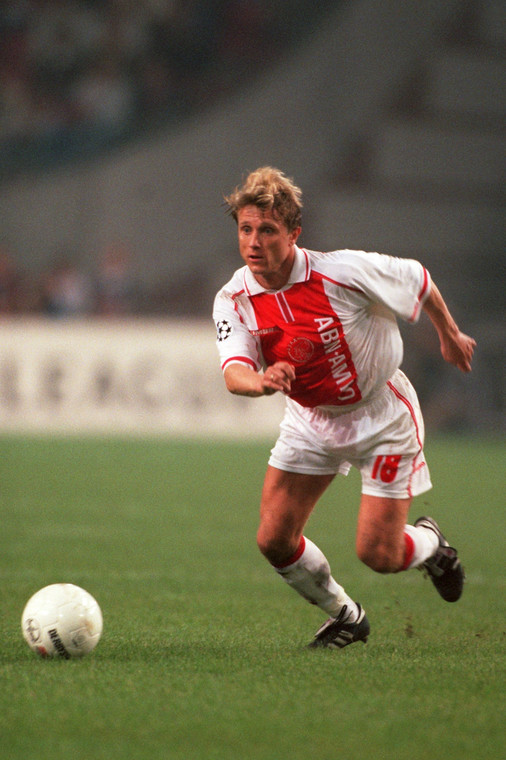 Andrzej Rudy as a footballer of Ajax Amsterdam

The adventure with European cups did not last long. Before the 1998 World Cup, TVN decided to show a few friendly matches involving the strongest teams, such as the Netherlands – Nigeria match. For a short time, viewers of the private broadcaster could watch the matches of Polish basketball teams in European cups. Thus, bands such as Anwil Włocławek or Bobry Bytom played host to the air. The most interesting was yet to come.

Apart from the NBA mentioned at the outset, there was no continuity in it all. Sports broadcasts on TVN, if they appeared, were incidental and you always had to borrow commentators from other broadcasters.

In March 1999, the growing power of Wisła Kraków offered TVN broadcasts of all league matches played at its stadium. There has never been anything like this before. There were no thematic sports stations yet, there were much less coverage than today, and no team could count on 100 percent. her meetings will be shown on television, regardless of the class of the rival. – We have been talking to TVN for a long time, they should be finalized this week – Zdzisław Kapka, the manager of the company from Wiślac, told “Dziennik Polski”. 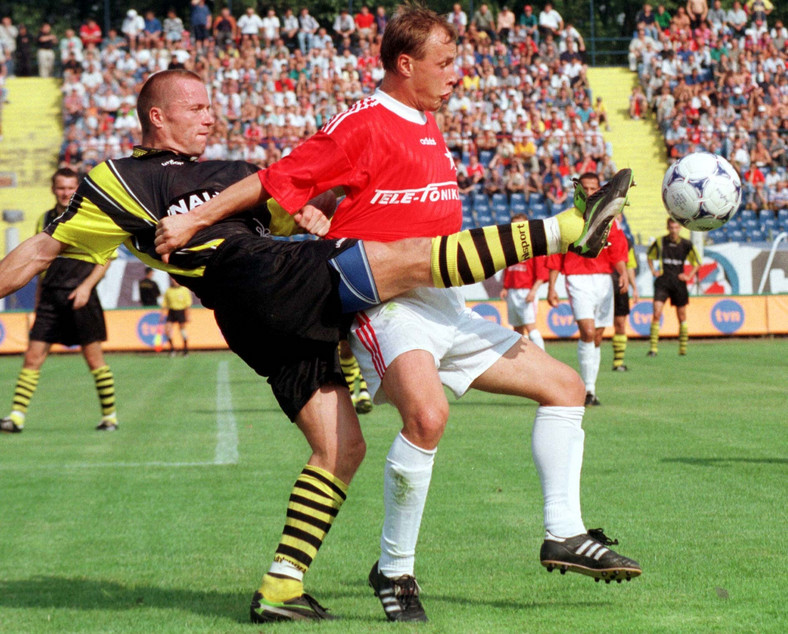 August 6, 1998 – Wisła Kraków – Ruch Radzionków: one of the many matches of the White Star broadcast by TVN

The transmissions started “from the hoof”. It was said that TVN paid $ 2 million for the opportunity to show the meetings of the White Star for six months. A permanent set of commentators was made, including Marcin Grzywacz and Artur Kulikowski from the Polish Radio program 3. For this, you had to rent a transmission vehicle from Wizja Sport. The meetings were shown from seven cameras, but it was noticeable that, at least for some of the production team, this type of broadcast was a novelty. Often times, the video from the lead camera seemed very distant, which made the relationship look poor.

Over time, Marcin Grzywacz and Artur Kulikowski were also accused of partiality and excessive support in Wisła Kraków in their commentary, even though neither of them had been previously associated as a fan of this club. Both were replaced with one commentator in the person of Tomasz Brzeziński from Radio Classic in Łódź. In the Polish Ekstraklasa, from the perspective of the television viewer, there was a “neighborhood breakdown”. That is, Wisła’s home matches were shown by TVN, Legia Warszawa’s matches from its stadium had a paid Wizja Sport in the package, the remaining part of the league cake belonged to Canal Plus with incidental coverage of Polish pitches on TVP. This state of affairs lasted until the end of the 1999/2000 season, which means that TVN showed meetings with Krakow for a year and a half.

TVN was getting less and less sporty, but there were a few more twists to give viewers this kind of excitement. In the 2004/2005 season, a private station “took” matches of Polish teams in European cups. – The contract with TVN is valid until the end of the 2005/06 season. The station will be able to show matches of Polish teams in the qualifying rounds of the Champions League. At this stage of the competition, clubs have rights and can dispose of them through media agencies. On the other hand, the rights to broadcast the matches of the respective Champions League, which starts with a group competition, are owned exclusively by UEFA and sold directly to television stations. Currently, Polsat and Telewizja Polska have the right to show the Champions League matches, said the head of SportFive, Andrzej Placzyński, to PAP. 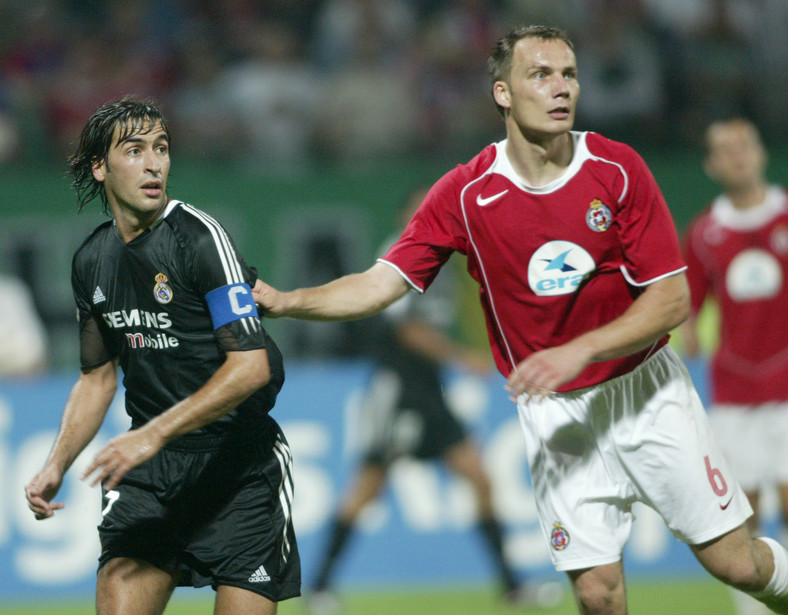 The crowning achievement of all this were Wisła Kraków’s matches against the galactic Real Madrid, where Andrzej Sołtysik, currently known for his role as the host of the “Dzień Dobry TVN” program, played the role of the studio leader and the maddening reporter. While the broadcast from the stadium at Reymonta could not be faulted, the commentators’ voices on the Santiago Bernabeu were clearly ahead of the TV picture.

According to the contract, Polish clubs were to be hosted on TVN for two years during guest appearances in Europe, but the contract was terminated after just one year. Instead, the sport-hungry viewers could count on a couple of interesting friendly matches, such as Legia – Bayer Leverkusen or Legia – Bayern Munich in 2005. A year earlier, a charity meeting between Wisła and Legia was also shown, commented by Tomasz Smokowski and Andrzej Twarowski, loaned from Canal Plus. 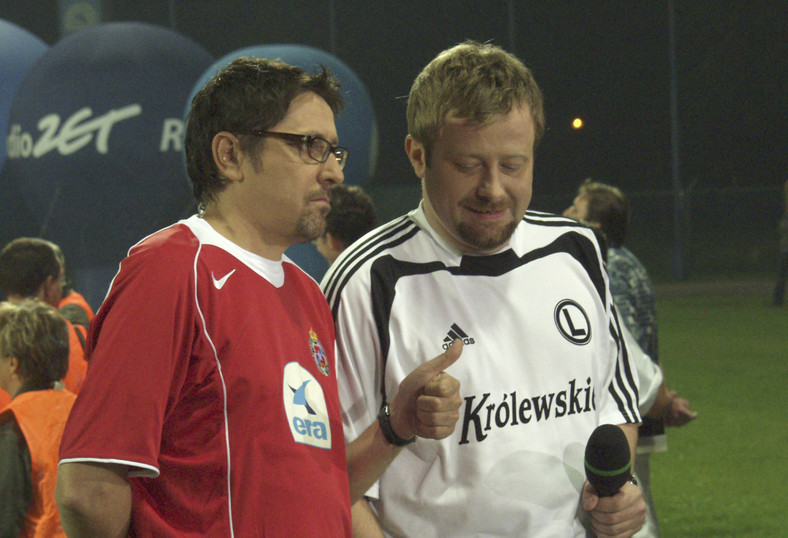 Andrzej Sołtysik and Olaf Lubaszenko during the Wisła – Legia match

When the Polish Cup hurt “Faktom”

Ekstraklasa was then in the hands of only Canal Plus, a paid and encrypted broadcaster, which at some point stopped even allowing other stations to show shortcuts. The Polish Football Association was looking for a title sponsor of the tournament, and the competition was joined by two mobile networks – Era and Idea.

The latter won, and one of the conditions of the tender was to be a league magazine with abbreviations of all league matches on open television. Orange Ekstraklasa magazine was created by TVN and was led by Piotr Salak and Paweł Wilkowicz, who combined work on the project with writing for the press.

In 2008, there was already a thematic daughter station of TVN called nSport, which had rights to the Polish Cup, among others. The final of these games, as an important event, had to be broadcast nationwide. TVN was afraid of the Wisła-Legia match, but not because it could not handle the broadcast. It was about 5 pm that raised concerns, and all employees seemed to be keeping their fingers crossed for the fact that there would be no extra time. This kind of extension of the match meant that there must be a collision with the main edition of “Fakt”, which has been presented for years, invariably at 19.00.

Of course, the black dream of the directors and presidents of the stations has proved to be true. There was not only extra time, but also penalty kicks. Nay! The audience stormed the pitch and ran, among others, around the car standing around the corner of the pitch, prepared for the best player of the match – Roger Guerreiro. The “facts” were delayed quite a lot. It was the last broadcast of this type by TVN, which seemed to be discouraged by all this for years to play the sport. 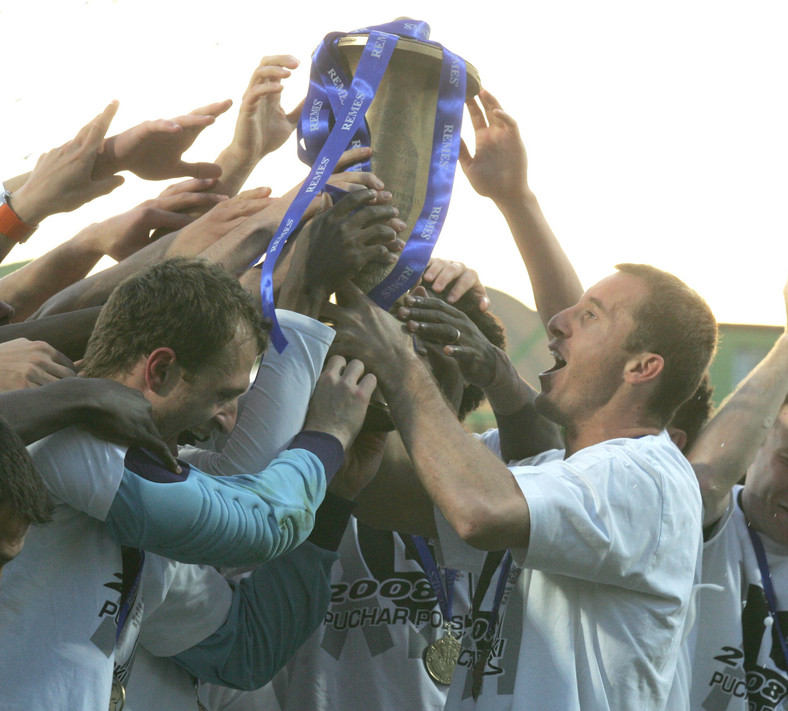 Joy of Legia Warszawa players after the final of the Polish Cup on May 13, 2008.

Ski jumping and the return of sport

Only now, years later, TVN offers its viewers sports emotions in the form of ski jumping, a discipline that the Polish nation has come to love. TVN viewers are to see almost all competitions. The studio is to be run by Sebastian Szczęsny, who has worked for the Polish Television for the last 17 years with Damian Michałowski.

The broadcasts are to be created in cooperation with Eurosport, which belongs to the same owner as TVN. The jumps will be commented on by Marek Rudziński and Igor Błachut, known from Eurosport. – The studio will be ultra-modern. There has never been anything like this in ski jumping before. There will be connections, there will be teleportations, holograms, and a giant hill-shaped table. It will be a real show – said Michałowski in the program “Get up and know”. – There will be interviews, results and information appearing on special virtual screens – Szczęsny added.

This kind of TVN offer, apart from jumping, is also to be enriched by cross-country skiing. Time will tell if the station liked the sport for a longer time and whether it decides to apply for the laws concerning other sports. Jumping and cross-country skiing will be other disciplines after football and basketball that will be broadcast on TVN.

David Martin is the lead editor for Spark Chronicles. David has been working as a freelance journalist.
Previous Immigrants have reverted to the old strategy. One by one the “couriers” came. Police and military personnel pelted with stones [FOTO]
Next Georgia. Former president Mikheil Saakashvili ended his hunger strike. It is in serious condition