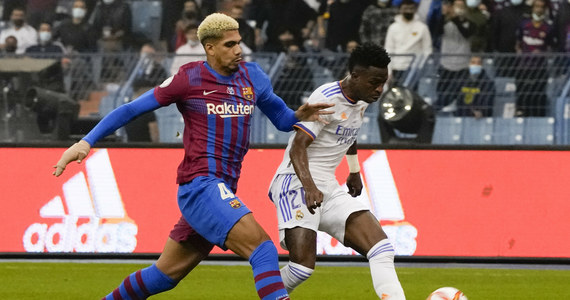 The most emphatic words in the Barcelona daily “Sport” were written by one of his columnists. The text is that Real Madrid’s past has barely dealt with Barcelona’s future. The author proves that footballers in the decadence stage are still the strength of the Royal Kings: Luka Modric, Karim Benzema and Toni Kroos – all in their thirties. Meanwhile, the youth in Barcelona are taking over: Ansu Fati, Gavi, Nico Gonzalez, Pedri, Ronald Araujo, Abde.

This, of course, is only partially true. One of the best players in La Liga today is the 21-year-old Vinicius Junior, who scored a 1-0 goal for Real yesterday. In Barcelona, ​​as in Real, there are still veterans playing. Sergio Busquets, Jordi Alba, Dani Alves, Gerard Pique remember the times of triumph in the Champions League in 2009, that is almost 13 years ago.

FOR ONE GOAL. Święcicki: FC Barcelona is hostage to its success. VIDEO
POLSAT GO

The club from Catalonia invests in young players, primarily alumni due to the economic crisis caused by life beyond their means and absurd transfers Philippe Coutinho, if Antoine Griezmann. Is the difference between Real and Barcelona shows an excellent, tough game in Riyadh, or 17 points advantage of the Kings in the La Liga table?

Team Xavi Hernandez She played well with Real, sometimes very well. But she did not avoid her fifth consecutive defeat at El Clasico. She had a worse series only in the years 1962-1965, when she lost to Real seven consecutive matches. In turn, the best streak of the Catalans in matches with the Royal Clubs was five consecutive wins in 2008-2010, when their coach was Pep Guardiola. It was the best team in the history of the Camp Nou club.

For the third year now, Barcelona is going through a deep crisis. Three coaches (Ernesto Valverde, Quique Setien and Ronald Koeman) paid for it with a job. Xavi’s work raises great hopes for a revival of the team. The progress is not stunning. The team from Camp Nou is sixth in the Primera Division table. The new coach gives young people a chance, some of them are pupils. In Riyadh, Pedri and Ansu Fati returned to the game after injuries and illnesses. The latter scored a 2-2 goal which gave extra time. Barcelona’s youth raises legitimate hopes.

It does not change the fact that the winger brought from Manchester City from 55 million euro Ferran Torres debuted without a flash. Coming back from injury Memphis Depay and Frankie de Jong they failed again.

The most Dutch go to the team who was counted on the least: the forward Luuk de Jong Xavi may have to send back to Sevilla due to the Barcelona wage cap. “Who is De Jong bad and who is good?” – asks the daily “Sport”. Frankie was paid 80 million euros to be one of the leaders, Luuk in Seville was not in the squad, while for Barcelona he has already scored three goals in January.

The situation is schizophrenic Ousmane Dembele, who plays well makes a difference on the pitch but doesn’t want to extend his contract. At the club, they do not know what to do – treat the French as the star of the team, or send a penalty to the bench? Xavi is in a lot of trouble. 38-year-old right-back Dani Alves it is not a solution in the long run.

Despite losing to Real, Barcelona returns from Riyadh with the shield. “Barcelona is regaining its greatness and losing to all honors,” announces “Sport”. “Mekycho in Riyadh was won by Real, but Barcelona also came out victorious.” – adds “El Mundo Deportivo”. The depressed Catalans searched for light in the tunnel. It couldn’t have been a victory, it had become a defeat.

Barcelona doomed to be devoured by Real?

Xavi before the Super Cup: – This could be a turning point for us

David Martin is the lead editor for Spark Chronicles. David has been working as a freelance journalist.
Previous Let’s grab the pockets. Higher inflation can take up to 10 years
Next OnePlus 10 Pro is the undisputed leader! The record holder was sold out in a second