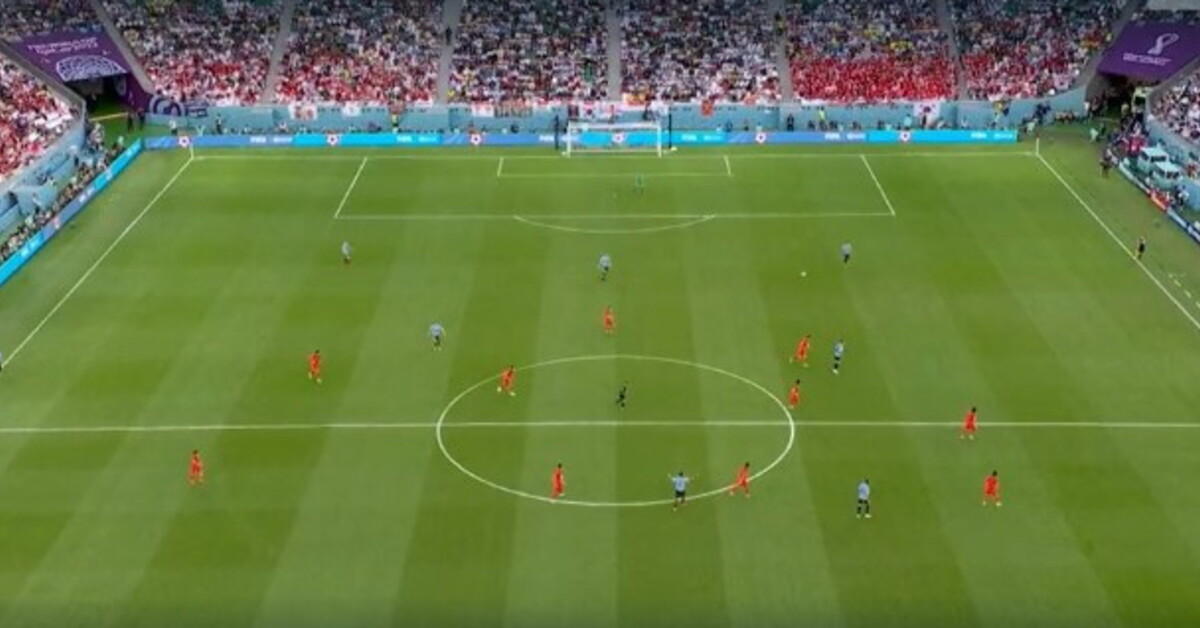 The world championships have always been an opportunity to take stock of the more widespread tactical tendencies. A World Cup, in short, to understand where football is going. Now that’s not the case anymore. Premier And Champions League they collect the best of world football and also the A league, in terms of game organization, is considered a point of reference. No doubt, however, that Qatar 2022 can also make us understand what is the direction of world football.

The fact that this world cup is held in winter, in the middle of the competitive season, has given undoubted advantages from an athletic point of view but has limited the time available to the coaches to give a precise strategic imprint to their teams. Obviously, therefore, the focus was mainly on the defensive compactness. The Qatar 2022 teams press little and retire, in the non-possession phase, creating two narrow lines so as not to allow the opponents to exploit the half-spaces. Morocco’s match against Spain is the programmatic manifesto of this game logic. Defensive line at medium height, not too low so as not to risk being closed in the box, a pivot in front of the defence, four midfielders in line and a central striker. Concession of the dribble to the opponents at the start of the action and search for the closure of the passing lines (positioning himself to control the area without having the man as a reference). In addition to the central striker, one of the half wings comes off the other Spanish central defense with the task of shielding Busquets, the director of the “Roja”, while the offensive laterals are ready to climb towards Luis Enrique’s low wingers. Possession of the ball was useless and neither were the rotations studied by the coach (Llorente who moves into the role of intermediate with Pedri who widens at the start of action on the right, or the combined movement between Dani Olmo and Asensio on the left).

Fundamental, when you have little time to work on the principles, is the scientific study of tender plan. The best example is Saudi Arabia’s disposition against Argentina. Renard lined up his players with a very high defensive line, ready to push the opponents offside in an arrangement from the 70s, 80s and early 90s, when the offside tactic was the daily bread of the Belgian, Dutch teams or of Sacchi’s Milan. The change of the rules, with the passive offside not punished, had put it on the back burner, before being relaunched by the technology (with the semi-automatic offside). So many risks for the Arabs, but so much surrender with an extraordinary victory.

In the defensive phase almost all the teams resort to the dear, old, blanket of Linus del 4-4-2. If the arrangement is with three half strikers behind the central attacker, with the ball to the opponents the attacking laterals get in line with the two midfielders and the attacking midfielder takes up a position alongside the striker. With the 4-3-3 formation, he is one of the midfielders to flank the central attacker with the offensive wingers climbing alongside whoever presides over the middle department. The teams lined up with the three defenders become five with the ball to the opponents (and this is obvious). When they are placed with two demi strikers (behind a central forward in a 3-4-2-1 formation), they create a sort of rhombus to close off the central outlets, with one of the midfielders standing up to shield the opponent’s play. It has also happened to see 6-man defensive arrangements (starting from a 4-4-2, with the wingers falling back, see Poland, or from a 5-man defense, with a midfielder climbing behind, like Arabia in the final match with Argentina).

The closing of the spaces is the prelude to speed recovery actions. The best in this field are Holland, Morocco and Japan. Van Gaal’s team is almost surgical in overturning the action by going to a thousand, with moving the ball from the center to the outside to search for the ball again in the middle, where the synchronized movements of those occupying the area make readings difficult adversaries. The Moroccans make more use of the one-on-one ability of wingers such as Boufal and Ziyech, while Japan is able to restart at very high speed with coordinated movements.

While its star performer, Spain, has come out shattered, there’s no denying that the positional game (the one who tries to manipulate the opposing structure with the aim of finding players between the lines) is the point of reference for the teams trying to impose their game. There is something for all tastes (although obviously it depends on the characteristics of the players). Brazil is a mix between the positional game and the jogo bonito of its tradition. Set up in threes, he moves a low lateral towards the centre, keeps Casemiro covering and occupies all the vertical corridors with Rafinha and Vinicius on the wings, and Neymar, Paquetà (the other theoretical midfielder) and Richarlison in the centre. In the development there is great freedom of movement and the possibility of unleashing the imagination in tight combinations between particularly technical players. Argentina has specific characteristics but a lot depends on Messi’s movement, who is free to move where he wants. Alvarez rarely stays wide and goes to occupy the center forward position leaving the wing to the full-back or intermediate, who have a particularly important role. It is often sought, at the start of the action, to move it outwards or to insert it at speed in the area, in the finishing area. Scaloni doesn’t mind switching to a 3-5-2 when the situation requires it. Particularly interesting, and beautiful to see, the constant movement of the midfielders, defensive and offensive, of Portugal. The set of such technical players (Bruno Fernandes, Bernardo Silva, Joao Felix, Otavio, etc.) allows Fernando Santos to leave the initiative to the imagination of his champions, who swap positions by alternating setting, finishing and finishing term of movements that free up the space that is immediately occupied by a partner.

Brazil, Portugal and England are a mix between 4-3-3 and 4-2-3-1. The position of Neymar, Bernando Silva (or Bruno Fernandes) and Bellingham (or Mount) makes it difficult to read the game system, given that they can position themselves either behind the striker or as third in midfield. On the other hand, Croatia and France, the two finalists from four years ago, have all their own characteristics. Dalic’s selection lines up with 4 defenders, three particularly technical midfielders, two wide strikers and a centre-forward. The organization is not the strictest but takes advantage of the natural associations between top class players. Deschamps’ national team, on the other hand, always seems to be the most complete. To an infinite squad, a fluid disposition is added with Griezmann who can play as attacking midfielder and midfielder, Mbappé who starts wide and then cuts towards the centre, Dembelé who occupies the right wing, Giroud who advances the action and finishes and Rabiot which fits. Great forward imagination, rigid defensive 4-4-2 which, when Mbappé can’t make it back, can predict Griezmann’s retreat with Rabiot climbing to the left.

Offensive phases particularly appreciable, and organizedthose seen, in flashes, observing Canada, the United States and South Korea. The Canadians were able to offer club team plots, with combinations for chains and the search for the third man, Berhalter’s selection expressed the best in the opening goal in the first match against Wales, with the centralization of Pulisic for the cut of the other full-back Weah, while Paulo Bento’s national team was able to move up the field with game changes and combinations between high-back, low-back and intermediate, with insertions particularly effective deep.

David Martin is the lead editor for Spark Chronicles. David has been working as a freelance journalist.
Previous Star Trek 4: Zoe Saldaña comments on the latest delays | Cinema
Next AnnaSophia Robb as Carrie Bradshaw on the red carpet