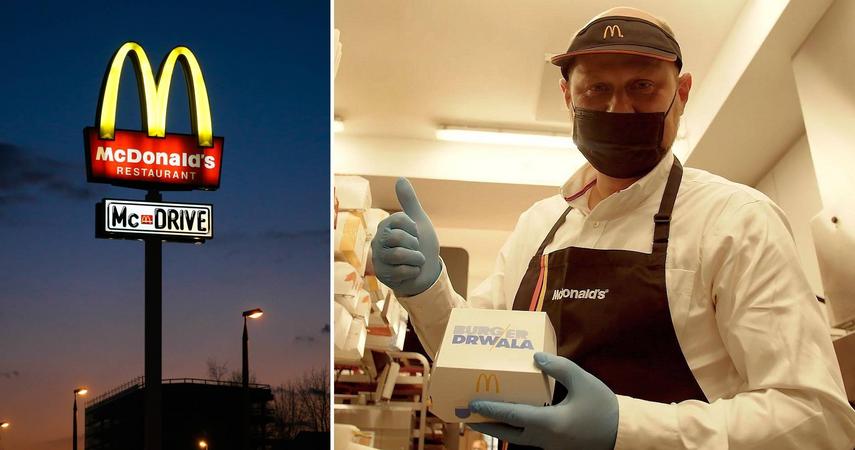 The first Drwala Burger this season was created in front of our camera. It was prepared by the president of McDonald’s Polska

The Drwala burger is not only a culinary hit of Polish gastronomy, but also a specific cultural sensation in our country. Every year McDonald’s customers wait for late fall for the popular “Lumberjack” to return to the offer and they can wait in long queues for placing an order. In 2021, the Drwala Burger will appear in all restaurants of the chain on November 24. One of the first sandwiches this year was prepared in front of our camera by the president of McDonald’s Polska, Adam Pieńkowski.

The numbers alone prove the popularity of the Drwal Burger. This is number one when it comes to seasonal produce. There are restaurants that sell up to 2,000. such sandwiches a day, but the average is about 700-800 pieces in a restaurant says Adam Pieńkowski in an interview with BI Polska.

Where does the popularity of “Drwal” come from?

Where does such success come from? According to the president of McDonald’s Polska, it is the result of repeatability, customers have been receiving the same product and taste for 12 years. Beef, melted cheese, a specific sauce and a classic burger bun with cheese and bacon are listed by Pieńkowski and revealed that apart from the already known versions of Drwal (spicy, sweet with cranberries, with chicken and double ed.), Available from November 24, the chain is preparing a “surprise” for January. There will be a new ingredient, a new area of ​​flavor, he explains.

An additional factor influencing the popularity of this caloric sandwich, according to the president of the network, is the period in which it goes on sale in late fall, when human organisms have an increased need for calories. An attempt to introduce it to the summer offer a few years ago did not bring a spectacular success comparable to autumn returns.

According to the information published for several days, the price of a traditional Drwal Burger this year will amount to PLN 17.4, which will be an increase of PLN 0.5 compared to PLN 16.9 for the same sandwich last year. Adam Pieńkowski openly admits that the inflation that the Polish and world economy is struggling with makes “the increase in costs will be reflected in the price of the end products.”

This is a special period in the history of the company while I am running it. The cost pressure is very high – says Pieńkowski and emphasizes that not only the prices of semi-finished products have increased, but also the costs of running a business, including electricity and other utilities prices. Additionally, there was a weakening of the zloty, which has a negative impact on business, which has to import some semi-finished products from outside Europe.

The variety offered by video games never ceases to amaze him. He loves OutRun's drifting as well as the contemplative walks of Dear Esther. Immersing himself in other worlds is an incomparable feeling for him: he understood it by playing for the first time in Shenmue.
Previous Lech Poznan. Adam Owen will go to Spartak Moscow?
Next Dynamo – Bayern Munich. Robert Lewandowski is the top scorer in 2021.