The history of the Antica Pizzeria da Michele

In Forcella, in via Pietro Colletta, there is what everyone – insiders and non-experts alike – defines as the “Temple” of pizza. Let’s talk about the Antica Pizzeria da Michele which has been a point of reference for Neapolitans and tourists for over 150 years. It all started with Michele Condurro, Salvatore’s son, who decided to make a change in the family passion – which began in 1870 – by entrusting himself to the masters of Torre Annunziata.

The first room was opened in 1906, but following the construction of the Ascalesi hospital, the business moved to its current location. After Michele, the reins passed into the hands of three of his sons: Salvatore, Luigi and Antonio. The three gave continuity to Michele’s work and – in addition to the technical aspects in the strict sense, linked to the preparation of the pizza – they also passed on this “fidelity to the origins” to their children and grandchildren. 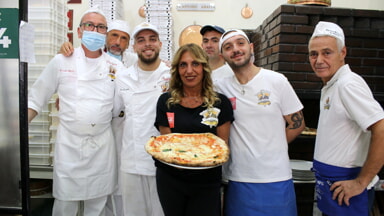 It is no coincidence, in fact, if the place looks the same as it was over 100 years ago. It is no coincidence that even today the pizzas offered – at very popular prices – are only the margherita, the marinara and the Cossack. NapoliToday entered the famous pizzeria with its cameras, protagonist of the 2010 film “Eat, pray, love” with Julia Roberts. We were welcomed by Daniela Condurro, Michele’s niece, who told us this glorious story made of passion and tradition.

David Martin is the lead editor for Spark Chronicles. David has been working as a freelance journalist.
Previous Jared Leto and Anne Hathaway in the trailer for the AppleTV+ series
Next Why is David O. Russell’s new film a flop?